The €5.300 Mixed Max No Limit Hold’em Event #3 played out it’s final heads up matchup yesterday, with the last two players vying for their first WSOP bracelet. The final had been set on Wednesday when the semi final matchups had been contested with Noah Schwartz playing Darko Stojanovic and Jason Mann playing Dan O’Brien. The first bustout took a single hand when Stohanovic shoved his 318,000 stack from the button, and Schwartz made the call for his last 189,000. Stojanovic turned over A

which needed to hit against Schwartz’s 9

. The board ran out A

ending Schwartz’s dreams of taking the title. The other matchup lasted a little longer and ended with this hand. O’Brien opened his button with a min bet to 20k, and Mann three bet shoved for around 200k. O’Brien snap called with K

, and was miles ahead of Mann, who was only holding Q

. The community cards were dealt with Mann praying for a miracle, but cards ended up showing 4

, sending Mann too the cashiers cage to pick up the cash for his third place. 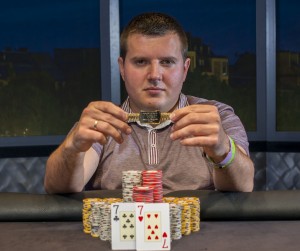 Darko Stojanovic entered the final matchup with only 507,000 compared to O’Brien’s stack of 1,594,000. The first key hand happened in only the second hand when O’Brien opened his button and saw Stojanovic make the call out of position. The 3

flop was spread out over the felt and Stojanovic checked raised to 90k over O’Brien’s half pot bet. O’Brien slid into the tank as he played with his chips, and eventually made the call. The turn was dealt to show 2

and Stojanovic had obviously decided that slow play wasn’t getting him anywhere, and he pushed his remaining 407k into the middle. O’Brien went back into the tank, and after a good long wait, made the call. Stojanovic flipped over 2

for two pair, while O’Brien was only holding 7

, leaving him hoping for either a seven or the board to pair to give him a better two pair. The board did pair, but unfortunately for O’Brien it was 2

, giving Stojanovic a full house, and the pot. The battle between these continued, but it all ended in hand #53. The chip counts from the start of the matchup had been essentially reversed and Stojanovic opened with a min plus bet from the button, and O’Brien made the call after a short trip to the tank. The 4

flop was fanned out over the felt and brought a check from O’Brien. Stojanovic continued his aggression and fired out 53k, only to see O’Brien fighting back with a 130k check raise. Stojanovic pushed back, announcing he was all in. O’Brien was pretty much pot committed at this point, and called off his last 400k. Stojanovic was ahead with his 7

, left calling for a heart or an ace. The turn was the J

, helping no-one, and the river sealed O’Brien’s fate with the 8

. The final results of Event #3 were: