Halloween is right around the corner, which means candy, confections, and costumes! Unfortunately, if you’re looking to dress up in a poker-themed costume this Oct. 31, your options are pretty limited. You can either dress up in suggestive (and revealing) woman’s attire, or you can be a playing card—-not exactly the coolest “card in the deck.” With that being said, the poker world is no stranger to weird and wacky costumes, so we’ve gone ahead and compiled a list of our favorites. Some of the costumes on this list are a result of losing prop bets, while others are just pure, unadulterated silliness (looking at you, Phil). 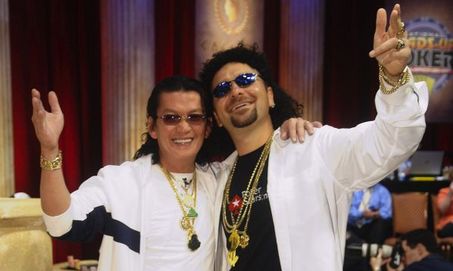 Negreanu is famous for his spot-on Scotty Nguyen impersonation, but he took it to another level during his match against the “Prince of Poker” on Day 2 of the 2009 NBC Heads Up Championship. Gone was the wiry little Canadian, and in his place, thanks to a fake mullet, sunglasses, and a pile of jewelry, was the 1998 Main Event champion.

Kara Scott as a Bunny 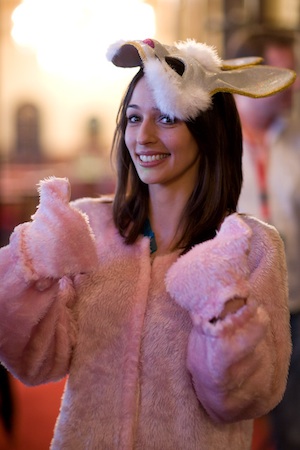 After losing a prop bet with Hardcore Poker Radio host Chris Tessaro, in which she said she would cash in the Warsaw EPT, Canadian poker player/television host Cara Scott was forced to wear a bunny suit while she was doing live updates from an event in Sam Remo. 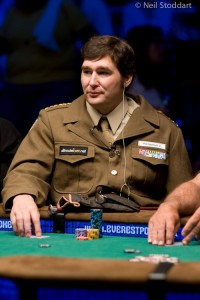 Phil Hellmuth has worn many costumes to poker events, and each one is more ridiculous than the last. At the 2008 WSOP Main Event, he dressed up as World War II Allied leader General George S. Patton. Something tells us that the famously stern Patton would not have approved. In fact, he would have probably made Phil cry like a baby. Speaking of…

Phil Hellmuth as a Baby 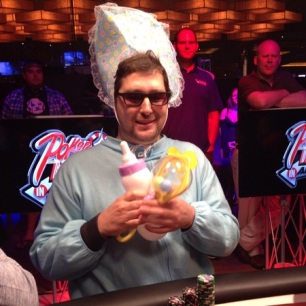 This is the perfect costume for Phil, because we can’t think of a bigger baby in the world of poker than the “Poker Brat.” Somebody go find this guy his mommy.

The young cash game savant is no stranger to weird prop bets, and as a result he’s also no stranger to wearing really weird hats, the most of famous of which is the flamingo head he wore for four full days during the 2008 World Poker Tour Championship. Dwan would eventually finish 9th in the event, winning $184,670. 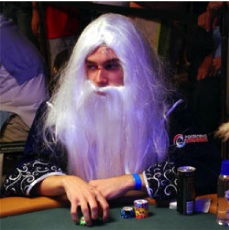 Not only did Brent Cahail lose the 2008 WSOP $2,000 NLHE event to his own roommate Blair Hinkle (ouch), he was also forced to wear a wizard costume for Day 1 of the Main Event. Unfortunately, that’s where the magic ended—he was eliminated on the first day.

Bertrand Grospellier as The Joker 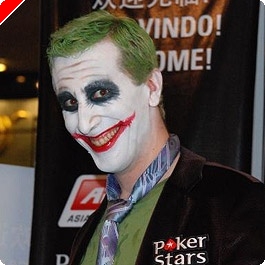 During Day 1b of PokerStars APPT Macau in 2008, “ElkY” decided to dress up as the “Crown Prince of Crime.” We’ve got to admit, he looks a little spooky.

Phil Hellmuth as a Racecar Driver 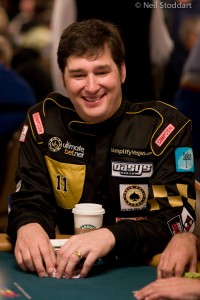 Phil’s appearance as a racecar driver at the 2007 WSOP Main Event ended in a complete disaster when he crashed his car in the parking lot at the Rio. Only Phil could screw this one up. 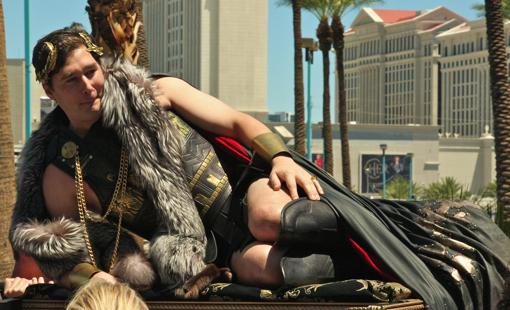 Phil’s appearance at the 2009 WSOP Main Event is fitting, because Phil’s opinion of himself is so overinflated he probably thinks that he’s on par with the historical father of the Roman Empire, Julius Caesar. Check out those short shorts—does the man have no shame?

Phil Hellmuth as an MMA Fighter 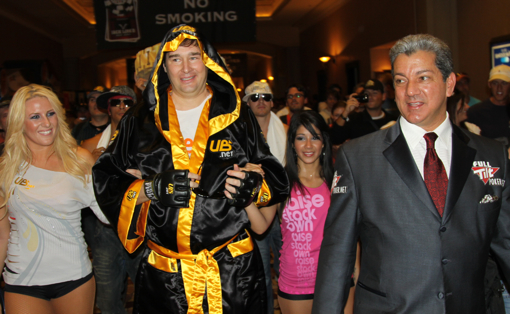 Not only did Phil Hellmuth show up to the 2010 WSOP Main Event dressed as a mixed martial arts fighter, he also came down to “the ring” with UFC announcer Bruce Buffer. Too bad he got knocked out early.

Joe Sebok as Spider-Man, a Kangaroo, Robin, and Wonder Woman

After losing a prop bet to friend and fellow poker pro Gavin Smith, Joe Sebok was forced to wear a costume on each of the first four days of the 2006 WSOP Main Event. Which one is your favorite?

Phil Laak as an Old Man 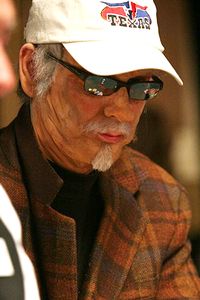 This might be the craziest costume of the bunch, because it created such a stir that a new rule was instituted by tournament officials–the “Phil Laak” rule made it against the rules for a player to wear a mask at the table. Known for his table antics, Laak spent six hours getting makeup done for his “Old Man” costume, which was likely inspired by Johnny Knoxville’s “Bad Grandpa” getup from Jackass. Suffice it to say that the poker player known as “Walter” will not be making another appearance during a WSOP event.