Most poker players have dreamed about making the biggest final table on the yearly poker calendar, although probably most of them never realize the amount of taxes they would have to pay if they actually did win the Main Event.

Looking back at the winners of the last 10 Main Events, we rank players by the amount of money they actually won after taxes. 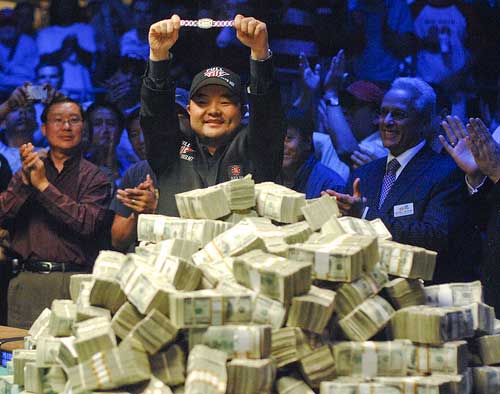 It wasn’t the taxes that killed Jerry Yang’s $8.2M payday, but rather his failure to pay them in the first place. After his win, Yang did pay his California state tax bill of about $900,000, but decided to pay federal taxes (which amounted to a few million) later.

Seems that he forgot to do that and as March 2013 rolled around, the IRS caught up with Yang, imposing a federal tax lien of $571,894 on his belongings for failing to pay his federal taxes. Yang’s WSOP Main Event bracelet and other possessions were auctioned off. In an interview, Yang later admitted that he had financial problems due to the 2008 collapse and was unable to pay his taxes, which resulted in fines being accumulated. 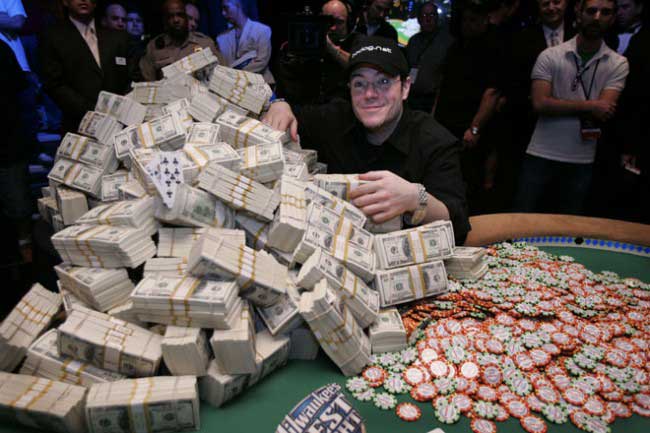 When you promise someone half of your WSOP Main Event winnings, you are probably not expecting to get far in the tournament. Unfortunately for Jamie Gold, that’s exactly what he did before winning the biggest first place prize ever.

The verbal agreement to split his Main Event winnings with Bruce Crispin Leyser was made the day before the start of the tournament in exchange for Leyser helping Gold attract celebrities to the Main Event. When Gold finally won the whole thing, he tried to backtrack on the deal, however, Leyser was having none of it and took Gold to court for his half of the winnings.

Six months later, an undisclosed agreement between the two parties was reached, but it is probably safe to say that Gold did not get his way in this lawsuit. It’s unknown how much money Gold actually ended up with after the lawsuit and taxes, but it is very likely that the amount was no more than 33% of the actual first place prize. 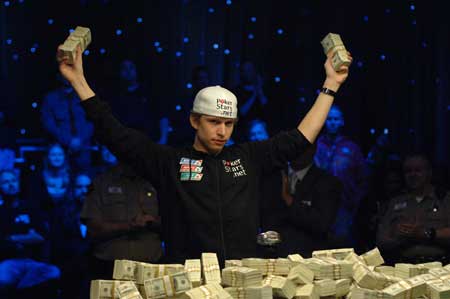 Perhaps the unluckiest of the Main Event winners who didn’t lose his money in some stupid way is Peter Eastgate. Apparently, Denmark is not the best place to be a poker pro, with the tax rate on winnings reaching up to 75%.

Eastgate’s $9.1M in winnings was taxed at a 45% rate on the first $4 million and at 75% for the rest of the winnings, leaving him with just under $2.5 million or 27% of the original first place prize. Even though Eastgate moved to London where poker taxes are non-existent, he was still a Danish citizen at the time and could not avoid taxes. 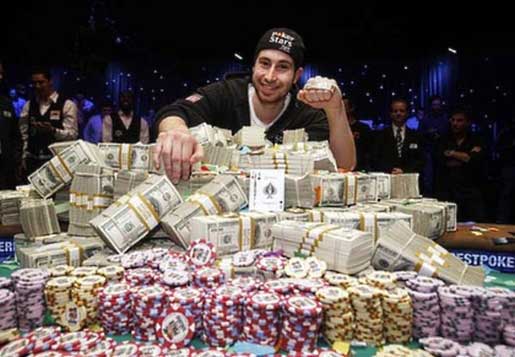 Despite being a Canadian citizen, Jonathan Duhamel could not avoid getting taxed in both the US and Canada. The IRS got to keep more than $2.5 million of Duhamel’s winnings under the US-Canada tax treaty, which sets the tax for gambling winnings at 30%.

When Duhamel got back to Canada, there were still Quebec province taxes waiting for him. Fortunately for him, the amount that was paid to the IRS had an impact on his Canadian tax rate, which saw him pay a total of $1,610,267 more in taxes. Eventually, Duhamel got to keep a whopping 48% of his first place prize. 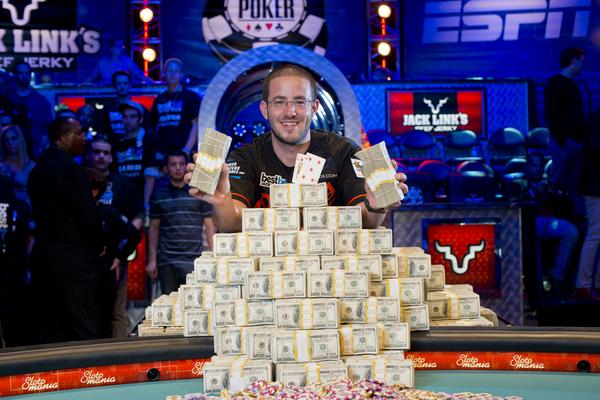 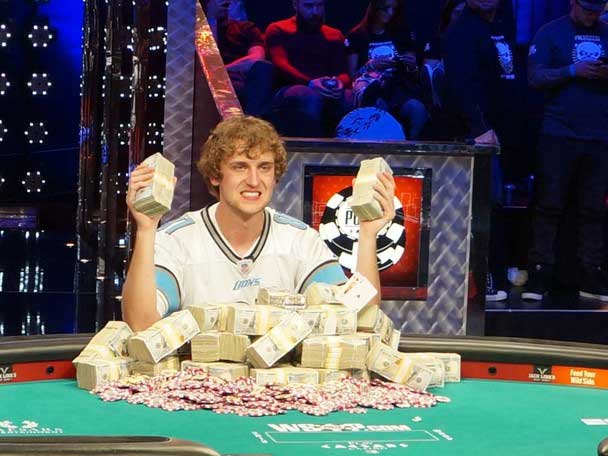 After Greg Merson’s 2012 victory, Ryan ‘The Best Poker Player in the World’ Riess won a similar amount in 2013, but despite not having to pay any state taxes (courtesy of Nevada), Riess was only left with $50,000 more than Merson.

Even though Riess did not have any state taxes to pay, his federal and self-employment taxes amounted to $3,478,818 owed to the IRS. This means that Riess got to keep 58% of his first place prize. 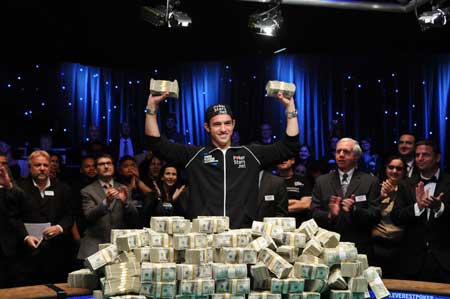 Joe Cada is the youngest Main Event winner and the last person on this list who had to pay any taxes on his first place prize.

Cada resides in Michigan, and even though the state does have an income tax, it is a flat one with a rate of only 4.3%. At this rate, Cada had to pay $371,796 to the state of Michigan, while his federal and self-employment tax bill amounted to $3,184,940. This left Cada with just under $5 million or roughly 58% of his original $8.5 million in winnings. 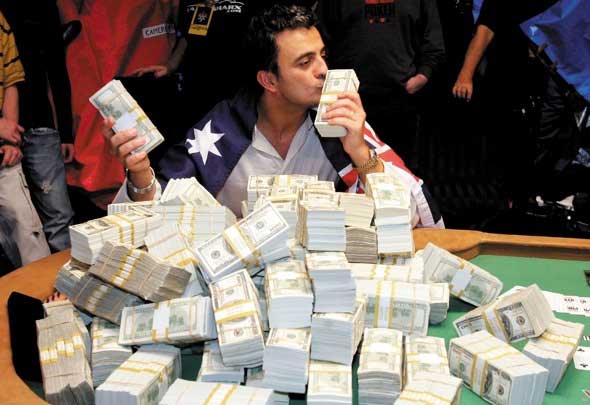 After Joe Hachem won $7.5 million at the Main Event in 2005, he was unsure of whether he would have to pay taxes on the winnings back in Australia. Even though he had moved to the US, he was still subject to Australian tax laws.

Hachem was looking at a possible 40% tax rate paid by professional gamblers in Australia, which would have taken a significant amount of his winnings. However, after some time it was ruled that Hachem did not have to pay any taxes since he did not pursue poker as a career and the winnings were derived from pursuing a hobby which is not subject to taxes under Australian law. 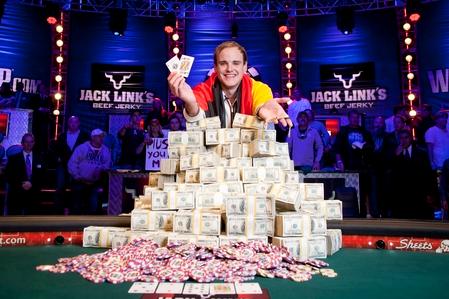 While Jonathan Duhamel had to ship 30% of his winnings to the IRS as a result of the US-Canada tax treaty, Pius Heinz was subject to a tax treaty between the US and Germany, the only difference was that he did not have to pay a penny of taxes under that treaty.

Not only did Heinz avoid any taxes on his winnings in the US, he didn’t have to pay any taxes in Germany either since gambling winnings were tax-exempt there at the time. This left Heinz as the second biggest post-tax Main Event winner of the past decade. 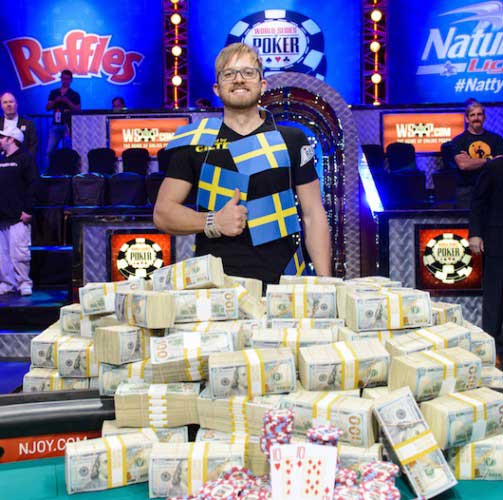 The most recent Main Event winner is also the biggest post-tax winner of the last decade. While originally from Sweden, where he would have had to pay a healthy amount of taxes on his $10 million, Martin Jacobson did not have to pay a penny since he moved to London and was already a resident of the UK.

Jacobson is not the only one taking advantage of the UK’s 0% tax rate on poker winnings. Both Felix Stephensen and Jorryt van Hoof, who finished 2nd and 3rd in this year’s Main Event also moved to London which allowed them to avoid their home countries’ taxes on their multi-million dollar winnings.