PokerStars has once again partnered with another company in an effort to spread the game of poker around the globe. This time, the company is ESPN, the same ESPN that broadcasts the World Series of Poker annually. PokerStars will be providing the sports broadcasting titan with its software for use in the ESPN Poker Club.

The Poker Club is part of ESPN’s extensive poker coverage. Their website covers current events in poker such as live tournaments, poker news, and other various happenings in the poker world. WPT title holder Phil Gordon hosts the The Poker Edge, a radio show dedicated to bringing listeners the latest poker news. Usually, Gordon teams up with Full Tilt Red Pro Andrew Feldman and the duo interviews a special guest. The Inside Deal, presented by PokerStars.net, is similar in nature and provides viewers with video coverage of the latest poker rumblings. It is hosted by Laura Lane, Bernard Lee (13th place 2005 WSOP Main Event), and Feldman.

ESPN’s new poker room is similar to a .net poker room in that players cannot wager real money. Instead, poker enthusiasts can battle it out for play money or enter free qualifiers for a trip to the 2011 PokerStars Caribbean Adventure (PCA). Aficionados can qualify for the Sunday Qualifier four different ways: play 1500 hands, win 10 Sit and Gos, win 1 MTT, or through the Daily Big Play.

The launch of ESPN’s new poker room coincides with their coverage of the Main Event. Tonight, viewers will see the remaining players do battle until the final table is set. A total of nine players, dubbed the November Nine, will make the final table. Next week, on November 6th, the November Nine will resume play. First place is nearly $9 million. Michael Mizrachi, who has cashed in the WSOP 23 times, is the most famous of the group. Mizrachi already owns a WSOP Bracelet, two WPT Titles, and appeared in the second season of High Stakes Poker. He comes into the table 7th in chips. Canadian Jonathan Duhamel is the chip leader.

Interested parties need only a free ESPN Account to download ESPN’s Poker Room. When you’re ready for the real deal, we suggest you create a PokerStars account using the PokerStars Marketing Code flopturnriver. Enter the PokerStars Bonus Code STARS600 when you deposit to receive a 100% Bonus up to $600. In addition to bonus, players who enter the appropriate codes will unlock exclusive invitations to private freerolls and money added tournaments. Each month we give away $1000 in freerolls and tournaments such as the FTRStars500, a $3 tournament with $500 added to the prizepool. 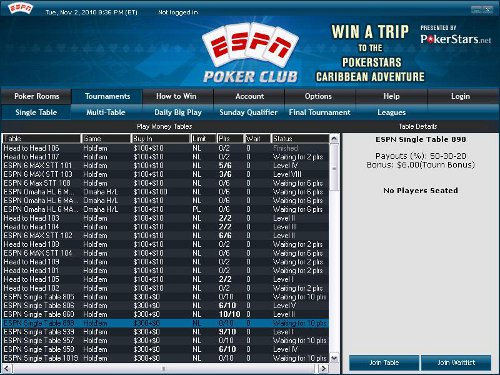