The FTR Gauntlet VII series has now come to a close and there are a lot of moments to look back on.  From nutsinho’s early domination, to GatorJH’s luckboxed pocket tens, even Wildbob’s record-breaking performance, to countless suckouts and aces on the river.  Each season seems to get better, because at the end of Season VI many people said it was “the best season by far,” and that is now being echoed for Season VII.

This series had a different format than past seasons, with 32 total games and a max of 16 that could be played per person.  This allowed for even more games that each member can participate in.  Also, we saw the introduction of heads-up matches, shorthanded games, and Pot-Limit Omaha/8.  Definitely the most popular addition was the 6-max tournaments, which will return next season.

The end of Gauntlet VII was one for the books as it came down to the very last game.  There were three hopefuls who could still claim the title; GatorJH, spin_md, and givememyleg.  The obvious favorite was Gator, as he went into the final game with a 67 point lead on givememyleg, and 50 point lead on spin_md.  It seemed that it would be more of a battle for second place, but either of them could snatch the title with a high finish and early Gator exit.  However, it would not be givememyleg’s night as he finished in 10th place with both Gator and spin still alive.

Down to the final table, all Gator had to do was finish 5th place or better and he was guaranteed the trophy.  But there was light at the end of the tunnel for spin_md, because Gator busted in 8th place when his QQ was taken down by TT.  Now, spin_md would have to take first place and the trophy would be his — talk about pressure!

Spin_md had more to play for than just the special FTR Gauntlet VII forum avatar.  Each season, FTR throws in a lot of extra prizes, and cold hard cash, to the top places: 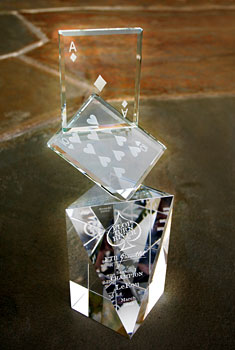 If you haven’t seen the custom-designed crystal Gauntlet trophy you won’t be able to understand its beauty — this thing is amazing!  That alone would be enough to play for, but there was a lot of cash on the line. On top of the prizes, Gator and spin_md were also involved in a side bet which awarded $350 to first place. That is $650 worth of pressure!

Spin did not go down easy and kept battling his way until they were down to 3 players.  He found himself on the short stack so he needed to do something to have a chance at the win.  Eventually, his luck would run out and he finished in 3rd place, which meant GatorJH was the Gauntlet VII Champion!

GatorJH had a very impressive run this year, eventually winning the title by just 22 points.  Out of the 16 games he played, he made the final table 13 times with 2 wins, 1 runner up finish, 1 third place and 2 fourth place finishes.  His tournament winnings ended up being $384.50, with an additional $300 for winning the season, and $350 for winning the side bet, for a total of $1,034.50!  Congratulations to GatorJH, spin_md and givememyleg for their top 3 finishes!

Let’s have a look at the final leaderboard standings for the season:

All of these players, and every player who has finished in the top 10 of the past seasons, qualify for the FyrFytr Tournament Of Champions.  The TOC is a special invitational tournament that takes place at PokerStars after each season for these elite players. This season’s TOC VII will be held this Sunday, 21 September 2008, at 3:00pm ET. All qualifying players will receive an email with the password for the TOC, so if you’ve ever finished in the top 10 of any season of the Gauntlet, be sure to update your forum Profile with your current email address!

We at FTR thank all of the players for participating in FTR Gauntlet VII!  We hope everyone had a great time and enjoyed the series as much as we enjoyed hosting it.  Remember to join us for the next season, Gauntlet VIII, which will be coming around before you know it.  Watch our newsletter and the FTR Gauntlet forum for updates. Every FTR member is welcome to play!