Another FTOPS series has come to an end with millions of dollars awarded in prizes as usual, but if you feel the need for more action, Full Tilt Poker is bringing you FTOPS’s little brother – MiniFTOPS.

The size of your starting stack in the Satellite Hero Freeroll depends on the number of tournaments you satellite into and cash in during the qualifying period:

Win the Satellite Hero Freeroll for the chance to play against the one and only – Gus Hansen. Defeat Gus and win a prize package of MiniFTOPS XXIII tickets worth over $1,200!

Taking place on Sunday at 11:00 ET and with only a $2.20 buy-in, the Big Little Tournament is your chance to turn a small buy-in into a huge payday.

The Big Little Tournament has a Multi-Entry format, so you will have up to 4 chances to hit it big in this one. As you may know, Multi-Entry Tournaments are exclusive to Full Tilt Poker and they allow you to multi-table a single tournament.

Satellites to the tournament are available for as little as $0.22 or 3 Full Tilt Points.

This gives you the following:

With a $2.20 MTT ticket already in your pocket you can basically take a shot at the huge prize pool for free, so don’t miss out on this great opportunity!

Take part in “Game of the Week” promotion to earn double Full Tilt points and compete for huge prizes while trying out a variety of games available at Full Tilt Poker!

The current Game of the Week is Irish Poker. 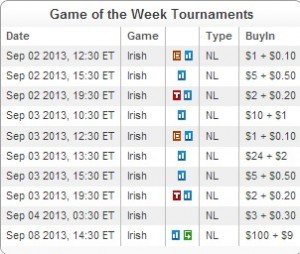