1. Another MiniFTOPS is in the books!

The next FTOPS series is right around the corner and Full Tilt Poker will continue to run satellites to give players of all levels access to the best games on the internet!

Starting on Sunday, October 13th, the Micro Turbo Online Poker Series features 75 tournaments with buy-ins starting from as little as $0.55 or 100 Full Tilt Points. You can also use your FTPs to buy MTOPS tickets directly from the Full Tilt Store, or satellite your way in now for as little as $0.11 or 5 FTPs!

In addition to each tournament’s prize pool, each MTOPS event will award extra prizes including cash bonuses up to $500, MiniFTOPS XXIV Main Event tournament tickets and exclusive MTOPS merchandise!

Running from Friday, September 27th through Sunday, October 6th, 2013 play at least two standard ring game tables at the same time or any Rush Poker table to receive double the Full Tilt Points. Play as often as you can during Take 2 and you’ll also get rewarded with up to $10 in cash.

The more you play during Take 2, the more you’ll earn:

Take part in “Game of the Week” promotion to earn double Full Tilt points and compete for huge prizes while trying out a variety of games available at Full Tilt Poker!

The current Game of the Week is PL Hold ’em. 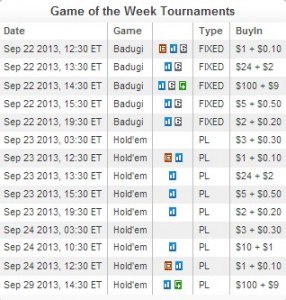