Is Gus Hansen a Degen? 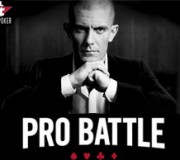 Gus Hansen is not having the best of times at the poker tables these days. The multiple WPT winner has never had the best of runs on the online felt, but recently it seems he has started to spiral, leading many to ask, “Is Gus Hansen a degen?”

As of the end of the 4th of November 2013, Gus had lifetime online losses of $13,908,337. About $3.21m of these losses were before Full Tilt changed hands, but the lion’s share of the losses have been since Full Tilt re-launched with Gus part of the three man “Professional” Full Tilt Poker sponsored team.

I talked to Hansen back in March of 2013 at the Season 9 London stop of the PokerStars European Poker Tour. We discussed his losses, and why he thought he was on a downward trend with his online results.

As you can see, Gus seemed aware that he wasn’t optimising his chances at the table, but based on what’s happened since, I have to think not much has changed.

He claimed to be “rusty” but considering he’s been playing online consistently all year, that can’t be an ongoing factor in his losses. He’s had more than enough time to knock the rust off his game, so there must be other factors impacting his inability to win in any consistent manner. Maybe he’s not giving the games his full concentration, in his words “being Sloppy…” and playing while watching TV, or maybe he’s a little “lazy” and not working to improve his game. Back in 2002 he was one of the best players on the circuit, but the game has advanced a long way from those heady pre-Moneymaker days. If Gus hasn’t kept up to date with the cutting edge theories in the games he’s playing, while his competition has, it puts him at a massive disadvantage, and would significantly impact his winning potential. 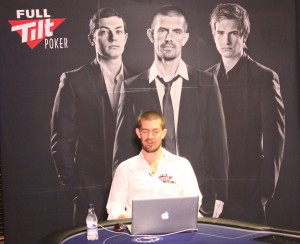 Hansen also talked about his game selection. Gus consistently seeks out the best players online, and proceeds to sit at tables that maybe 3 players in the world could expect to break even at in the long term, let alone be a consistent winner. Sitting at these table, he then seems to be support several professional poker players around the world including “SallyWoo,” Alexander “PostflopAction” Kostritsyn, and fellow Full Tilt “Professional” Viktor Blom. Gus even seemed to know he was outclassed in some of his matchups, saying Alex “Alexonmoon” Luneau was the best 2-7TD player, while “SallyWoo” was the best FLO8 player. Thing is, he has kept playing them. Alex may not have been online in months, but he left the high stakes games with a big chunk of Gus’s bankroll. SallyWoo has also been a regular in the line to pick Hansen’s pocket.

So we have to ask ourselves, why does Gus keep doing this? It seems he’s outclassed at the elite end of the current online cash games, and has lost more than one fortune in playing them. His sponsorship deal with Full Tilt isn’t going to be enough to cover these losses, in fact I doubt it even scratches the surface. Hansen has some small live victories in the past 12 months, but these are equivalent to a very small drop in the ocean. We don’t know about Gus’s other income, including what he may have won playing live cash and Open Face Chinese Poker. Regardless of the other potential income sources Gus may have, it doesn’t change the fact Hansen seems to haemorrhage his bankroll every time he logs into Full Tilt.

I have to consider why Gus keeps doing this. He may have a requirement in his Full Tilt contract to play certain games, but what ever the penalty might be to break the terms of his contract can’t be worse than the losses he seems to encounter every month.

The question about Gus’s motives always seem to return to the statement “Is Gus Hansen a Degen?”

What do you think?