The action from Thursday had left the €2,200 No Limit Hold’em Event #5 had left the field down to just seven players. Heading up this pack was Erik Seidel, who had nearly twice the stack of his next nearest rival. It looked like the Poker Legend was a strong favourite to take down another bracelet for his collection, and he managed to get to heads up with a 2 to 1 chip lead. that was as far as it went as “Big Roger” Hairabedian was the one to emerge victorious, picking up a record second WSOPE title.

The first elimination of the final day was in unlucky hand 13. With the blinds at 4k/8k with a 1k ante, Seidel opened the action from the button with a min raise to 16k. Max Greenwood in the big blind saw this as his spot, and pushed all in for 122,000. Seidel made the call to put Greenwoods chances of the title at risk. Greenwood held K

and was needing to hit against Seidel’s A

. The community cards we dealt, and left a board of Jh4

staring up at a now defeated Greenwood. He left the table with the comment “One of these days!” as he went off to pick up his €22,258 for 7th place.

The next bustout was only two hands later, and again involved Seidel. He min raised again, this time from the cutoff and Mike Watson shoved his stack from the small blind. Seidel called almost instantly, and the two hands were flipped over. Watson held A

and was flipping against Seidel’s 7

. The board changed nothing, and Watson ended his hopes of this title in 6th place for €28,683.

It took another 14 hands for another player to go bust, and the hand started when Erwann Pecheux open shoved his short stack from the hijack, only to see Roger Hairabedian snap call from the big blind. Pecheux probably though he was in good shape with J

, but his opponent was ahead with Q

Hand #56 was the next time we saw a bustout. “Big Roger” opened to 30,000 with the blinds at 6k/12k and a 2k ante, and got a customer in Matan Krakow, who shoved for 139,000 from the small blind. Hairabedian went into the tank for the nest part of a minute before he decided to make the call. Krakow was in front with his 7

but “Big Roger” wasn’t that far behind with A

The board ran out 9

to end Krakow’s dreams of picking up this bracelet event, but he did pick up €49,784 for his efforts.

Kevin Song was eliminated by nothing more than a cold deck. He opened to 35k from the button, only to be three bet by Seidel on the small blind. Song shoved after “Big Roger” had made the fold, and Seidel almost beat him to get his chips into the pot.

but was crushed by Seidel’s Q 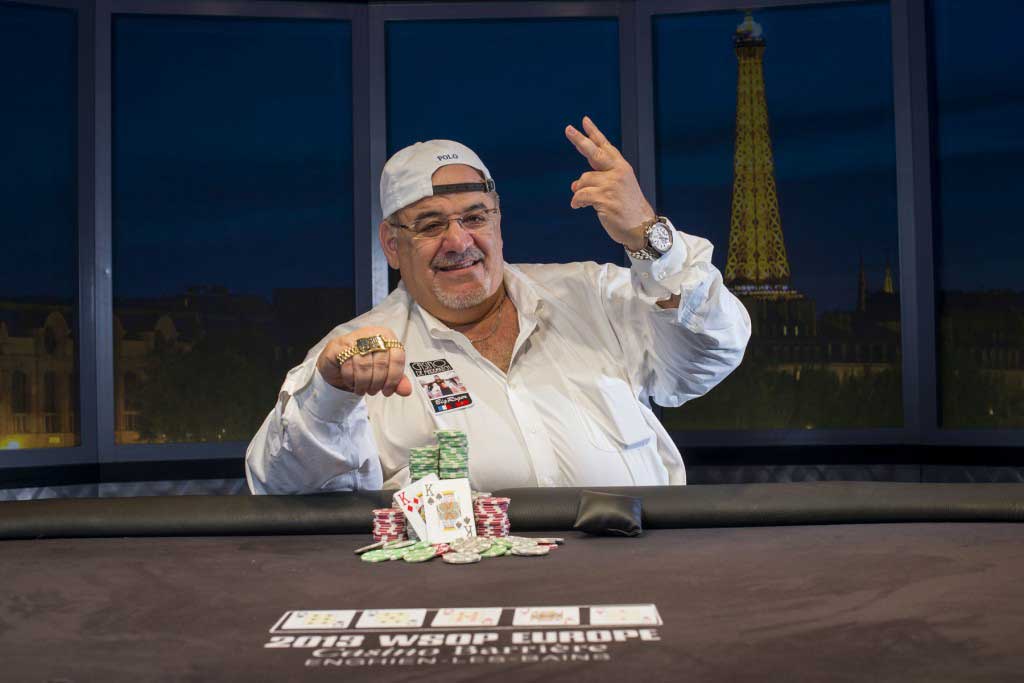 Hairabedian started chipping away at Seidel’s lead, and really took control in hand #104. Erik opened with a min raise to 40k and Roger called to bring the A

flop. Roger checked in flow to allow Seidel continue betting, this time for 50,000. Roger called, and the turn was flipped over to show the 7

. This time the Frenchman was the aggressor, and fired out 60,000, which Seidel called. The river was the K

, and again Hairabedian bet, adding 100,000 to the pot. Seidel rechecked his cards before taking his time to make the call. “Big Roger” turned over T

for the turned flush. Seidel was down to about 500,00 while Hairabedian’s stack was up to around the 1.5 million mark.

It still took until hand #145 to determine the champion. The blinds had got as far as 12k/24k-4k and Hairabedian opened his button with a large bet to 72,000. Seidel three bet to 174,000 and Roger pushed the rest of his stack over the line. Seidel’s soon followed and the American saw he was in trouble as Hairabedian’s K

was miles ahead of his 8

The community cards were dealt out, and at the end, the board was showing 6

, which wasn’t enough to save Seidel’s dream of another bracelet.

The results from the final seven were: