Ian Simpson Wins Irish Open, and gets Wife as an Extra Prize! 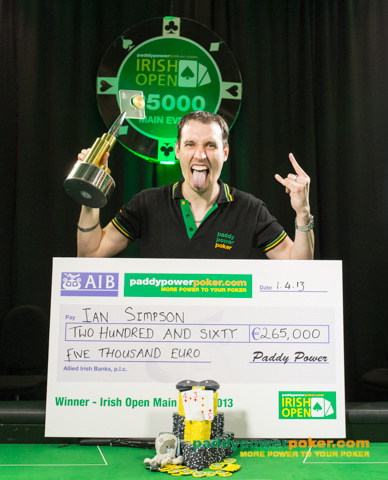 Ian Simpson took the title yesterday, beating the other 504 players at the €2,000+€250 event held in Dublin over the Easter Weekend. His reward for first place was a very tasty €265,000 for first place, to go with the Title and Trophy.

In the future, it’s doubtful he’ll remember April the 2nd for winning the Irish Open. While winning the Open is going to be a highlight of his life, it’s likely to be overshadowed by what happened after the final hand had been dealt.

With all the chips sitting in front of him, Ian got on one knee and proposed to his girlfriend, Emma, who had been railing him all weekend. She said yes to his offer of marriage, and was proud to wear the diamond ring he had brought for the occasion.

The science teacher, from Cramlington in Northumberland, said after all the commotion had died down:

“Its the most amazing experience of my life. I’m completely overwhelmed by the support and love from all my friends and family, not to mention the kids at BCHS who stayed up late and cheered me on, it really meant the world to me!

“Winning a tournament of this scale is life changing. Winning Emma’s hand in marriage even more so. For the stars to align to allow both things to happen simultaneously is simply perfect.

“For anyone wondering, the proposal was coming regardless of how it ended. If I busted in 8th on a stupid bluff or my AA got cracked I was shaking everyone’s hand and getting down on one knee.” 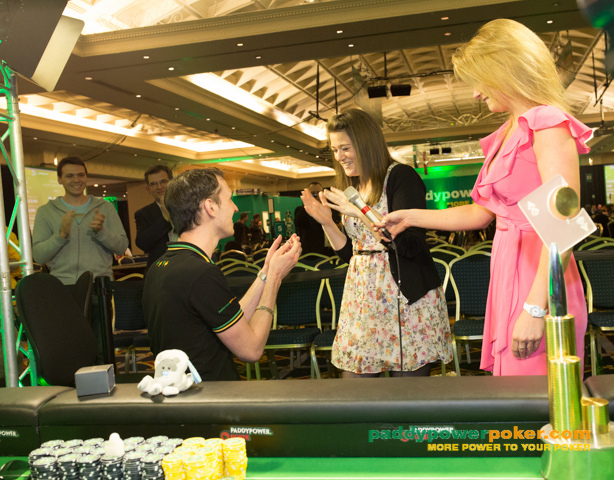 The final table had several people who had been there before. Namir Mohamed had previously finished 8th back in 2004, and Declan Connolly had placed 7th in 2010, and Tom Brady won last years International Poker Open, making this a tough final table.

The final results from the Final Table are:

Pictures taken by Danny Maxwell and courtesy of the PaddyPower blog.