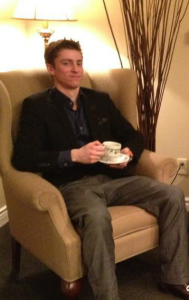 Ryan “Micro2Marco” McEathron was the eventual winner of the $4,000 WSOP prize package promotion that was held for FTR members at William Hill earlier this month. He will be heading out to Las Vegas in early July to compete in the $1,500 WSOP Event #60 and hopefully will bring in another bracelet to the FTR forum!

M2M has been playing poker for years and is a current moderator of the Beginner’s Circle in the FTR forum. He signed up in January of 2009 and has over 5,000 posts across the forum. If you’re looking for some advice on general concepts or on a hand you played, you should register for the forum (it’s free) and ask away in the BC. Our moderators and members are ready and willing to give you advice.

Congratulations to M2M, we’re glad the package was won by a dedicated FTR member, and someone who has a chance at a big score! Stay tuned to the forum for an official rail thread as we follow M2M when he arrives in Vegas.

FTR was able to do a quick interview with M2M, to talk about his history playing poker and his upcoming trip to Vegas for the WSOP.

How did you get started in poker?

I got started playing micro stakes after messing around with play money for awhile.

What games do you regularly play now?

I play NLHE cash games, both cap and standard tables (which I will play with various stack sizes).

What lead to you signing up at FTR?

After a lot of lurking on forums but not really improving too much I decided I wanted to really get serious about poker, so then took the plunge and signed up.

What was the single biggest benefit you can think of to becoming a better and consistent winning poker player?

I guess there are many but nothing really stands out at the moment. Answer fail.

Being mod of the Beginner’s Circle you must see a lot of bad plays and mistakes over and over. What are some of the more common mistakes you see new players make?

Some common ones are not value betting thin enough (on turn especially) and picking shitty hands to 3bet bluff preflop. The biggest core mistake would be not asking enough ‘what if’ questions when posting hands (basically just looking for spoon feeding as opposed to solving things themselves). If the latter is taken care of the former will likely follow.

Take us through your tournament win at William Hill. I know the field wasn’t large but how did you plan to play with it being basically a winner take all event?

I try not to over think too much when playing satellites/tourneys with a big prize so really just staying focused and adjusting my play as I see fit was the plan. I did expect the field to be relatively soft compared to my normal grind, so with that in mind I had some guesses as to what to look for when exploiting my opponents. Luckily ran really hot early, and once you run up a stack in these things you can just run the table so running well in the right spots helped a lot. By the time it was heads up second only had around 8bb. If I recall correctly, it was game over by my KQ holding vs QJ all in pre.

Have you ever been to Vegas before or played in the WSOP?

This will be my first time in Vegas. To be honest I wasn’t all that excited at first but that changed once I officially booked my flight. Now I can’t wait to go. You guys can follow my blog for an upcoming trip report at ryanmceathron.com. And now that my real name has been exposed… Inb4 forum stalker.

What are you doing, if anything, to prepare for a large scale live tournament rather than playing online?

I’ve started studying MTTs a bit closer and have been playing online cash games with various stack sizes. Also plan on playing a few small live tournaments to focus on some specific aspects of live play: keeping posture/betting speed/placement of chips and so on consistent so I don’t give much away in terms of tells, that sort of thing. Counting the pot is another one too. We online players are spoiled by having the pot size written out for us. As some of you from the forum know, I could use a little practice with that one.

What advice would you give to someone who is just starting to play poker today?

Decide what it is you want out of poker and then do everything you can to make that vision turn into reality. Stay on course, and build a network of players you can discuss poker with – this is probably the most important to help keep you on track.

This WSOP package was played at William Hill Poker, one of the premiere online poker sites in Europe & Canada. William Hill resides on the iPoker network and offers all new players a 200% deposit bonus up to $2,000 (€1,400/£1,250) on their first deposit. If you’re looking for more information on William Hill, you can read our review.