Local Reading financial advisor James Martin has emerged victorious in the main event of the Reading leg of the Grosvenor UK Poker Tour, winning £22,640 and a £2,125 seat to the Grand Final in London later this year. The Main Event, a £500 + £50 tournament with a £50,000 guaranteed prize pool, capped off a week of exciting poker action held at the Grosvenor G Casino in Reading.

The final table started Sunday after two days of play, which saw a starting field of 165 players narrowed down to just 9. The remaining competitors and their stacks were:

Nobody was eliminated for the first hour and a half of play, but then James Martin got the action going by getting all in against Paul Dunne with pocket tens against Dunne’s pocket eights. Dunne was eliminated in 9th place, earning £1,650.

Timotheos Timotheou then dispatched David Lloyd. “Tim Tim” got his AQ in preflop against Lloyd’s pocket tens, and won the flip when the board gave him trips. David Lloyd was sent packing in 8th place, with £2,270 in winnings.

John Burberry made a move with his short stack while holding AJ against Alex Zeligman’s A6. But his dominating hand failed to hold up, and Burberry had to leave in 7th place with £3,090.

Alex Zeligman’s luck ran out though, as his QQ failed to hold up against Adam Howlett’s KJ. Alex was left crippled and got the rest of his stack in against Jeff Kimber. Unfortunately for Alex, his AT was no match for Kimber’s KK. Alex Zeligman was eliminated in 6th place, taking home £3,920.

Tim Tim got involved in some all-in spots, but they proved to be disadvantageous for the chip leader. After Jeff Kimber and James Martin both doubled through him, the final blow was delivered by math teacher Ellie Biessek, whose pocket kings were a healthy 72% favorite over Tim Tim’s A6. He received £4,950 for his 5th place finish.

Adam “Buzz” Howlett was the next to leave, his A9 losing a flip against Jeff Kimber’s pocket 66. Howlett received a prize of £6,390 and was eliminated in 4th place.

Three-handed action was wild and swingy, with the chiplead changing a few times. Ellie Biessek was fortunate enough to get all the chips in the middle with J8 on a JT6 board, for top pair. James Martin revealed T8 for middle pair. The turn came up a ten, though, and Ellie Biessek was knocked out in 3th place, with £10,520.

Heads-up action saw 27-year-old James Martin square off against Grosvernor Poker sponsored pro Jeff Kimber. The two decided to make a deal, receiving £18,000 each and playing on for the balance of the prize pool, the trophy and the Grand Final seat. It is just as well that they decided upon the deal then and there, as there would not be a further chance to make a deal during the single hand of heads-up play. 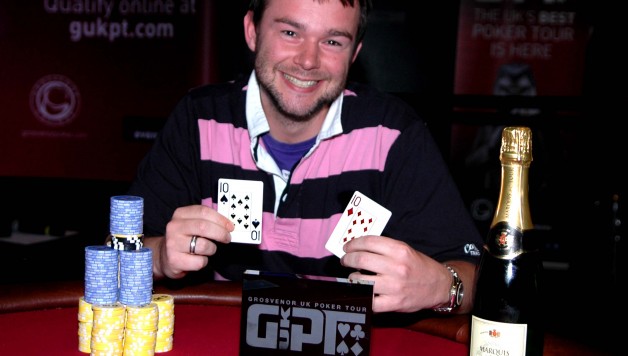 James considered how he would spend his prize money: “I promised if I won I’d take my girlfriend to the Caribbean, but I’m thinking I might take her to Brighton for the GUKPT instead.” The soon-to-be-single James Martin has locked up his seat in the £400,000 guaranteed Grand Final tournament, which will begin in London at the Grosvenor Victoria Casino on November 21.