Jeremy Ausmus prevailed in Paris Thursday at event #4 of the 2013 World Series of Poker Europe, taking home €70,324. This €1,650 buyin PLO event saw 184 entrants, but by the third day of play, there were only six players remaining.

The final table had some familiar names, including two-time bracelet winner Jason Mercier and Finnish player Juha Helppi. Helppi entered the day as the chip leader and was undoubtedly looking to add a WSOP first-place finish to his resume, which already contained second, third and fourth place WSOP results. 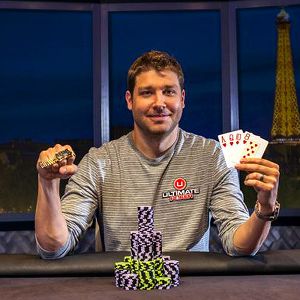 The chip stacks at the beginning of play Thursday were:

Shortstack Schwartz had an uphill battle, and alas, he was the first one to fall. After raising preflop, he and Jeremy Ausmus saw a flop of T

. Ausmus led out, and Michael shoved over for his few remaining chips. Ausmus made call call and showed T

for top two pair. Schwartz showed the A

for a pair of aces. The turn was the 5

, giving him a gutshot and flush draw to go with his overpair, but the 9

The elimination of Schwartz left PokerStars pro Jason Mercier as the new shortstack. But he did not go out without a fight. Through aggressive play, he managed to double his starting stack. This left Martin Kozlov as the player with the fewest chips, and he was not as fortunate. Martin got involved in a three-way pot with Juha Helppi and Jan-Peter Jachtmann on a 4

flop. Perhaps feeling some pressure to make a move, Kozlov raised over Helppi’s c-bet and then called off the rest of his chips when Helppi moved in. Their hands were shown:

Kozlov had merely a double gutshot and two back door flush draws, while Helppi held top pair, top kicker. The 3

Jason Mercier could not avoid his fate indefinitely. He three-bet Helppi’s open and both players saw a flop of
Q

. Mercier c-bet the rest of his chips, and Helppi called. Helppi had the K

for top pair and a flush draw, while Mercier had the A

for an overpair. Mercier was a slight favorite, with about 54% equity, but the K

turn gave Juha Helppi a flush. Mercier needed an ace or deuce on the river to boat up and defeat Helppi, but he was disappointed as the irrelevant T

came instead. Jason Mercier was booted out in 4th place with €23,036 in winnings.

This left Juha Helppi as the huge chip leader with three players remaining. Jeremy Ausmus, on the other hand, was the shortstack and indeed veered close to elimination on several occasions. However, he was able to double through both Helppi and German player Jan-Peter Jachtmann to stay alive and increase his stack.

It was Jachtmann who wound up falling next, when he got his A

. Helppi’s top two pair held up to win the pot, knocking Jan-Peter Jachtmann out in 3rd place with €31,367.

Heads-up competition saw Ausmus start with a 2:1 chip disadvantage, and he was quickly all-in preflop for his tournament life with K

flop gave Juha Helppi top pair, but Jeremy had the nut flush draw. This draw completed on the 7

turn, and the river was irrelevant. Jeremy Ausmus lived to continue fighting.

flop and getting all the chips in against Helppi’s A

nut flush draw. The board was no help to Juha Helppi, and Ausmus had erased his chip deficit.

The two players then began an exhausting grind for over an hour. They traded chips back and forth, with neither one able to gather any momentum. Finally, with the chip stacks still about even, Juha Helppi limped the button and Jeremy Ausmus checked his option. The T

flop looked innocuous, yet it unleashed a flurry of action. Ausmus led out, Helppi raised, Ausmus three-bet, and then Helppi four-bet all-in. Jeremy made the call. Both players showed what they had:

Each of them held trip tens with an ace kicker, but Ausmus’ queen kicker and flush draw gave him a significant advantage. The turn came 8

, filling Jeremy Ausmus’ boat, and the 3

Jeremy Ausmus, who had achieved distinction with a fifth place showing at the 2012 WSOP Main Event, finally earned himself a WSOP bracelet. The €70,324 prize should also serve as a sufficient recompense for his grueling heads-up match against Juha Helppi.

The complete final table payouts were: