At the Tournament of Champions, competition starts before the first hand is dealt.

In order to qualify for this event, a $1 Million freeroll reserved for WSOP champions, you need votes. 20 players out of 27 are chosen by an online contest where fans vote for their favorite players to compete. Marty Smyth is not one of the biggest names in poker, but he hopes to win his spot with a promise: if he is voted into the competition, he will give all the money he wins to charity.

Smyth, a player from Belfast, Northern Ireland, has lots of reasons to feel charitable. In 2007, he won the Irish Poker Open. In 2008, he won the Poker Million and the Pot Limit Omaha World Championship. This week, he is getting married. After such a successful career, Smyth wants a chance to play in this prestigious event, and has vowed to show his gratitude by giving away his winnings. If he wins, the money will go to kids at the Royal Belfast Hospital for Sick Children and Our Lady’s Children’s Hospital in Dublin.

His sponsor, Boyle Poker, calls Smyth’s record “the pedigree of a true champ.” However, he will face his toughest competition ever if he makes it to the tournament. The biggest names in poker and the past seven TOC winners will all compete against him. As a lesser known player, even qualifying for the event will be a challenge. Normally, he would not have a chance to play, but Smyth hopes voters will rally behind his cause and grant him a spot.

The TOC is a classy tournament that has benefited charity before. In 2006, Mike Sexton gave half of his $1 Million prize to charity. Sexton, who created the event in 1999, required people to be voted in to play because he wanted it to be like the Tournament of Champions in PGA golf, “where you couldn’t just buy your way in.” Before he played in 2006, he promised to donate half his winnings. He was an underdog as well, but amazed the field by coming in first.

With his entire winnings on the line, Smyth hopes to do the same. But in order to play, he needs votes. This is the first TOC in four years, so the competition to play is high. If you want to support his candidacy, you can vote at the WSOP official site by clicking here. 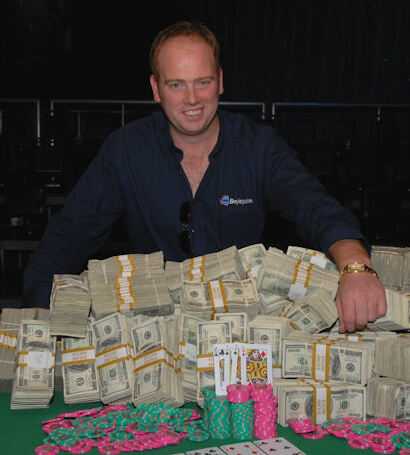