The WSOP, like always, has a nice variety of events for poker players to choose from. One of these is that playing in the usual No-Limit structure, except players would sit at tables with a maximum of six total players. This seems to draw a lot of interest mainly from the online players. A lot of online players attending the WSOP play in regular 6-max cash games so it seems only natural they would want to attend.

What makes this tournament and structure so unique is that players have to play more aggressive than at 9-handed tables. This means A LOT of bluffing! As a spectator, this is always fun to watch. As a player, you better have a good grasp or you could easily be too aggressive.

The leaderboard had some very good and famous players on there at the end of day 1. Matthew Jarvis led the charge, who finished in 8th place in last year’s WSOP Main Event. In 5th place was the ever so famous Daniel Negreanu. Overall, 174 players remained at the end of the day, including David Gent with a whopping 1 single chip to his name.

At the end of Day 2, there was a new sheriff in town. Justin Filtz owned the lead having almost twice as much as second place. Also on the leaderboard was 2010 Main Event champion Jonathan Duhamel.

Day 3 was very scary and nerve wrecking for players. At the end of this day, only two players would remain who would fight it out for a bracelet and the large first place prize. It was only fitting that the prior end of the day leaders were the only two left standing. After three hours of battle, the play decided to resume on Day 4. This time Matt Jarvis owned a 8,645,000 chip lead over Justin Filtz who had 2,345,000 chips himself.

Day 4, the final day, would be over in a hurry. On the fourth hand, Jarvis won even more chips when he caught Filtz bluffing. It would be all over on the very next hand. Filtz quickly announced all-in after looking at his cards on the button. Jarvis just as quickly called him holding A8 to Filtz’s K9s. The board ran out 5h3h6d2s3d giving Jarvis the victory!
Amazingly it only took five minutes on Day 4. 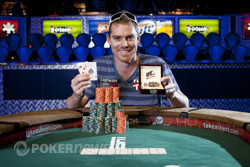 Congrats to all of the players who finished in the money especially Matt Jarvis who was able to take home a bracelet.