Matt Stout, Achiever and Dreamer, Our Next AMA Guest 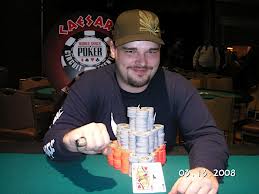 Matt Stout is a highly talented and successful poker player, widely popular with fans, media, and players alike. He is definitely a player on the rise: steadily increasing his footprint by amassing tournament cashes from year to year he is currently one of the hottest players around as, in 2013, he is enjoying his most profitable year yet.
Matt was an aspiring pro hockey player in the mid-2000s dreaming of becoming a New York Ranger one day. His early years’ successes on the high school varsity team – even becoming the New Jersey state champion one year – instilled high hopes of this being a worthy pursuit. At the same time, his online poker hobby started to materialize into a rewarding pastime, and the immediate payoffs that it brought eventually tipped the scale towards making poker his career choice.
From 2006 to 2011, Matt grinded online MTTs on PokerStars and Full Tilt scoring multiple notable wins for a total of nearly $2 million in winnings and earning the “3 Million in Lifetime Cashes” accolade from Pocketfives. After the events of Black Friday he relocated to Costa Rica to continue with his online poker career but, at the same time, decided to switch the emphasis to live tournaments.
Since then, he’s notched numerous live cashes – around fifty and counting  – totaling over $1 million. His live winnings, however, are only a part of his immense poker presence. Matt’s gregarious personality is the other part, making him such a welcome addition to any tournament or poker telecast.
His poker dream, which he also has every intention of making a reality, is to start the Charity Poker Tour that will hold tournaments at the WSOP and WPT stops to benefit charities worldwide. Matt has aligned himself with people from charity circles to brainstorm ideas but meanwhile, he is answering his philanthropic urge by volunteering for Habitat for Humanity and Three Square food bank.
To get to know Matt Stout a little bit better you can visit his blog at stoutpoker.com, where you can also inquire about getting private lessons from him.
It is our pleasure to host this fascinating individual for an AMA session on Monday, September 30th at 7 pm ET. Follow this link  to ask him anything!