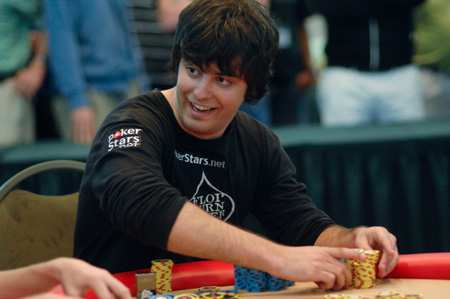 FTR veteran Max “Massimo” Steinberg flew down with fellow FTR member, and twin brother, Danny “IowaSkinsFan” Steinberg to buy-in straight up for the LAPT in San Jose, Costa Rica. They are both very capable of taking down a tournament like this, and went with high hopes. That might be why no one is shocked to see Max as the chip leader with three left at the final table!

The $2500 event started with 398 players making the prize pool $965,150. 32 players eventually placed in the money, and Max coasted the whole way to the final table. Max said on an interview prior to the final table, “Basically, first table I was playing very aggressive because there was a lot of passive play and I started building up chips without really showing down anything. I eventually got to a point where I got all-in, first all-in of the tournament, I had 88 against AK and I won.” Who knew that the one coin flip where he would be all-in would set him up to make the final 9!

Later, Max got all his chips in with AA against the AKs of Joe Ebanks and doubled up, bringing his stack to 2nd in chips! Players kept dropping and Max kept adding to his stack, and then a huge hand happened. By this time the blinds had hit 10,000/20,000/2,000 and 5 players remained. Alec Torelli raised to 45,000 and Max re-raised to 150,000. Alec eventually shoved all-in and Max instacalled showing AA! Alec tabled 33 and the final cards of 7QJK9 did nothing for him, giving Max the dominant chip lead with 4 to go!

Shortly after, another player fell, this time Alexander Soderland when he moved all-in with Q2 and was called by Valdemar Kwaysser with AK. Soderland earned $77,212 for 4th place.

We are now at 3 way action, and Max Steinberg is the chip leader! Here are the chip counts:

5:15 PM – We are now heads up! Steven Silverman has a sick run of cards, and is done in 3rd place. Silverman was on the button and raised, to which Valdemar Kwaysser re-raised out of the small blind. When it got back to Silverman, he put in the 4th bet, up to 175,000, and Kwaysser moved all-in. Silverman called instantly and flipped up KK which was in great shape against the Ts5s of Kwaysser. He was hoping Silverman was just on a bluff, but alas now was all-in for his tournament life. The flop of As8d9d showed little help for Kwaysser, but the 2s on the turn gave him a flush draw. When the river fell the 7s, Kwaysser jumped out of his seat and gave a sick sick beat to Silverman. Just a few hands later, Silverman limped on the button, and Kwaysser raised. Silverman pushed all-in and Kwaysser made a crying call showing 2s2c, which again was behind Silverman’s 5d5h. The flop came 4s8c8s, again offering little help. However when the Js turned, the crowd moaned and went crazy when the Ks fell giving Kwaysser a flush. Silverman finished in 3rd place for $106,167.

Heads up play has begun, and even though Max is down, he is no where near out! He is very experienced at heads up action, and here are the stack sizes:

6:15 PM – Roller coaster start for Max Steinberg. Heads up play started with lots of preflop raises, both players not wanting to see a flop. However, the first few pots went to the chip leader, Valdemar Kwaysser. First off, Max raised preflop and Kwaysser called. On the flop of Ad5d9c, Kwaysser checked/called a 70,000 bet on the flop, and again check/called a 140,000 bet on the 2c turn. The river fell the 2d and both players checked, Max showed QQ but Kwaysser held A8 and took a 600,000 chip pot.

A few hands later, there was a raise, all-in and call, with Max Steinberg showing KJ and Valdemar Kwaysser AT. The flop was no help, but the K on the turn and a blank river sealed it for Max, giving him a nice double up. The were again close to the start of the match, Kwaysser with 2,800,000 to the 1,200,000 of Steinberg.

Max Steinberg won a few small pots, and had around 700,000. On the next hand, the players saw a flop of 9h8s8c. Max bet and was raised by Kwaysser, to which Max re-raised and Kwaysser shoved all-in. Max called and showed J9, but was miles behind Kwaysser with AA. No suckout would come and Valdemar Kwaysser would become the LAPT San Jose, Costa Rica champion taking home $274,103!

Congratulations to Max “Massimo” Steinberg for taking 2nd place and earning $144,773. It’s too bad he couldn’t get the win, but great finish!  Way to represent FTR!