Daniel Negreanu has added a sixth piece of WSOP jewellery to his collection as he picked up another bracelet, winning the 2013 WSOPE High Roller. Not only did he win his sixth bracelet, he also picked up the 2013 WSOP Player of the Year title, the first person to ever have won it twice.

The final table took 203 hands to be resolved, which considering it started with the players having an average of about 47 big blinds was probably longer than most people expected.

The second hand saw Negreanu at risk after he shoved from the button holding Tc9c and was called by Jason Koon with KsQh.

The board ending up showing eights full of sixes, allowing Negreanu to survive with a chopped pot, and who doesn’t like a chopped pot?

Eighth place fell to Erik Seidel when he moved all in during Hand #22 for 12.5 big blinds. Scott Seiver made the call on the button in the next seat, placing Seidel at risk. The cards were flipped over and Seidel had AcJd, which was dominating Seiver’s Ah7d. The board ran out in Seiver’s favour showing 7h9s7sAs4h for the full house. Seidel left the table in eighth place for €55,400.

The next elimination took some time, and it didn’t happen until hand #65. Jason Koon shoved over Negreanu’s open limp for just over 16 big blinds. David Peters called from the blinds, and Negreanu got out of dodge, mucking his cards. The cards were flipped over, and Koon was in trouble as his AhKc was way behind Peter’s AcAd. The QhJd4h flop was spread across the felt, giving Koon a straight draw. The turn and river were both blanks, coming 5c, 8d, and Koon was eliminated in 7th for €63,500.

It took less than 10 hands for the next bustout to happen. Negreanu made a min plus raise, which brought an all in move from Seiver for 415,000. Negreanu was head to say “I have suited cards, I call.” The flop came down showing 7c3s7s, bringing Negreanu’s bantering side out with a “That’s boring!” comment. The turn was also boring as it was the 2d, but the river was anything but boring. The Qs gave Negreanu the pot, and ended the title hopes of Seiver, who left in 6th place for €74,600.

Hand #98 saw the next player to hit the rail. Timothy Adams moved his 206 big blind stack over the line, and Negreanu was priced in to call with any two cards in the big blind. Adams had the better hand with Qc8d against Daniel’s 9h5h. The river was again Negreanu’s friend with a 9d gifting him the pot. Adams busted in 5th for €100,600. 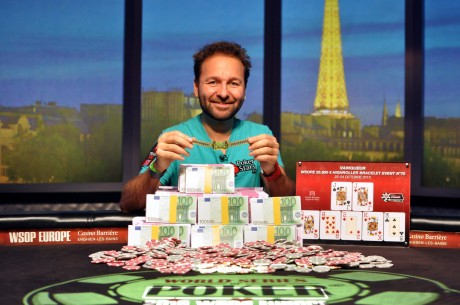 Fourth place was award 30 hands later. Negreanu opened the action with a min raise from the button, followed by a three bet from Villa-Lobos. David Peters four bet shoved from the big blind forcing Negreanu to get out of the hand, while Villa-Lobos snapped off the call. Peters was ahead with the TsTh, but Villa-lobos had nearly half the equity with AsQc. The Qd on the flop was the deciding factor, and ended Peter’s run. He headed to the cage to pick up his €150,500.

The action got the chip stacks of the last three balanced so no-one had any significant chip leads until Phil Gruissem went in 3rd place during Hand #150.

Negreanu opened with a min bet on the button, and Gruissem shoved all in, and Negreanu made the call. Phil was holding Ac4c and Negreanu was dominating with AsJd. The flop held the Jc, and that sealed the German’s fate. He picked up €250,000 for third.

The final hand of the event happened with Negreanu holding a 3:1 chip lead. Villa-Lovbos limped from the button, Negreanu raised to 3x, and the Brazilian shoved. Negreanu snap called, and his JdJs was in control against Villa-Lobos’ 5d5c.

The board was irrelevant, and Villa Lobos picked up €450,000 for his runner up spot. The Brazilian is on fire this year, with a UKIPT title, 2 deep runs in EPT’s and now a second place in a high roller that he satellited into.

Negreanu added his 6th bracelet to his mantelpiece along with €725,000, and the points he earned in the Player of the Year race were more than what he needed for that title as well.

The final payouts were: