After four days of exciting play, the PokerStars Marbella Festival Main Event had a champion Sunday night as Ludovic Geilich came out on top of a field of 763 to capture first place and €130,000. Geilich, hailing from Glasgow, was one of four professional players at the final table.

The tournament had a €1,000 + €100 buyin and a prize pool of €732,480, which was payed out to 88 places. It was held at the Casino Marbella, a top-notch venue known for the quality of its entertainment. The Main Event was the premier event of a week of poker, including such events as a PLO €250 + €25 one rebuy tournament and a €1850 + €150 high-roller competition. PokerStars, the UKIPT and the Estrellas Poker Tour teamed up to hold the Marbella Festival in the picturesque city of Marbella, located in southern Spain. 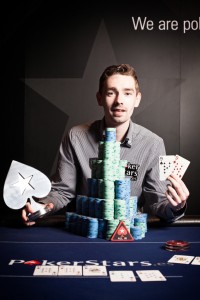 Eight competitors returned after three days of play to constitute the final table. Here’s how the stacks looked at the beginning of play Sunday:

Geilich got a taste of blood early in the day by getting all-in preflop with aces against Fernando Curto Gonzalez’ pocket sixes. Geilich’s aces held, knocking Gonzalez out in 8th place with €12,820. Next, Jorge Eguaras made an ill-advised turn bluff-raise with a gutshot and overcards into Pablo Rojas’ made straight. The river did not help Eguaras, and he was eliminated in 7th place with €17,580 in winnings. In the very next hand, Jonatan Soderstrom open-jammed with K

and Kamil Krabia found a call with A

. Sonderstrom failed to improve and was sent home in 6th place, earning €23,800 for his efforts.

Geilech then got involved in a large pot against Lucas Blanco. Blanco opened preflop, and Geilech called on the button. The Q

flop went c-bet, call, and the turn was dealt: 5

. This innocuous-looking card nevertheless brought big action, as Blanco barreled it, Geilich raised, and Blanco three-bet shipped his remaining stack in. Ludovic Geilich made an instant call, and revealed pocket fives for the turned set. Blanco had the A

for top pair, top kicker. He was drawing dead, and had to leave the tournament, having earned €35,710 for his 5th place finish.

Asier Crespo, his short stack size necessitating bold play, was the next to exit as he shoved A

on the button and got action from Kamil Hrabia, holding pocket queens. The board was no help and Crespo was knocked out in 4th place with a prize of €48,520.

After a few minutes of three-handed play, the remaining competitors (Ludovic Geilich, Kamil Hrabia and Pablo Rojas) started discussing a deal. The stacks at that point were as follows:

There was some playful banter between Geilich and Rojas, as the two players had been chatting throughout the final table and seemed to be striking up a friendship of sorts. The talk went on and on, discussing the various merits and disadvantages of the ICM and chip-chop methods of calculation. The tournament director informed the players that at least €14,000 had to be set aside for the eventual winner, regardless of any deal made. Armed with this information, the contenders continued their discussion and eventually a deal was struck:

After this deal was made, play seemed to loosen up and become aggressive. The next hour saw Hrabia three-barrel with a set of sixes and get value from Geilich, who called all the way. Then, Rojas and Geilich got all in preflop with Rojas’ A

holding up against Geilich’s A

, doubling up the Spaniard.

About 10 minutes later, Hrabia opened the button, and Geilich three bet. Hrabia called, and the players saw a flop of Q

, and Geilich checked. Kamil Hrabia bet, and Geilich made a massive check-raise that would put his adversary all-in. Minutes passed as Hrabia pondered his decision and finally folded. Ludovic Geilich then held aloft his cards: 7

. The rail went crazy. Geilich had just made an all-in turn check-raise bluff with no hand and no draw. Hrabia said, “I had a six,” to which Geilich advised, “You should have checked.”

Now severely crippled, both in terms of stack size and also, perhaps, emotionally, Kamil three-bet all-in against an open-raise by Rojas. Rojas made the call, and both players revealed their hands:

The board ran out with a couple of clubs, but the river was a brick, ending Hrabia’s tournament life. He walked away with the 3rd place deal money, €95,000.

Heads-up play began, the two players trading pots back and forth. There was some light three-betting, and a few postflop moves were made. The action tended to favor Ludovic Geilich, but only slightly. Finally, after over three hours of one-on-one play, the final hand was dealt.

. Dozens of spectators rushed to the table, eager to follow the exciting action. The tournament director, Toby Stone, had to restore order, calling on the staff to remove the overeager fans.

The flop came out: K

. At that point they were still basically flipping, Geilich holding a slim 53% equity edge. Any queen, jack, ace or king would win the pot for Rojas. The crowd went wild again, with many observers yelling loudly for the card that would benefit their favored player. The 3

that arrived on the turn was no help to Rojas, so his tournament boiled down to the river card: 8

. No good for Rojas; all his draws had missed. Rojas busted from heads-up play in 2nd place, with his €98,000 from the three-handed deal.

Ludovic Geilich, amid loud cheers of “LUDO! LUDO! LUDO!” from his friends and fans, had just won €130,000 for his masterful 1st place performance. When asked how he intended to celebrate his victory, Geilich indicated that his voluble friends were, “all going to get smashed,” but he was unclear about his own possible participation in this activity.

The full list of final table payouts for the Marbella Festival Main Event is:

For more information about this exciting tournament, check out the PokerStars Blog.