Every poker player that has ever dreamed of landing a seven-figure payday and becoming a millionaire is in luck, because PokerStars has launched a new promotion, PokerStars Makes Millionaires, that aims to do exactly that.

Throughout its storied history, PokerStars has given birth to more than 150 poker millionaires thanks to a wide variety of online tournaments, live events, and made-for-TV poker competitions, and now they plan on adding to that number. Over an eight-week period from March 27 until May 24, PokerStars newest (and boldest) promotional campaign will make at least five players millionaires.

Team PokerStars Pro Bertrand ‘ElkY’ Grospellier, who made it big with his first seven-figure score at the PokerStars Caribbean Adventure in 2008 when he cashed for $2 million, had this to say about the promotion:

“PokerStars has a long history of hosting online and live events that turn normal players into millionaires. It happened to me at the PCA and there will be several more millionaires created in the next month. New games like Spin & Go’s, where literally anyone who enters has a chance to become a millionaire, is generating excitement amongst the online poker community again.”

The promotion begins with the $1 Million Spin & Go promotion and culminates with the Spring Championship of Online Poker High Main Event tournament, which offers $1 million guaranteed to the winner. For the full list of events, please see below.

EPT Grand Final Promo (March 27 – April 6)
Win a free package to the EPT Grand Final Main Event in Monaco, which features a guaranteed €1 million for the Main Event winner. PokerStars is giving away three free Main Event packages through a series of freerolls, and also offering satellites for as low as €11. Make a deposit now and claim a free €11 satellite ticket.
Click here for more info.

Millionaire Month (Round 1: April 6 – 17, Round 2: April 19 – 30)
More than $4 million in cash prizes is up for grabs during Millionaire Month. Players can qualify for $150,000 All-in Shootouts by completing simple challenges, and the winner of each of the six All-in Shootouts in Round 1 (April 18) and in Round 2 (May 1) will advance to one of two six-player Millionaire Finals tourneys on May 10 at 13:00 ET. The Millionaire Finals tourneys will award each winner $1 million.
Click here for more info.

SCOOP All-in Shootout Deposit Raffle (May 2-22)
The Spring Championship of Online Poker (SCOOP) High Main Event is offering a first-place prize of at least $1 million. Players can win through a raffle ticket, which is earned by making a deposit. Raffle ticket holders will be entered into the All-In Shooutout, which is giving away 16 free SCOOP High Main Event entries worth $10,300, as well as over 2,000 free entries to the SCOOP Low and Medium Main Events.
Click here for more info. 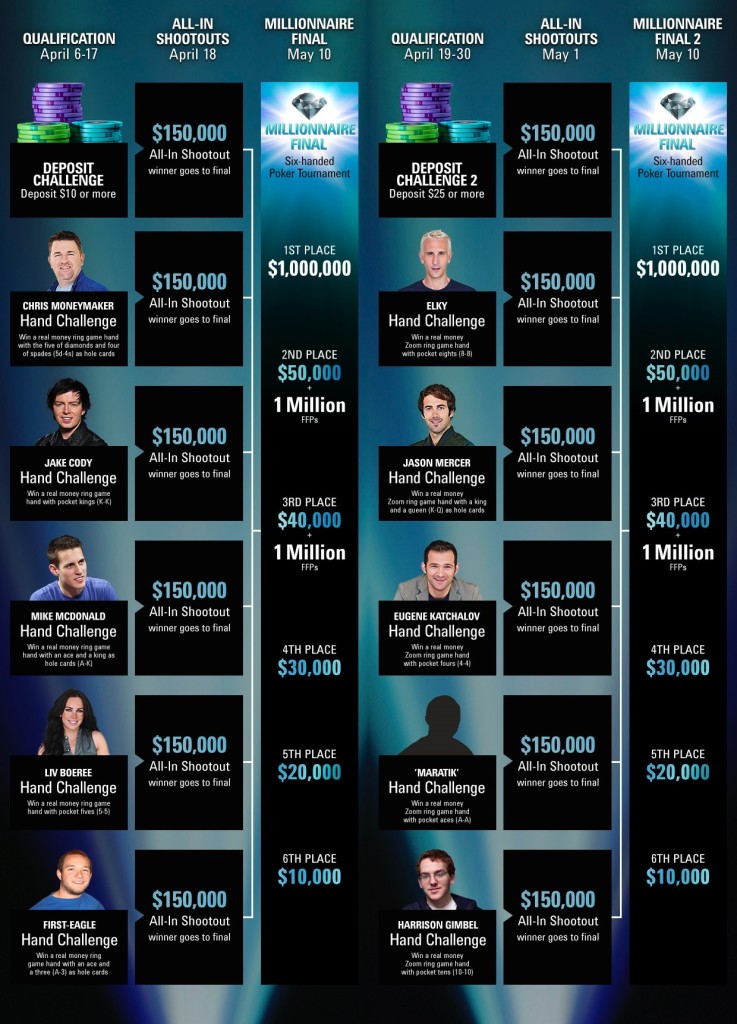