Flop Turn River > Poker News > I Went to the PokerStars VIP Party in London, and All I got was a Massive Hangover!

I Went to the PokerStars VIP Party in London, and All I got was a Massive Hangover! 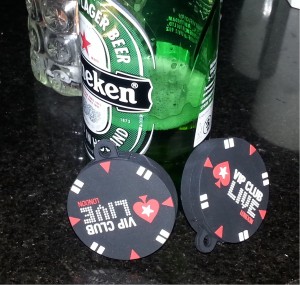 Sometimes, working in the Poker Media world is tough. Waiting hours for a poker player to turn up for an interview, sat watching hours of a live stream devoid of exciting poker, going to dark dingy small casino’s to watch less than great players fight over small prizes, spending hours railing the online high stakes action. It can be a real grind sometimes, but last Saturday night was very much the other side of the coin.

I was lucky enough to have a friend of mine offer me his +1 ticket to the event, allowing a low volume recreational player like me to rub shoulders with players who have earned many more VPPs than I have.

After a few pre bash drinks in a local public house, we headed over to the first venue: Cirque le Soir.

On the way in, one of our group managed to gain a SuperNova Elite wristband, which was meant to give him some special privileges later in the night. We’re still not quite sure how he managed it, especially as he was wearing a PKR shirt for most of the night! Armed with our various wristbands of many colours, we descended into the basement club, and were met with a scene that wouldn’t look out of place in the early 2000’s HBO show Carnivale. We had various stage performers, including a dwarf, a contortionist, a fire eater and many more. The started off walking through the club holding what appeared to be small fireworks spewing glittering sparks from their lit end. 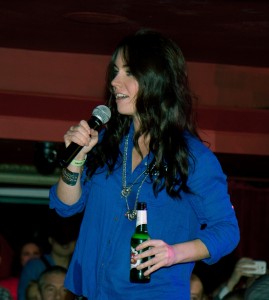 We were welcomed to the club by Lee Jones and Liv Boeree, both of whom climbed onto one of the small stage areas in order to address the large, and very excited crowd. Following a short and sweet announcement, the party started in earnest. Free drinks flowed like water, and it didn’t take long for several of us to head towards the rear of the club where a slot car track, a punch bag and other entertainments were waiting for us to get to grips with them (as an aside, my knuckles still hurt from punching that damn bag).

Liv was enjoying the physicality of the punch bag, and was taking on prop bets on her ability to outpunch pretty much everyone. From my rather hazy recollection, I’m pretty sure she ended up with a profit. Being a gentleman (and nearly a foot taller, and at least 6 stone heavier) I decided not to compete. After all, if I lost I’d never live it down. 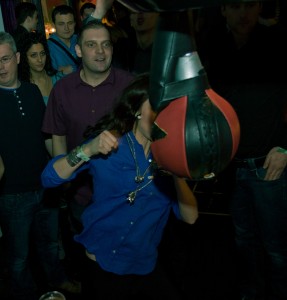 After several drinks, and more industry schmoozing than I really should have done drunk, we picked up our coats and headed out into the cold to travel to the second destination, DSTRKT.

It wasn’t a long walk, and the night air probably sobered us up enough to enjoy our time in the new club without risking getting thrown out for being overly drunk. DSTRKT is also a subterranean club, and has been the venue for the last two EPT parties, so I was familiar with the layout before I got there. Trays of food were circling around the room (as they had at Cirque le Soir) and we launched into soaking up some of the free alcohol we already had floating in our systems. With pretty decent small burgers, and a really nice lemon chicken, we were refreshed to go back to the bar, and with the bar remaining free until the early hours, it would have been rude not to take advantage. I hate to be rude. 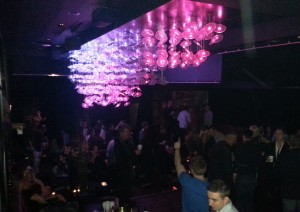 A fuzzy Phone Photo from DSTRKT

Everyone we were able to talk to over the traditionally ear bleedingly loud DJ set was fantastic. Not something I’ve ever said before, but I didn’t meet an asshole all night, and if you know the London club scene, that alone is worthy of comment! It seems that a free party of poker players is full of nice fun people. Not sure if it was the free bit, or the poker player bit that had the most impact on that, but regardless, everyone was great!

We never found out what the special deal was meant to be with the SuperNova Elite wristbands as our resident SNE wristband wearer disappeared and apparently ended up passed out in a London doorway! It’s not a good night if someone doesn’t make a tit of themselves, and Chad (our SNE for the night) certainly did that!

We left just before the free bar was due to close at 1am, and walked 5 minutes down the road to the PokerStars Live Lounge at the London Hippodrome Casino, but that’s another story!