We Rank the Last Decade of WSOP Main Event Champions

On Tuesday night, Martin Jacobson was crowned the 2014 World Series of Poker Main Event champion, earning a cool $10,000,000 for his efforts and a place in poker history. Speaking of poker history, just how does he rank up against the last decade of Main Event champions? You’re about to find out, as we proudly present to you our totally tongue-in-cheek breakdown of the last ten winners. 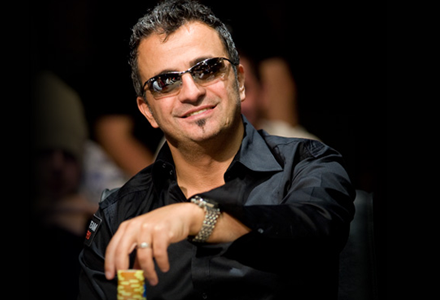 The 2005 Main Event champion was the first Australian to win the event, taking home a record (at the time) win of $7.5 million. Since then, he has served as a worldwide ambassador to the game, traveling across the globe and cashing in numerous tournaments, with his lifetime winnings exceeding $11.8 million. He is only one of five poker players to win the WSOP Main Event and a World Poker Tour Championship.

Outside of the occasional outburst of poor sportsmanship (which happens to the best of us), there really isn’t too much to criticize about Hachem. He’s well dressed, well spoken, and a great representative of the game. 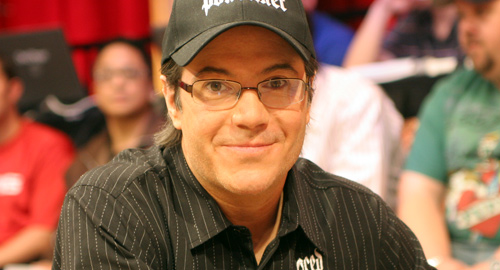 Outside of Russ Hamilton, there probably isn’t a more hated Main Event champion than Jamie Gold, who won his title during the “Golden Age” of poker, outlasting a field of 8,773 players to take home an incredible $12 million. The problem for most fans of the game was how he did it, and what happened afterwards.

Gold may have shown an uncanny ability to table-talk his opponents into making the wrong decisions, but then again, he also hit an extraordinary amount of lucky hands along the way. To make matters worse, he also spent most of the tournament taunting other players and angle shooting—talking about, and even showing, his cards to push players into making certain decisions, which is illegal just about everywhere poker is played. Nevertheless, he was never penalized.

Following the life-changing win, Gold continued to prove that “you can pay for school, but you can’t buy class.” In the months following his win, Crispin Leyser, who allegedly sponsored Gold’s tournament buy-in fee in return for half of his winnings, sued Gold for refusing to pay up. The two would eventually settle out of court, but a sour taste was left in the collective mouths of poker players everywhere.

2005 Main Event Champion Joe Hachem said it best: “Jamie Gold and Jerry Yang have destroyed the legacy of the world champion.” Which brings us to the next person on our list… 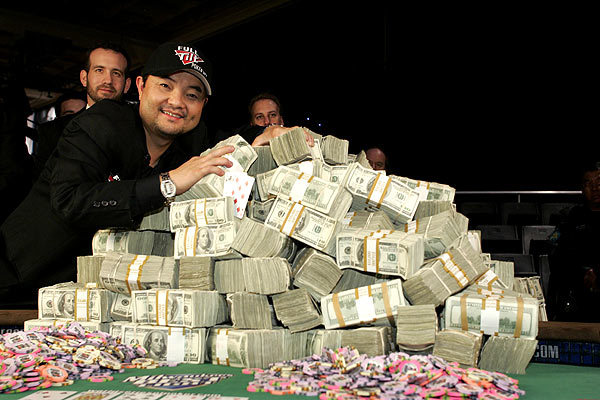 Poker Skill: “I believe that God had a plan for me to win the World Series of Poker…”
Marketability: Probably a hit with the Bible Belt.
Chances of a repeat performance: Might as well try to walk on water

Jerry Yang may love Jesus, but the poker world sure doesn’t love Jerry Yang. Although it’s hard to dispute Jerry’s play on the final table of the 2007 Main Event, his constant prayers and overt religiosity certainly didn’t help make him a brand name.

Here are just a few quotes from his Main Event run:
“Father, in the name of Jesus Christ, c’mon, let me win this one.”
“Let people see your miracle.”
“Lord, give me a set.”

Call us a bunch of cynics, but we have a feeling that God doesn’t watch the WSOP.

Some people have taken to calling Yang “a bigger bust than Jamie Gold.” Since winning the 2007 WSOP, Yang has experienced financial difficulties, and he was forced to sell his Main Event bracelet in 2013. 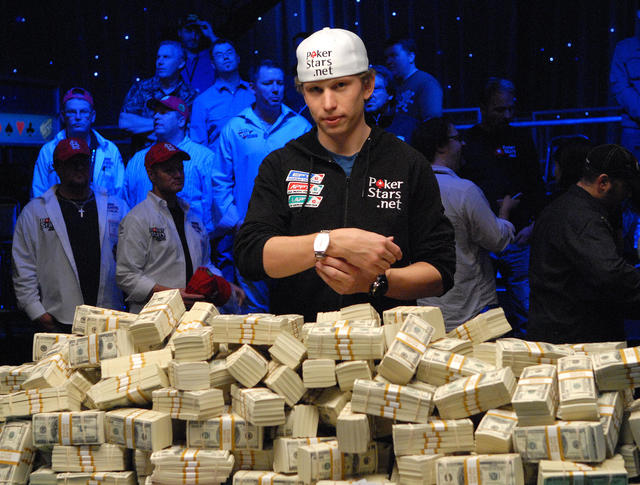 Retired from poker: For all of 8 months
Claim to fame (Other than the Main Event win): Getting owned by durrrr on High Stakes Poker
Possible Nickname: Peter “Beastgate”

At the time of his win, the 21-year-old Peter Eastgate became the youngest ever player to win the event, surpassing Phil Hellmuth, who was 24 when he won in 1989. The following year, Eastgate made a valiant defense of his title, eventually finishing in 78th place. In 2010, Eastgate retired from professional poker and auctioned off his Main Event bracelet for $147,500, which he then donated to charity. His self-imposed retirement was short lived, however, as only eight months later Mr. Eastgate returned to the tables. So much for riding out into the sunset, eh Pete? 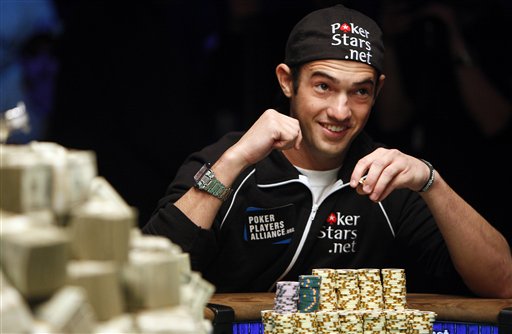 The King of: Hitting two-outers all-in
Proud owner of: Cada’s Poker & Sports Grill
Not so proud owner of: One of the sickest poker graphs of all time

Cada currently holds the distinction of being the youngest player to ever with the Main Event, winning the title at 21 years of age. He also holds the record for making the largest ever comeback on the final table—at one point, Cada had only four big blinds and 1.2% of the total chips in play. How did he survive? Why, sucking out 33 vs JJ and 22 vs QQ of course! You can’t brush Cada off as a total luck-box, however, as the young pro also shipped the 2014 NLHE 6-handed event for $670,000. 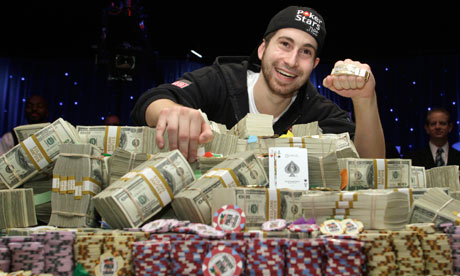 I remember Jonathan Duhamel for two things—an incredible suck-out and a horrible robbery. In the first instance, Duhamel put an all-time bad beat on Matt Affleck, to the tune of 41 million chips (approximately 20% of the chips in play) and what I have to assume is several million dollars in prizes and endorsements, when he hit a straight on the river to crack Affleck’s pocket aces shortly before the final table. I’ve watched the hand countless times on YouTube and I still don’t know how he called on the turn—what exactly was he beating?

In the second instance, Duhamel’s ex-girlfriend, working alongside three other individuals, robbed Duhamel during the 2011 holiday season. The thieves stole a PokerStars watch worth $10,000, $115,000 in cash, and Duhamel’s Main Event bracelet, worth $50,000. The suspects were eventually caught and convicted, and his ex-girlfriend is currently serving a 3.5-year prison sentence. The WSOP bracelet was eventually recovered, along with nearly half of Duhamel’s money. The watch? One of the suspects was still wearing it when he was arrested. 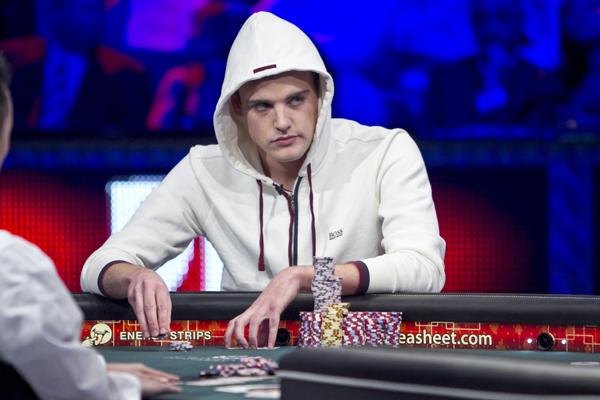 His name might sound like a holy bottle of ketchup, but he is, in fact, the 2011 World Champion, and the first German player to the win the Main Event.

Originally an online player, Heinz said that “the live game is pretty boring and you need a lot of patience.” Based on this year’s incredibly drawn-out final table, I’m inclined to agree with him. This might also be why he was so hyper aggressive during his run to the top. Along the way, he also needed a lot of luck—he got it all-in pre-flop KJ vs. AK for 16.8MM chips and hit a 5-outer on the river to win with a straight in order to make the November Nine. He began the final table in 7th place but managed to overcome the odds—and a few more all-ins—to claim the 1st place prize of $8.7 million.

He will perhaps be best remembered for this hilarious quote from Norman Chad: “When he gets dealt 5-7, does he appreciate the poetry?” (Get it? Heinz 57…) 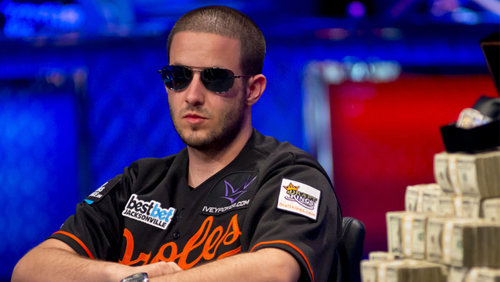 2012 was a big year for Greg Merson. Not only did he win two bracelets—the other being the $10,000 Six Handed No Limit Hold’em World Championship—he also took down player of the year honors, outlasting the one and only Phil Hellmuth. Want to hear the craziest part of it all? Merson almost left with only $50,000 in the Main Event.

At one point in the 2012 Main Event, Greg was down to only 2.5 big blinds at risk to finish in 150th place. Somehow, the online shorthanded cash star crawled his way back, eventually making it to the November Nine in third place. By the start of three-handed play, he had over 46% of all the chips. The rest, as they say, is history. 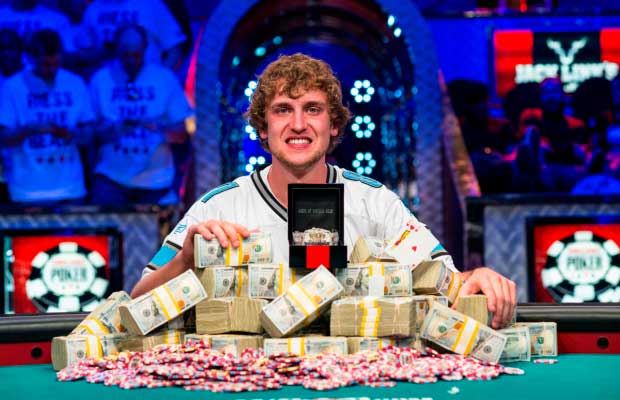 It’s one thing to be confident in your own poker abilities; it’s another thing altogether to proudly proclaim that you are the “best poker player in the world.” No, we aren’t talking about Phil Hellmuth—although he certainly fits the criteria—we’re talking about Ryan “The Beast” Reiss, who won last year’s title and over $8.3 million. We understand that emotions sometimes run high, but during an interview with Fox News the day after the win, Ryan expressed that he had felt that way for “several months.” Did someone forget to tell him that Phil Ivey is still alive? 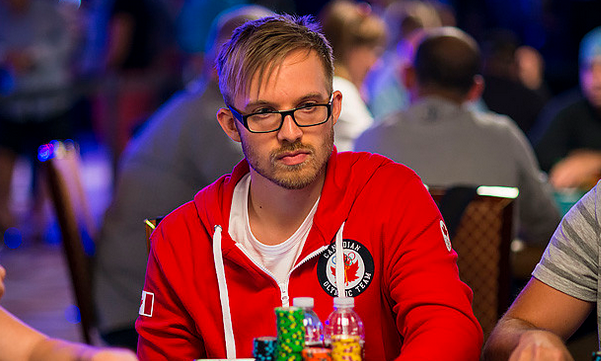 Odds to Win at Start of Final Table: 7 to 1
The difference: No sunglasses
Who we really wish won: Mark Newhouse

The most dangerous player on the table started the November Nine in 8th place with only 14 million chips, but after 16 hours of play he was the last person standing. The health-conscious player has been a consistent winner in the world of poker long before his Main Event win, amassing nearly $5 million in tournament winnings before he took home the world championship. Fittingly, he ended the first day of the Main Event (Day 1a) as chip leader, and he ended the last day as champion.