Seidel Can’t Get It Done and Event #6 Goes Heads Up.

Friday’s action saw Poker Legend Erik Seidel adding another big second place to his poker resume as he failed to seal the deal in Event #5, and Event #6 played down to the final four in preparation of the series winding down to allow the Main Event take precedence.

The third, and final, day of the €2,200 No Limit Hold’em Event #5 played out yesterday as the final seven players all did their best to win a WSOPE title.

The obvious favourite going into yesterday’s action was Erik Seidel, who had nearly twice the stack of any other player at the table. It was all looking good for Seidel, and he even went into the heads up portion of the event with twice the chips of Roger Hairabedian. It seems it just wasn’t in the cards for Seidel to pick up another bracelet, and Hairabedian was able to pick up his second WSOPE bracelet. 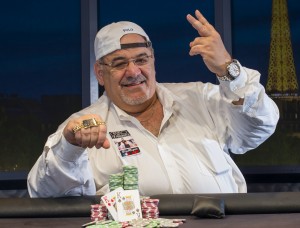 The final seven ended up as follows:

A full report form the final seven will be posted later today.

The first ever WSOPE €3,250 Mixed Max Pot Limit Omaha played down to the final four during the action from Friday. 29 started the day at the tables, with only 15 of those going to be picking up and return on their investment and time. This left several well known pros out in the cold, and this group included Barry Greenstein, Dan Kelly, Phil Gruissem and Daniel Laidlaw.

The final four are playing in heads up brackets down to a final winner, and we’ll have a write up on their action tomorrow.

The chip stacks going into these matchups are:

Player of the Year

Matthew Ashton has increased his lead at the top of the Player of the year standings after his cash in Event #6, and is nearly 100 points ahead of nearest rival Daniel Negreanu. It may be a little early to call it, but the smart money is going to be on Ashton to win this.

We’ll be back tomorrow with the action from Day 1a of the main event and the outstanding business from heads up brackets left in Event #4.