No matter how much we all love poker, most of us don’t have any real reason to invest a huge amount of money in our home game poker sets. We are going to use them time and time again, after all, so why would we spend a ton of cash on cards and chips when they are going to be passed around, dropped, thrown, splashed and just plain abused by ourselves and our friends repeatedly?

On the other hand, a lot of hosts take great pride in their home game sets and will do whatever it takes not to just keep up with the Jones’ set, but to buy a presumably better and certainly more expensive set for themselves. If you are one of the people who consider your home game set to be a status symbol or you’ve won the lottery and are looking for ways to spend a portion of your winnings on an asset that is not likely to appreciate too much in value during your own lifetime, then you might want to pick up at least one of the six most expensive home game poker sets we could find.

Here they are, ordered from least to most expensive: 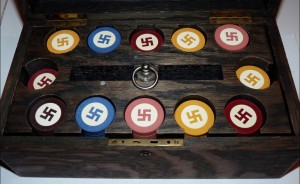 For just $1,999.99, you can buy this set of vintage clay inlaid swastika poker chips with the original box still intact. There are a total of 283 chips which were apparently manufactured before WWII broke out in this set. The person selling them is a collector and has a lot of vintage stuff for sale although this item probably stands out the most even to someone who doesn’t play poker.

If anyone even buys this set, it’s likely going to be another collector. However, if you do decide to spend $2,000 on swastika poker chips, then congratulations on being the next host of the weirdest, most politically incorrect home game in the world. 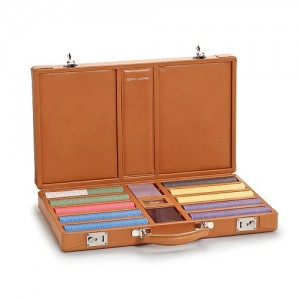 Asprey, a 200 year-old UK-based luxury goods company, is well known for its designer products. From jewelry to board games, Asprey has it all, including a $7,500 poker set in cinnamon-colored English saddle leather.

The set contains 550 ceramic chips, 2 packs of Asprey playing cards and a dealer chip that has a palladium finish. The carrying case also has palladium locks on the front of it. 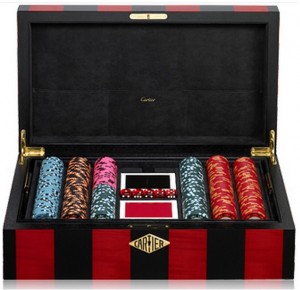 If you are willing to spend $7,500 for an Asprey poker set, then you might want to consider another option first. Founded in Paris, France by Louis-François Cartier in 1847, Cartier designs, manufactures and sells high-end jewelry and watches throughout the world…and now, the company also makes the occasional luxurious poker set.

For only $10,100, you can buy this one-of-a-kind set which contains 360 chips in five colors, two sets of playing cards and five dice in a red and black, wood, gold-plated chest. 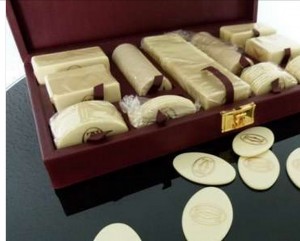 Being sold on Ebay by the Gallery of Design and Culture in Dortmund, Germany, this set is truly unique and unlike any other on this list; the chips are made of plastic and they have a genuinely original design.

This set is distinct from the other sets in this list for another reason, too – its description says its worth over $30,000 even though the set is currently for sale for “only” $7,500. It’s hard to estimate the true worth of this novel set because its description does not say much else about it, but since its value is likely more than $10,000 this set gets a well-deserved third place on our list. 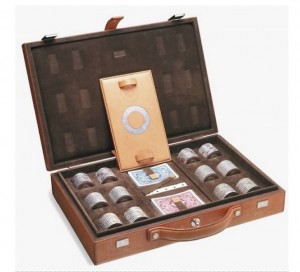 Designed and developed by Swedish jeweler, Stahl, The Meteorite Poker Set is the second most expensive poker set in the world, priced at $150,000. It is carved from an 800,000 year-old meteor located in northern Sweden which is known as “Muonionalusta“.

All of the elements included in the set are covered with 18-karat white gold and decorated with precious, premium quality stones such as diamonds, Burmese Rubies and Sri Lankan Sapphires. It contains 120 chips, a deck of cards of superb quality and five ivory die.

The interior of the set’s case is made from Swedish reindeer calf skins and the exterior is made from exquisite polished leather. It is hard to imagine this set being used to play an actual game, but if you are a rich collector that likes poker, this just might catch your eye. 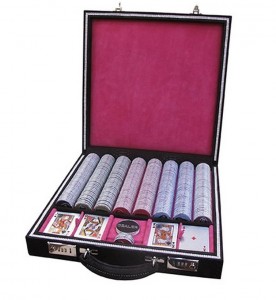 Founded in Hertfordshire, England in the early 1960s, Geoffrey Parker is known for being one of the top handcrafted game manufacturers in the world. A few years ago, Geoffrey Parker shattered the record for the most expensive poker set when the company introduced one that costs $7.5 million.

Made for the ultimate high stakes game, the case is covered with genuine alligator skin which is finished in the color of the client’s choice. Combination locks are fitted with 18-karat white gold and the suede lining features an 18-karat gold and diamond frame.

Inside you will find 384 18-karat white gold chips, each inlaid on both sides in stingray which can be in any currency and denominations the client desires. The edge of each chip is set with precious stones – white diamonds for the white chips, sapphires for the blue, rubies for the red, emeralds for the green and black diamonds for the black. The dealer button is also fitted with 18-karat white gold and set with two rows of diamonds which extend to the button’s edges. The set has a total of 22,364 precious stones which equals 1,012 karats. To top it all off, the set includes four platinum-plated decks of cards.

If you have the money and the desire to buy this, you may be a bit disappointed since the expected delivery time for this work of art is six-to-nine months.