Tuesday’s Action from the WSOPE 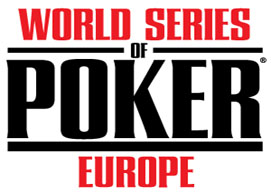 Tuesday the 16th of October 2013 was another day of action at the Casino Barrière just outside Paris as the WSOPE played through its fifth day. We had the final table of Event #2 while Events #3 and #4 were also in action.

The €1100 No Limit Hold’em Re-Entry Event #2 played it’s final day yesterday, with the last nine players all guaranteed to add €12,134 to their bankrolls. The eventual winner was Henrik Johansson who beat out relative new comer to the game Adriano Torre-Grossa. Johansson takes home €129,700 for his win along with his new glitzy piece of arm bling. 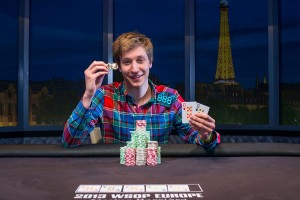 The final results from the final nice were as follows:

A full final table report will be up later today.

The late registration for the €5,300 Mixed Max No Limit Hold’em Event #3 was still open this morning, and an extra five players added their names to the list of those hoping to take down this bracelet event. That takes the total number of entries to 140 and the prize pool to €672,000.

The action during the second day, this one of 6-max action, ended when the field was shrunk to just 16 players. With these 16 players being the only ones to cash from this event, it meant that names such as Phil Hellmuth, Scott Clements Konstantin Puchkov and Jeff Gross left with nothing for their efforts.

The top ten in chips going into Day 3’s action were:

Play has already started today, and the players are going to play down to just four competitors left, who will play out the rest of the event in a heads up format.

Ryan Chapman ended the day as the chip leader, eliminating players such as Barry Greenstein, Alan Gold and Michael Mizrachi. He started today’s action with 96,600 in chips.

The 34 surviving players have already started today’s action, and have burst the bubble.

All of today’s action will be updated in our report tomorrow, and we’ll have a look at the Player of the Year race as well as the action from the first day of the €2,200 No Limit Hold’em (9 Handed) Event #5.