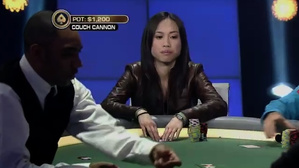 It was announced 6 long months ago that FTR veteran Courtney Gee, better know as courtiebee, landed a seat on the PokerStars Big Game. She flew out to Vegas in February, was given $100k and played against the top pros. Since then she has been sworn to secrecy by Lee Jones and has not been allowed to say one word about how it turned out. Well, the wait is now over because her show is currently airing this week!

Don’t have cable? You can watch online! You can currently watch episodes 1-3 at PokerStars TV with 2 more set to be released on Thursday and Friday.

I don’t want to give any spoilers, so just go watch for yourself! If you want to comment about any part of Courtney’s session, ask her a question, or to let her know you have yellow fever, you can do so in the thread in the FTR Commune.