WSOP APAC EVENT #1 has a Champion! 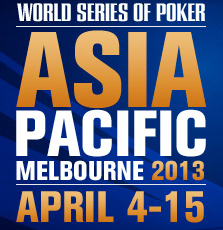 The Crown Casino, in Melbourne Australia, has seen the first ever WSOP APAC bracelet handed out. The historic event saw the golden jewellery go to “Run it once” instructor Brian Piccoli. Piccoli went into the Final Table with the chip lead and beat out touch competition from a tough final table that included 2010 WSOP Main Event Champion, Jonathan Duhamel. The player, known online as “theczar19” takes home A$211,575 to go with his new bracelet.

Not long after the presentation, Piccoli was on Twitter, showing off his new Bling:

A$130,743. He was cheered on by a very vocal Aussie rail, all cheering and praying for the local boy to start off the first WSOP event in the country with a dream start, and a local champion. Unfortunately for him, and the local supporters, 2nd was the best he could do, but he has a couple more chances to grab a local bracelet before the party moves back to Vegas to get ready for the WSOP in May.

The results for the final table are:

And with that, the first WSOP APAC bracelet has been won. Keep your browser pointed at FTR, and we’ll keep you in touch with the rest of the action from down under.