13 is considered an unlucky number to a lot of people, and the majority of the players who started Day 5 of the 2013 WSOP Main Event won’t have much evidence to contradict this assertion.

239 players started the day in hope that the 13 thing was a myth, but only 68 players survived the day, leaving 171 players thinking the curse of the 13 had struck.

At least the curse of the 13 happened after the bubble, and everyone left in the Main Event is going to walk away with at least $102,102 regardless of how many hands they last in Day 6.

During the five two-hour level Day 5, several stories were crushed into non-existence, while several stuck their head above the parapet, just tempting fate to shoot it off. 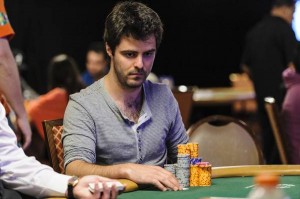 Max Steinberg, Out of the 2013 WSOP Main Event

One of those stories that has unfortunately come to an end is the progress of FTR’s own Max Steinberg. Max was eliminated from the Main Event in 131st place for $50,752. He’d joined the feature table with about 330k, having lost most of his chips earlier, and his last hand of this year’s WSOP looked like this:

Max limped in the cuttoff, and went to the flop with Ashton Griffin in the small blind and Eli Heath in the big blind after neither of them raised. The flop of 5

shone up from the felt, and saw Griffin check. Heath however made a bet of 36k into the 100k+ pot. Max casually tossed the chips for a call into the middle, and griffin departed the hand. The turn was the K

, and saw Heath continue his line with a 67k bet. Max was obviously not a believer, and slid the rest of his chips over the line to put his tournament life at risk. After the chips were counted, it took Heath a couple of moments to come to his decision, but he made the call, showing his 5

for a flopped two pair. Max had hit the turn with his K

, and needed to hit an Ace, a King, a Deuce or a three on the river to stay alive in the Main Event.

The River brought the Q

, and sent Max to the rail with enough to pick up more than few new ties! We’re hoping to see Max play the WSOPE in October, and maybe pick up another bracelet, this time in Paris.

We also saw the end of this year’s WSOP saga for reigning Champion Greg Meson. With both the media and the rail keeping a very close eye on Merson, but he didn’t get out of Level 22. Brett Richey min raised from middle position, and Merson moved all in for his last 24 big blinds. Richey was the only one to call, and the moment the cards were exposed, it was obvious Merson needed the favour of the God of Poker to survive. Merson’s A

was dominated by Richey’s A

. The flop hit both player’s kickers when it came
3

leaving Merson hoping for either runner-runner straight or flush cards or another deuce.

turn removed the runner-runner draws, leaving Merson hoping to see one of the last pair of deuces in the deck. The River however sealed his fate with the 4

The player in pole position to replace Merson as the World Champion is Sami Rustom, who is sitting atop the chip count with 7,005,000, over 300k ahead of Marc McLaughlin in second place with 6,695,000. This is already Rustom’s biggest live cash ever, his previous being a $16,585 cash in a 2007 WSOP Event.

We do still have a former Main Event winner in the field in the form of Carlos Mortensen, who actually managed to double his stack on the very first hand of the day. Mortensen won the 2001 Maine Event for a comparatively small $1,500,000, and hasn’t been making that many waves in this year’s WSOP so far. He starts Day 6 with 2,665,000 chips in his stack, and will be hoping to make it to his first November Nine.

Also hoping to make their first November Nine, and representing 50% of the population, Jackie Glazer is the last woman standing. Currently sitting in 12th place with 4,045,000 Jackie isn’t only representing the ladies in this Main Event. If she was to win, it might lead to a mini boom in Poker, as the first female WSOP Main Event Champion is going to be a marketer’s dream. I also think Jackie’s Bank Manager might be pretty pleased with the results as well!

Day 6 is kicking off tomorrow, and with no live stream from the Main Event this year, we’ll be doing our best to keep you up to date with all the important news here on FTR. Keep an eye on our twitter account for up to date information.