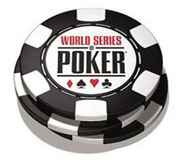 The 14th saw the reduction of the WSOP Main Event field from 68 down to just 27 hopefuls. They will be returning to play Day 7, where they will fight tooth and nail (and anything else they can find) to be one of the last nine players standing at the end of Day 7. The November nine will be back in, surprisingly enough, November to play out the final table.

Those who are playing Day 7 will be very conscious of the fact that 66% of them are going to have to make do with a payout, rather than a return trip in November. Everyone still in the event is guaranteed a $285,408 payout, but being poker players, everyone is still focussed on the $8,359,531 first prize, and all the players are doing their best to be the one to pick that up in November.

With the field in the 2013 WSOP Main Event contracting fast, the number of heroic stories and records in the making are shrinking at an alarming rate for those of us in the Poker Media.

Sergio Castelluccio had min raised from middle position, and the action folded round to Jackie in the big blind. She shoved her 1,975,000 stack into the middle, and was snapped off by Castelliccio.

The card were turned over to give us a race. Glazier had AsQs while Sergio had got her covered with his ThTd. The flop was dealt, and the board seemed to be stuck on one number as it came out 9h9s9c. It Gave Jackie some extra outs as the case nine would give her quads with a better kicker. The turn was a brick, coming out the 5c. Glazier (and every poker marketing expert in the world) was hoping to see an Ace, a Queen or a Nine on the river. Poker is a cruel mistress, and brought us the Kh, sending the last female player to the rail. In doing so, the God of Poker was removing the option for a mini boom in poker, as women around the world were denied the chance of a role model world champion. 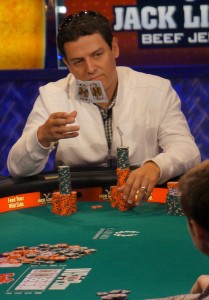 However, we do still have a former World Champion in the field. Carlos Mortensen won the WSOP Main Event in 2001, and he’s still very much in the running to make this his second title. Mortensen is currently sitting in 6th place in the chip counts with 10,790,000, and the Spaniard is looking good to make the November Nine at this rate.

Carlos needed to take every advantage he could find early in the day, and during Level 27, while shortstacked, he got into an interesting hand.

Jorn Walthaus made a min plus raise from middle position, and the action folded round to Carlos’s big blind. He jammed in his remaining chips, putting the onus back on Walthaus. He snap called, showing KsKh, which had Carlos’s AdKd in bad shape.

The flop came down QsTh2h adding a Jack to Mortensen’s outs. The turn was the 6c, leaving the river to decide the Spaniard’s fate. Every second must have felt like a year to Carlos, but finally the river was dealt, and the Jc doubled him up, and re-invigorated his quest for another title. Anyone who says you don’t need to run good to win an event this big really doesn’t know what they’re talking about, and this may be the turning point that leads to Carlos coming back to Las Vegas this November.

The big new name to jump out of the screen today was Anton Morgenstern. The German is relatively unknown, with a 26th place in this year’s Event #57 for $24,872 and a Cash in the 2011 EPT Berlin for about the same being his biggest live cashes. However, he is currently sitting on top of the chips counts with 21,955,000 in chips, more than 7 million chips ahead of Sylvain Loosli in second who has 14,125,000.

If we can’t have a final nine filled with household names playing a level of poker most of us could only dream about, at least we’re likely to see a decent mix of nationalities coming back in November.

From the final 27 players left in the actions, 12 are American, 3 are Canadian, 3 are French, 2 are Dutch, and we have one a piece from Spain, Israel, Italy, The Czech Republic, Germany, Brazil and Argentina. Given this is the World Series of Poker, it would be nice to see different parts of the globe represented at the final table.

Whomever makes it to the final nine, we are in for a long day on the 15th, as we have to wait for 27 players to be whittled down to just 9, and that may take longer than the 5 two hour levels we’ve been seeing as a standard day in the this main event so far.

We’ll have the results from this in our round up tomorrow, and we’ll try and give you some background on the new November Nine.