After 171 hands and 8 hours of play on the final table of the 2013 World Series of Poker Main Event, only two players remain. Club promoter Jay Farber sits as chip leader at 105 million and young poker pro Ryan Riess with 85.675 million, and both players are eager to take down the world title and the $8,361,570 first-place prize. The action will continue tonight on ESPN at 8:45 p.m. ET and will be broadcast on a 15-minute time delay. To see the results of last night’s final table, including the elimination hands, read below. 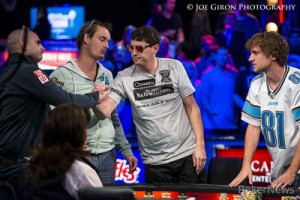 It only took 36 hands for the first member of the November Nine to exit the final table. Short stack Mark Newhouse survived an all-in scare early on when he doubled up with pocket Queens by out-flopping Marc-Etienne McLaughlin’s pocket Kings, but he wasn’t so lucky a second time. He shoved his last 10BB with 9

and was called down by Ryan Reiss and A

. The board came out K 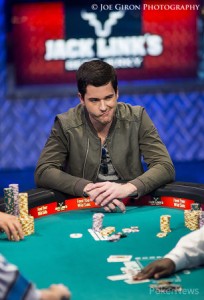 Only two hands after the elimination of Mark Newhouse, another player would hit the rail. Sitting with only 17BB, David “Raptor” Benefield shoved all-in with K

and was immediately called by Jay Farber, who was miles ahead with A

would send Benefield, who managed to doubled up early on in the final table, home with $944,650 for the 8th place finish. 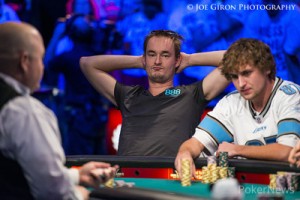 Michiel Brummelhuis was the first player from the Netherlands to make the final table, but his dream of winning the Main Event ended when he ran pocket 7s into Ryan Reiss’ pocket Aces. Earlier in the day he had survived an all-in flip against Reiss when his pocket 9s held up against AQ. He received $1,225,356 for his seventh-place finish. 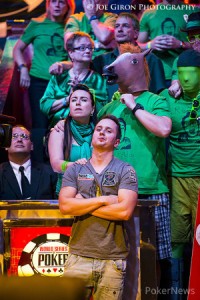 After three relatively quick eliminations, it wasn’t until hand 157 that the sixth-place finisher was eliminated, and it took a cooler to do so.

McLaughlin could only shake his head in disgust and show K 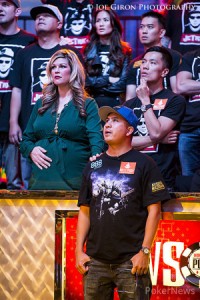 Coming in as a well-known pro and the chip leader, JC Tran was the odds-on favourite to win the Main Event. A dry run of dead cards and a hot streak by Jay Farber to his immediate left had Tran looking for answers.

Only a few short hands after McLaughlin exited in 6th place, Tran shoved all-in with A

. His nemesis Jay Farber, already priced in, made the call with K

. The board brought out K 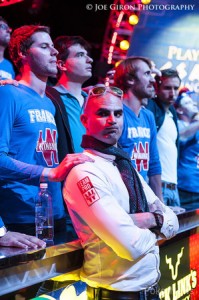 26-year-old French poker pro Sylvain Loosli was next to go. After surviving with a short stack for much of the night he made his final move with Q

and ran into Ryan Reiss and his A 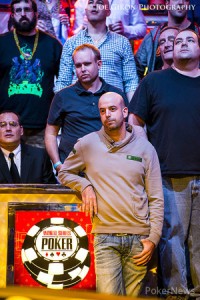 Hand #171 saw the final elimination of the night as Amir Lehavot moved all in with pocket 7s and ran into the pocket 10s of Ryan Riess. Lehavotwon $3,727,823 and raised his life-time live winnings to more than $5.3 million.

Tonight’s heads up play will begin at 8:45pm ET on ESPN and will be broadcast on a 15-minute time delay. Tune in to see who will win the Main Event bracelet and the $8,361,570 first-place prize! 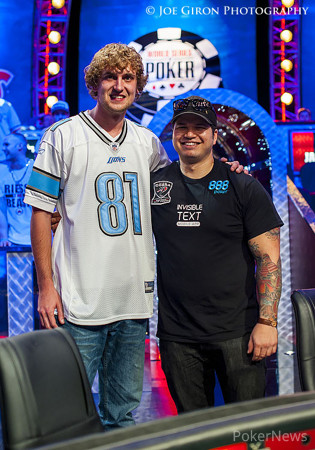 Jay Farber vs Ryan Riess for the WSOP Title!