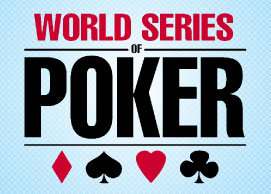 Last night saw the WSOP Main Event final table start and complete it’s heads up battle between Ryan Riess and Jay Farber. The competition between these two lasted 89 hands, but started after 171 hands of the final table had already been played on Monday bringing the number of competitors down from the original November Nine to just these final two.

Farber came into the final day with the chip lead, his 105 million stack slightly eclipsing Riess’ 85,675,000 pile of chips.

The players were really deep, with the smaller stack Riess having 85 big blinds, it was always going to be a longer heads up match than last year, where it took only 17 hands to crown a winner.

The first big hand was the 19th of the day, and saw Farber open the action with a min bett from the button. Riess bumped the action to five million, and Farber called to bring the flop. The flop fell A

and Riess continued his aggression with another 5,000,000 bet, which Farber flat called in position. The 7

turn card slowed Riess down, and he checked, allowing Farber to take the betting lead with an 8.2 Million statement of intent. Riess visited the tank for a good half minute before making the call. With the pot sitting at nearly 37 million, the last card completed the hand with the A

. Riess retook the betting lead, adding another 15,000,000 to the pot, which was enough to take the pot as Farber quickly folded. Riess now had the chip lead, with just over 112 Million compared to Farber’s 78.5 Million stack. 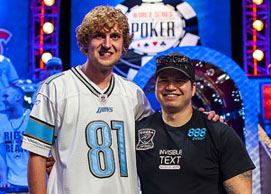 The Final Two of the 2013 WSOP Main Event

Riess’ control on the action was short lived as four hands later Farber took a 21.25 Million pot when his 24.5 million pet into a pot of around 33 Million with the board showing
3

. Farber’s rail got involved with the hand with the cry of “You gotta pay to see those cards!” Riess was in the tank as Farber’s rail continued to get rowdy. Riess counted out the call before he finally decided enough was enough and folded the hand, giving up the chip lead.

The 32nd hand was the next to get the rail’s juices flowing. Farber opened the action with a min bet from the button, and Ryan fired back a 5 million chip three bet. That wasn’t the end of the preflop action, as Jay Farber fired a four bet of 8.8 Million which Riess called to bring the flop. The first three community cards were fanned out over the felt to show 8

. Riess checked, and this time Farber checked behind. Riess showed his pocket jacks to take the hand, and Farber mucked his cards without showing.

. the board ran out A

and Riess’ first chance to win the title passed without the 23 year old clinching the deal. 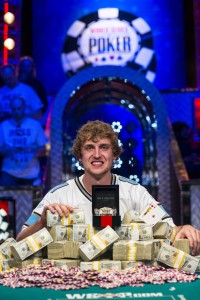 With Farber down to around 16 Million, he defended his big blind to Riess’ min raise from the button. The flop was spread showing K

for an open ended straight draw, while Reiss had K

for top pair and a back door straight draw. Riess was favourite to pick up the bracelet, but the 9

on the turn left him hoping for a Jack on the river to chop the pot. The chop pot wasn’t to be as the Q

With the blinds up to 600k/1.2m with a 200k ante, Farber opened the action from the button with a 2.5 million raise, and Riess came along to see the flop. It came K

, Riess checked, and the called after Farber slid another 2.8 million into the middle. The turn was the 9

, and the betting flowed the same pattern again, with Riess check/calling Farber’s 6 Million bet. The 3

completed the board, pairing the board as well as bringing in the flush draws. Riess checked again, and Farber fired out 13 million for most of his remaining stack. Riess dipped into the tank, and finally made the call after thinking over his options for a couple of minutes. Farber showed his 9

for the rivered flush, and Riess mucked his holding to send the pot over to the Las Vegas VIP Host.

It was all for naught though as Riess continued to control the action, getting Farber down to just under 14 million before the final hand.

A 2.5 million bet from Riess started the action from the button, and Farber countered with a three bet shove. Riess made the call, and was in pole position to take the title. Farber’s Q

was behind Riess’ A

. The board ran out J

and Riess saw all of the chips in the 2013 World Series Main Event pushed in front of him. Ryan Reiss was the 2013 champion, and adds both a WSOP bracelet and $8,361,570 to his poker résumé.

Reiss was over the moon, and went to each member of his rail, and gave them a hug, reserving s particularly tight clinch for his family.

Reiss is obviously a Queen fan, as his victory tweet quoted one of their classic tracks:

WE ARE THE CHAMPIONS MY FRIENDS