The only action in the World Series of Poker Europe yesterday was in Day 1b of the €1000 + €100 No Limit Hold’em Re-Entry, and Sunday’s action attracted 295 unique entries, making for 659 total entries.

With Niels Herrgodts leading the Day 1a chip lead with 55,000 chips, Day 1b’s larger field was always more than likely to provide a new chip leader going into day 2. The odds held out, and Kilian Kramer was the one to come out on top of the pile. He starts Day 2 with nearly double Herrgodts stack with 102,400 sitting in front of the German.

Kramer had been aggressive throughout the day and was personally responsible for the elimination of more than one quality player. One of these was Ben Nicolas, and Kramer sent him to the rail towards the end of play when his J

held up against Nicolas’ 2 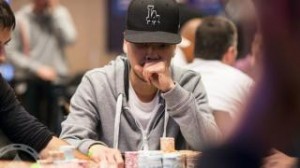 The other notable names making waves during the day included Full Tilt Ambassador Jonathan Karamalikis and former “Red Pro” Chino Rheem. Karamalikis finished the day on 81,300 and had been surprised by his image when he got a player to fold a full house to his aggression.

Rheem was active all day, and seemed to play more pots than not. His hyper laggy style seemed to work out for him though, as he ended the day with 52,600 chips, and goes into day 2 third in chips.

Those not able to make it through the day’s action included Liv Boeree, Phil Ivey, Phil Hellmuth, Erik Seidel and fresh from his EPT London final table appearance, Jeff Rossiter.

The top ten stacks heading into Day 2were:

The survivors from the two starting flights are already back at the tables, hoping to pick up their share of the €632,640. We’ll have a report from the days action in both Event #2 and the €5,000 + €300 Mixed-Max No Limit Hold’em Event #3 tomorrow.