This year saw the inaugural World Series of Poker Europe Ladies Event, and in a case of “Ladies First” the event was the first on the cards.

Going down as the first ever WSOPE Ladies champion is Jackie Galzier, who entered the final table with a chip advantage, and always seemed to be the firm favourite to win her first bracelet.

The bubble was due to take place on the final table with only seven players due to take home any winnings from this event. The idea was mooted to take €200 from each planned payout to create a payment for 8th place. The idea seemed to have unanimous support until someone asked chip leader Jackie Glazier. With her advantage in chips the beginning of the final table would offer her an advantage to use the bubble to her advantage. She declined the offer, as she was totally within her rights to do so, and the Final Table started with the bubble very much in place.

The first to leave the action wasn’t one of the short stacks but Anais LeRouge who entered the final table 5th in chips. LeRouge made a min plus raise to 1,225 and got a call from Marline Valente in the big blind. The Flop was dealt, and showed Q

as it was fanned across the felt. Valente checked in flow, and original raiser LeRouge fired out a continuation bet of 1,350. Valente raised to 4,300, and LeRouge shoved her whole stack over the line. Valente snap called showing the T

for the open ended straight flush draw. LeRouge tabled A

for the ace high flush draw. the T

on the river put Valente in front, and her pair of tens was the best hand after the 3

river. LeRouge left in 8th place without needing to make a trip to the cashier.

It didn’t take long for the next player to exit, just two hands in fact. 2012 November Nine bubbling Gaelle Baumann moved her short stack over the line from earl position and got a call from Laurie Bismuth in the small blind. Baumann was in front with her 4

but was racing against Bismuths A

over cards. The board ran out Q

to give Bismuth a pair of nines, and all Baumann’s chips. Baumann left in 7th with €3,200, and is still chasing that title to push her over the hump and into the poker elite.

Glazier started to dominate the table at this point, and she min raised it to 1,200 under the gun and got a call from both Sherrill Lindsey in the cutoff and Bismuth on the big blind. The flop was spread to show 3

and Bismuth checked and allowed Glazier to fire out a bet of 2,000. Bismuth made the call while Lindsey ran to the hills, mucking her cards.

turn saw Glazier slow down, checking to her opponent. Lindsey reched into her stack and cut out 4,000, adding them into the pot. Glazier made the call, bringing the 5

river. In a slightly strange move, Glazier acted out of flow, and moved her remaining stack over the line, putting Lindsey’s stack of around 12,000 at risk. Lindsey couldn’t find a fold, and discovered her top pair with K

was crushed by the rivered flush Glazier had with her A

Nathalie Odet was the next to go. She had just doubled her stack through Bismuth when she hit an Ace on the river, and in the following hand called a preflop raise from Celine Bastian and hit top pair on the
K

flop. It all went in on the flop, and Bismuth turned over A 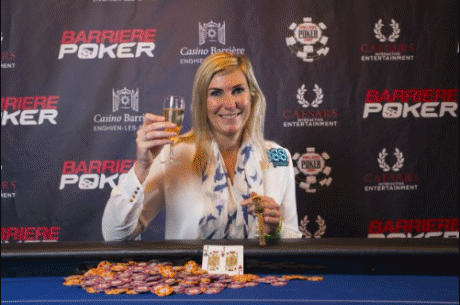 Bastian was eliminated when she shoved her J

looked good for Bastian, but the A

turn brought more outs for the Australian, and the K

against Glazier. Glazier was holding A

and the board ran out keeping the better hand in front. Bismuth finished in 3rd with a payday of €8,950.

The heads up match between Glazier and Maryline Valente took 109 hands, but ended in pretty standard, if aggressive, fashion. Valente shoved around 90 big blinds from the button with 6

and Glazier snap called with J

, and gave a little fist pump when she saw she was ahead.

Glazier, hoping to fade a 6, stood to watch the board dealt to show 4

to give Glazier her first ever WSOP bracelet.