Friday saw the World Series of Poker Europe Main event won by a 19 year old from Spain for €1,000,000. Adrain Mateos may have gone in to the final six with the biggest stack, but it was nearly impossible to name him the favourite given the others at the table.

Mateos ended up against the local hero, Fabrice Soulier, in the heads up matchup, and it certainly didn’t all go in the Spainard’s favour, but more on that later.

The final day of the main event started off with Benny Spindler trying to run over the table, raising nearly every hand. This turned out to not be a great strategy as Spindler kept running into the to end of his opponents ranges, and it all came to an end in hands #32 and #33. The first of these saw Spindler calling Jerome Huge’s raise to 50,000 with both players in the blinds. The flop fell showing 9

river brought the fireworks though, and Huge fired out 100,000 only to see the hyper aggressive Spindler shove his remaining chips to put the Frenchman at risk. Huge went into the tank, and after about 3 minutes, made the call. Spindler had been on total air with 3

while huge had been ahead throughout with A

.  Spindler was down to fumes.

In the next hand, Mateos made a min plus raise, and Spindler shoved his remaining 6.33 big blinds into the middle. Spindler started ahead with Q

The next player to go was Ravi Raghavan in hand #60. He started the action, raising to 50,000 with the blinds at 12k/24k with a 4k ante. Mateos made the call from the big blind, bringing the K

had flopped two pair, but wasn’t out of the woods as Raghavan had A

for a royal flush draw. The Turn brought Ravi more outs with the A

river wasn’t any of them, and ended his bracelet dream. He picked up €176,000 as a consolation prize.

Local amateur and satellite winner, Jerome Huge, was the next player to leave the hunt for the bracelet. It was hand #77 and Soulier opened the pot with a bet to 65,000, and huge called from the big blind. The Q

turn. Huge took control of the action with a 200,000 bet, and Soulier made the call in position. The 8

river saw Huge continue the aggression and his all in move was obviously painful for Soulier. The 780,000 bet was finally called by the more experienced Frenchman who turned over A

for a flopped two pair, while Huge was only holding 4

for a total bluff, that nearly worked.

With just three left it wasn’t until hand #130 until we saw the next elimination. Mateos raised the action to 85,000 from the button, and Dominik Nitsche moved the rest of his stack into the middle. Mateos asked for a count, got the answer of 950,000, and made the call after a little thought. Nitsche was behind with 9

but the German still had live cards. None of them hit the board though, and Nitsche ended in third place for €400,000. 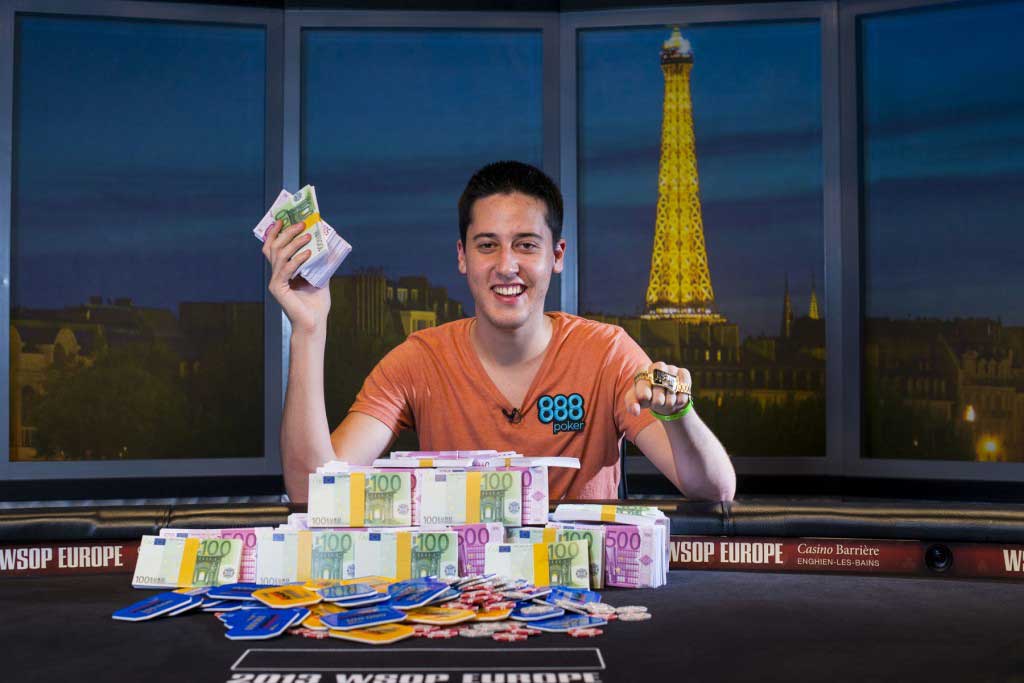 After a short break, the heads up battle started, and so started the 163 hand battle between the highly experienced Frenchman, and his younger Spanish opponent. Soulier started by chopping at Mateos chip lead and ended up taking the chip lead by running significantly hotter than the other guy at the table. Mateos showed what Tony G would call “Heart and Commitment” and was able to play back to get the chip lead.

flop and Mateos continuation bet to 275,000. Soulier shoved for 2,270,000, and after Mateos visited the tank for a long visit before he made the call. Soulier was holding 9

while Mateos had the A

turn put Mateos in the driving seat, and the 5

ended Soulier’s chances, giving the title to the 19 year old Spaniard. Mateos is now the second youngest winner of the WSOPE main event.

The final six places paid out: