At the age of 20 I was lucky if I managed not to burn the kitchen down by making a piece of toast, but Kiwi David Yan has managed to not only make the last 16 of this year’s PokerStars London leg of the European Poker Tour, he has done so as the Chip Leader. 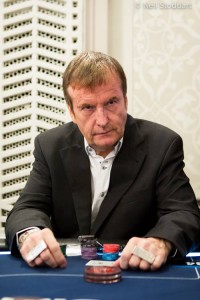 Day 4 started with 45 players left form the 604 starting field, with everyone coming back today guaranteed to be adding £11,425 to their bank accounts.

First to leave the event was dark horse favourite David Blom, brother to high stakes legend Viktor Blom, ending the fantasy of many poker fans to see a Blom lift an EPT Title. I wouldn’t have been the Blom many hoped for, but it would be close enough for many.

Day 5 wasn’t expected to be a long one, saw another fan favourite bust in fairly short order when David “Devilfish” Ulliott got it all in ahead with his
8

of Georgios Karakousis, and could only sit and watch the board run out 4

The Devilfish left with £14,940 for his 31st place finish, and it marks a return to form for the man from Hull. Not only was this his biggest cash since the 2011 WSOP, but (irrespective of the photo) Ulliott was looking better than he had for years. 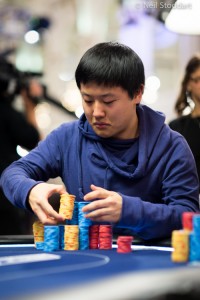 The big news was all following Yan, he was either leading the chip race, or close behind the transient chip leader during the whole day. Regular viewers of the EPT live stream will have come to know David as he has been one of the regular guest commentators for the last few EPTs, and has been providing some excellent analysis of the action as it happens.

As we have been for the whole festival, FlopTurnRiver.com is hosting the live stream , and I’ll be keeping tabs on Yan’s progress as James Hartigan, Joe Stapleton, Matt Broughton and Marc Convey provide their usual award winning commentary. You can also get involved with the live stream by using the #EPTLive hashtag on Twitter, and if your tweet attracts enough attention, it may get read out on air.