5 Card Draw is one of the most popular draw variants of poker. This means that players, after being dealt a complete hand, may discard some of the cards in exchange for new ones. Usually the game is played with six or less players per table and either as fixed limit or pot limit. While still popular in home games, 5 Card Draw is not commonly played in casinos.

Next, all players are dealt five cards, face down, one at a time, starting with the person to the left of the dealer. After everyone has received their cards, the rest of the deck is set aside and players may now look at their hands. It is important that each player keeps their cards concealed. 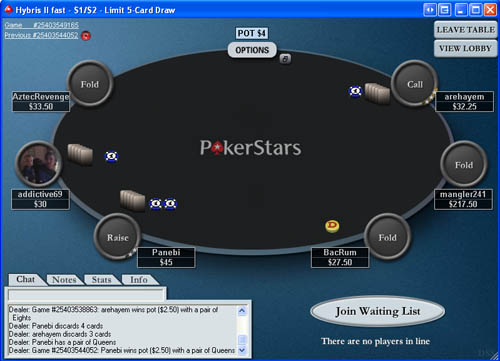 After everyone has been given their cards, the first round of betting can begin. The first betting round begins with the player sitting directly to the left of the big blind. Players have the option to call, raise, or fold their cards. The round will close when all players have either called the highest raise or folded.

After the first betting round, all the remaining players enter the draw phase. Players can select any number of cards in their hand to discard. The dealer will collect the discarded cards and replace them with new ones. The new replacement cards come from the top of the deck that was set aside after the first deal.

After the second round of betting, one of two things will happen. Either one player will remain, who will take the winnings, or there will be showdown. In showdown, the remaining player with the highest ranking hand will take the pot. 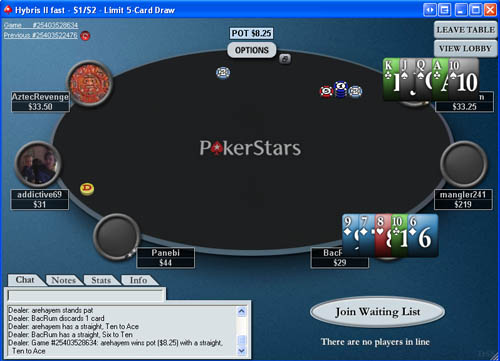 In the case that two players have a tie for the highest ranking hand in showdown, the pot will be split between the two players.

It is possible that the deck of unused cards, the stub, will run out. This means there are not enough remaining cards to replace every player’s discarded ones. In this case, all of the discarded cards will be reshuffled into a new stub.

You can find 5 Card Draw games offered at PokerStars!