Seven Card Stud Hi/Lo, often referred to as Seven Card Stud 8b (eight-or-better) is a game often included in mixed-game formats (as the “E”) including HOSE and HORSE. Seven Card Stud Hi/Lo is a split-pot game where half of the pot is awarded to the best five-card poker hand while the other half is given to the player with the best five-card low which must be an eight or lower. The nut-low hand is known as the wheel, A-2-3-4-5. As in most other split pot games the Ace can be used for either the high or low hand, or both.

In Seven Card Stud Hi/Lo each player is initially dealt three cards, with two face-down and the other, known as the “up card” dealt face up. The betting structure is similar to a normal seven-card stud game. The action starts with the “bring-in” bet by the player showing the lowest up-card. This bet is typically a fraction of the betting limits. For example, in a $10/$20 stud game the bring in could be $2-$3. Also, most stud games use an ante which helps to increase action. Each player must pay the ante before the start of the hand and it is typically 5% of the Big Bet. 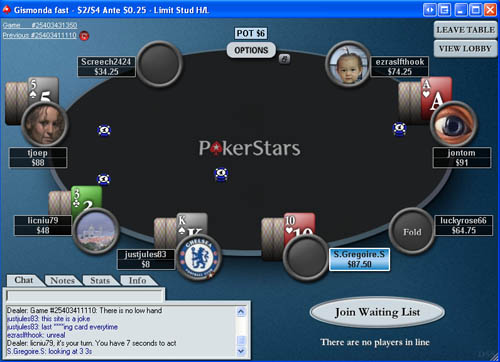 In a typical $10/$20 game the first three rounds use the small bet, or $10 and the subsequent two rounds use the big bet, or $20. Each betting round is capped after 3 raises or a total of 4 bets go into the pot. One interesting aspect of Stud games is when a player shows a pair on 4th street (when each player has 4 cards) he/she can choose between checking, betting $10, or betting $20.

With most pots being chopped the game has quite a low amount of variance. There are some instances where players “scoop”, or win the entire pot. This typically happens when no one makes a low or a player makes the wheel, giving them both a straight and the nut low. From time to time players will tie for the best high or low hand, which will cause someone to be “quartered”. When this happens players must split their half of the pot, while the player winning the other side gets their entire half.

For those unfamiliar with low-games the hand-rankings start from the highest low card in someone’s hand. Therefore 8-5-4-3-2 loses to 7-6-5-4-3. Also, flushes or straights do not count against a low as they might in other lowball games. 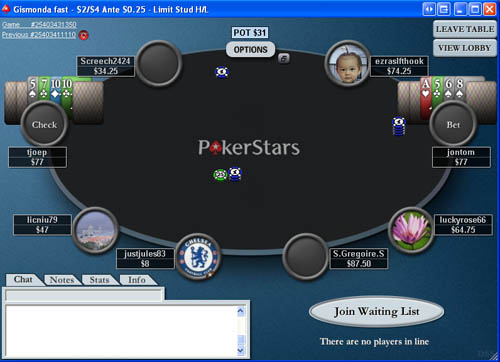 Finally, one of the most common questions about Seven Card Stud is what happens when the dealer runs outs of cards? First of all the tables are limited to 8 players, making this nearly impossible. However, if every player were to stay until the end the final round (7th street or river) would be dealt face-up in the middle of the table as a community card.