Here is a picture of a downswing. 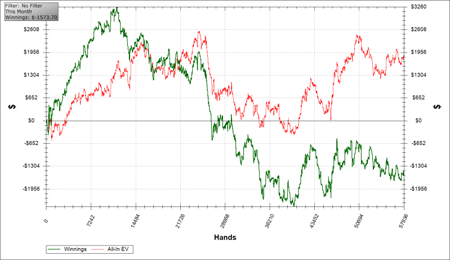 Notice the up, up and away start, followed by a tumbling down the mountain of cash you built up. Give me my god damn money, Sklansky.

Here’s the truth – Downswings are not real. They don’t exist. There is no such thing as “being on a downswing”. Every single hand, session, tournament and mark on your graph is completely independent from the last. You’re not in the middle of anything, you’re just playing the game.

I don’t mean that periods don’t exist where winning players lose money. Anyone who plays poker has felt the sickening feeling in their stomach when they just can’t win. And if you look back at your last 100,000 hands, you will see periods (hopefully not many) that could be labeled as downswings. But there is a clear distinction here – it’s in the past. You’re not downswingING, you WERE on a downswing. That has nothing to do with the next hand you’re dealt.

Just play the game, get your money in good, and pray to Yahweh you hold. There is no such thing as being on a roll, running hot, running bad, etc. If someone asks how you’re doing and you say “running red hot” what you actually mean is “I’ve been running red hot.” That could change any hand. Don’t mix the two up.

If you believe in downswings, I found a good way to get out of the funk. Let’s say you just had 5 losing sessions in a row halfway through the month. Everything you won the first 2 weeks is now gone and then some. You’re in the middle of a downswing. You need to shake the bad luck away.

What you need to do is find a quarter, stick with heads or tails, and flip it. This will gauge how bad or good you’re running. The trick is to stop flipping when you’re on an upswing. I usually stop when I get 5 in a row correct. This is because I know I’m running hot, after all 5 in a row is rare which signifies an upswing. And I want my hot streak to continue when I load up the tables, so it’s best to stop in the middle of it. If you try for more than 5 you might start going on another downswing and ruin the streak, rendering the whole process useless.

Or just stop bitching and play the fucking game.

Looking for more information on downswings? Check out the post you tilt too much and believe in downswings from FTR member Jason. #3 is spot on and is explained very well.

Let me know what your opinions are – leave a comment below!

(Thanks to FTR member badgers who submitted his graph!)