In last week’s edition, we looked at the absolute basics of how to use HU Nash equilibriums to determine proper play and exploitation against players in push/fold scenarios. I mentioned that once you get to the point that there are at least 10-12 big blinds effective stacks, playing a push/fold game isn’t necessarily the most effective way to play. This is especially true since a lot of people, even winning players, do not study these small stack scenarios with a non-shove pre-flop raise, and you can get the advantage through your superior preparation.

Let’s suppose that you go for a 2.5x raise pre-flop instead of a shove. You’re putting in another 2bb when the pot is 1.5bb, so if your opponent fold at least 57 percent of the time, then you’re taking down an immediate profit if you don’t massively screw up when he shoves or calls. What’s important to point out is that this means he has to play wider ranges than the Nash push/fold equilibrium which would have him folding about 61.5 percent of the time. Because players who are unfamiliar with these scenarios tend to fold a lot more than they should, they are extremely exploitable here. Likewise, you could open up your range a slight amount as well.

So if your opponent shoves over your raise, they’re betting 9bb to win 3.5bb, so the alpha value there would be about 72 percent. However, because Villain will always have post-flop equity, and usually a good bit of it, you’re going to need to fold a good bit less than that to avoid being exploited to a high level. On the other side of things, you’re going to need just 37.5 percent equity to call, so you’re going to be able to call with a lot of your range.

His non-folding range is going to consist of 3-betting and calls. People are going to tend to just want to shove over your hands because it’s easier and more familiar than trying to think through what’s going on with having a calling range. Along these lines, they’re going to tend to play in exploitable ways with folding too often and being transparent with their strategies, so you can take advantage of them to a large degree and often get a bigger advantage than what you would get by just playing the push/fold game from the SB to begin with.

So if you raise and he calls, you’re going to have a 5bb pot with 7.5bb left behind. The fact of the matter here is that you have 1.5 times the size of the pot, and that’s atypical. This gives you yet another chance to out-prepare your opponents.

There are two ways to approach this type of situation. The first is to just play a game based on using one bet which would mean shoving 7.5bb every single time you bet and assuming your opponent will be shoving 7.5bb everytime he or she bets. The alternative is to break it up into two bets, and this would allow for either a bet on two streets or a bet and a raise on one street.

As is the case with the pre-flop play, playing a push/fold game on the flops you see will be easier and require less thought, but playing along the lines of using two bets will give you more of an opportunity to out-prepare, out-manuever and out-play your opponents. However, if you want to really be prepared, you need to spend time learning both types of ways of approaching these post-flop scenarios because you might want to switch back and forth.

There’s a free tool that a lot of people do not know about, and it can really make life a lot easier when you’re trying to make general observations about what your hand is going to look like after the flop. If you go to the ProPokerTools simulator and check out the “Graph HvR” button, you can get a cool graph that will show how much equity your hand will flop against a range what percentage of the time. Make sure to read the syntax guide before you get started, because it’s different than most tools out there including PokerStove and Equilab.

For example, if you want to know how 87 suited does in general, you’d put “8x7x” into the first hand and “AA” into the second hand and press the button. It will take it a moment to do the calculation, and you’ll get an awesome graph that looks like this: 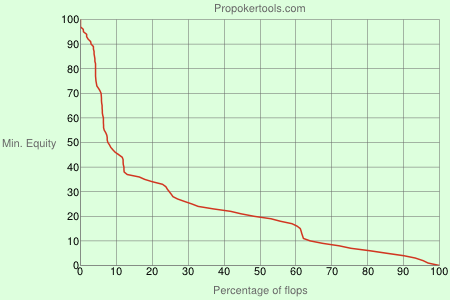 The point here is that you can decide that you’re going to be able to call a shove if you have, for example, at least 30 percent equity on the flop. You can see from this graph that you’ll have at least that much equity on about 25 percent of flops, so you can use that information however you need.

By breaking things down in the way that we have here and looking at the right EV calculations modeling how you expect your opponent to play, you can break down the entire game tree with a little bit of work and really become an extremely strong player in the process. A lot of people want to say that SNGs are dead, but there are still a lot of places where you can get an advantage over your opponents if you put in the effort.