Pot-Limit Omaha Hi is becoming one of the more popular card games around the world. Known as an action game, PLO is played at the highest of limits in card rooms such as Bobby’s Room in Las Vegas where typical blinds are $500/$1000. Pot-Limit Omaha is a high-hand only game in which each player is dealt four cards. As in Hold’em a flop, turn, and river is dealt with betting rounds in between each. Players must use two, and only two cards from their hand and three, and only three cards from the community board to make the best five card hand. 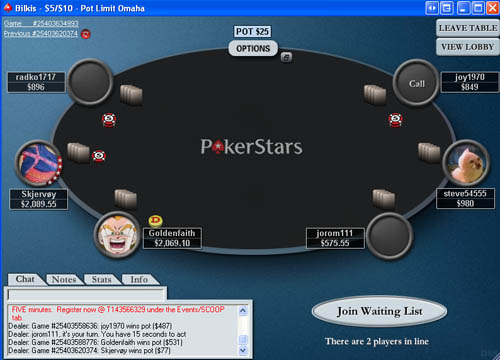 Pot-Limit’s betting structure is slightly different from No-Limit. As the name suggests players are only allowed to wager the size of the pot, which can create some confusion. In order to quickly calculate a pot-sized bet take the size of the pot, and double what it would take to call the previous bet.

For example, in a $10/$20 game a full pot-sized raise before the flop would be $70. This is because there is $30 in the pot, and $40 more after you call the BB and raise. One great advantage of online poker is that calculating the raise size is automatic. However, most dealers are extremely adept in this field and can make calculating the proper raises easy on live players. 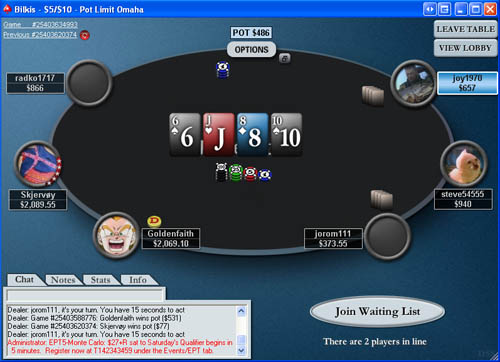 Some of the biggest errors beginning PLO players make is using too many of their hole or community cards. For example, a player holding AsTc9c8h does not have a flush when the board reads 6s8s2s3sAc. This player would merely have two-pair, Aces and Eights. This example also applies to straights, as players must use two cards from their hand and at most three from the board.

PLO is a tough game to learn and master, however, take solace in the fact that most other players are relatively new to the game as well.