Question About Heads Up? Ask The Steinbergs! 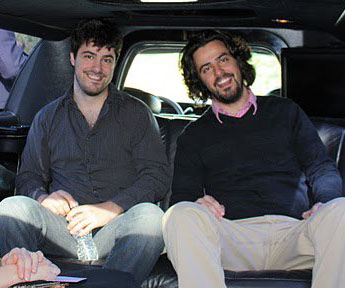 Danny and Max Steinberg in Vegas

Max and Danny Steinberg are probably the most successful identical twins in poker today, if not ever. They both have a slew of achievements and poker earnings under their name and have been playing poker professionally for the past 4 years.

Although the Steinbergs mainly play online, they are known for their live tournament accomplishments as well.  In 2008, Max finished 2nd for $144,773 in the LAPT Cost Rica main event.  He also was one away from an WSOP bracelet in 2010, finishing 2nd in event 8 for $352,916.  Most recently, Danny finished 6th in the WSOP Europe Main Event and earned $254,935 for his efforts.  He also has other cashes in the WSOP.

Recently, Max, who is known as Numbr2intheWorld and moderator of the heads up section on the FTR forums, posted a thread titled Ask me anything about headsup.  This is a great opportunity to learn from one of the top heads up players online today, so make sure to pick his brain!  Who knows how long this thread will last and be open for discussion, so make sure to act fast.

If you want to hear more from the Steinbergs, make sure to check out their blog at suited-aces.com!  They post all of their poker updates here, talk poker strategy, and discuss interesting hands.