Razz is a form of stud poker, also known as 7 Card Stud Low. The rules are very similar to that of 7 Card Stud. Players are dealt seven cards and use the best 5 to make the lowest possible hand. Opposite of the ever popular Texas Hold’em, the object of this game is to have the lowest ranking hand to claim the pot. Straights and flushes also do not count against the lowness of hands.

Before a game of Razz begins, all players pay up an ante based on the stakes of the game. Next, all players and dealt, one at a time, two cards that are face-down, the hole cards, and one face-up card. The player with the highest ranking visible card makes the Bring-in. This is a bet that is either half or the full amount of the small bet. For example, if it was a $1/$2 Razz game, the Bring-in would be either $0.50 or $1.00. A round of betting then begins, starting clockwise from the Bring-in. 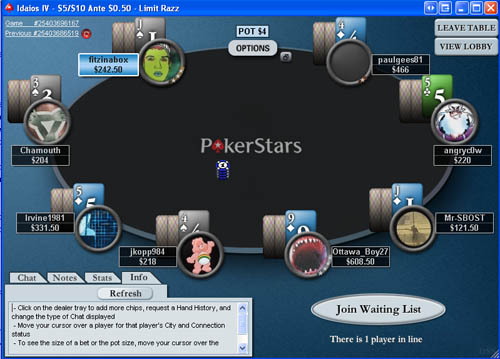 If there happens to be a tie for the highest ranking exposed card to determine the bring-in, suit is used to break the tie. Spades are the highest ranking, followed by hearts, then diamonds, then clubs. Also, it does not matter who the dealer is for Razz.

After this round of betting is complete, another face-up card, known as Fourth Street, is dealt. The two exposed cards are the stud cards. The player that has the lowest possible hand with the stud cards makes the first move. The player here may check or bet. Bets must equal the small bet. Going back to our example earlier, the bet for this round would then be $1.00.

Now the players receive a third face-up card. This one is called Fifth Street. The same rules apply in determining who is first to take action. The player with the smallest exposed hand starts the round by either checking or better. However, from now on, the bets must be in increments equal to the big bet. Back to the example, this means the bet for this round and all the next rounds would be $2.00. 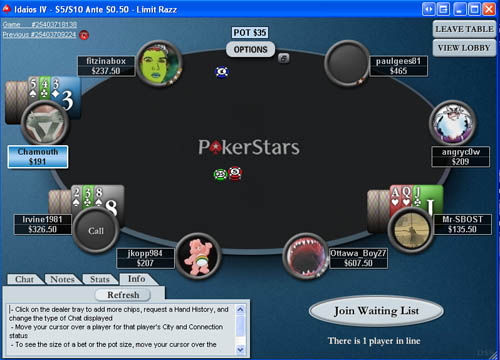 After this round of betting, players receive a fourth face-up card, called Sixth Street. Again, this round of poker begins and is played by the same rules determining how Fifth Street was played.

Next, players are dealt their final card, Seventh Street, but this one is face-down. Only the player knows the value of this card. The same rules also determine who makes the first move in this betting round – whoever has the lowest possible hand with the exposed cards.

Finally comes the showdown. Whoever shows their cards first is determined either by the last bettor or raiser, or, if there were no bets placed, whoever has the lowest exposed hand. The player that has the lowest ranking five card hand out of their seven gets the pot. In the even that two players have equal ranking hands, the pot will be split evenly between the two. Of course, if there is only one player remaining, they get the pot without having to show their hand.

You can find Razz games offered at PokerStars!