Mansion Poker offers a great rakeback program for its loyal players and provides incentive for its players to stay loyal. Unfortunately, these loyal players cannot include any from the United States. For each raked hand a player plays, the more Mansion Points they earn, and the bigger the rewards they can walk away with.

Mansion Poker DOES NOT offer or allow any kind of rakeback. However, players are rewarded with the Mansion Poker Club Mansion VIP program. As you play poker, you’ll accumulate Status Points, which will determine your tier in the Mansion Club. You’ll also get a variable amount of Mansion Points to exchange for rewards, and the amount of these points that you’ll get will increase the higher you achieve in the VIP scheme.

Eight levels make up Club Mansion: Player, Rookie, Hotshot, Club, Pro, Elite, Platinum, and Diamond. As players advance through the levels they earn point boosts, rewards, and freeroll entries. A certain monthly Status Point total must be achieved to qualify for each level of the Club Mansion program.

Player – Everyone at Mansion Poker begins at the Player level. It requires no set number of points and doesn’t offer a point boost. Since the rewards for this beginning level are so limited, it pays to earn the number of points required to climb up the ranks.

Rookie – Players must first earn 250 SPs to become a Rookie member. This entitles them to a 15% Mansion Points boost. Rookies also get access to weekly $150 and $1,000 freerolls. This is also the first level at which players may exchange their points in the Loyalty Shop. However, there are much higher rewards at the next few levels which should be more than enough motivation to put in the hands to move up.

Hotshot – Once a Club Mansion member has earned 1,000 points he/she will be moved up to the Hotshot level. Here players will earn a 30% boost on their Mansion Points making it easier to earn rewards in the Loyalty Shop. Hotshots get access to the $150 and $1,000 weekly freerolls.

Club Member – Club Members need to have 2,000 earned points. They get a point boost of 50%. Members of Club status are entitled to not only the point boost, but to loyalty scheme rewards, $1,000 weekly freerolls, a monthly $5,000 VIP freeroll, and the loyalty shop. In the loyalty scheme, players who have achieved Club Level for three straight months can get free 15,000 Mansion Points. By remaining at this level for six months, they can get all their Status Points during this timeframe multiplied by 1.75 and added to their accounts as Mansion Points.

Pro – Next is the Pro membership with a requirement of 8,000 points. From here on out, the rewards for each rank in Club Mansion are similar: points boost, loyalty scheme rewards, $1,000 weekly and $5,000 monthly freeroll entries, and loyalty shop access. The value of the points boost and loyalty scheme vary level by level. Pro Members receive a 150% point boost and can get 30,000 Mansion Points, through the loyalty scheme, for maintaining status for 3 months or a 2x multiplier on their SPs for staying Pro for six months.

Elite – Elite Members require 20,000 points, and with the standard rewards, offers a point boost of 250%. By using the loyalty scheme, they can get an extra 105,000 points as a reward for staying Elite for a period of three months. If they can achieve this feat for six months, they’ll instead receive a multiplier of 2.5 on all Status Points earned during the half-year period.

Platinum – To enter the Platinum Club status, a player must have a minimum of 50,000 earned Status Points. On top of the standard rewards, Platinums receive a 400% point boost. By staying at Platinum for three months, a player will get an extra 300,000 MPs from the loyalty scheme. Those who can keep grinding out Platinum status month after month for six months will see an extra 2.5x multiplier applied to the Status Points earned during that timeframe.

Diamond – The highest level in Club Mansion, players of this status must earn a total of 100,000 Status Points in a month. This earns them a point boost of 450% and a three-month loyalty scheme payout of 760,000 MPs. For those who can remain at Diamond level for six months, all Status Points will have an additional 3.0x multiplier applied to generate more Mansion Points. Diamonds also have access to the usual standard rewards.

Your status in the Mansion Poker Club Mansion program will depend upon the number of Status Points earned in the previous month. This will be updated on the first of each month.

You’ll earn 15 points per $1, 20 points per €1, and 24 points per £1 contributed in rake or paid in tournament fees. This number will be multiplied by the relevant factor to generate an amount of Mansion Points depending on your Club Mansion tier. It is these MPs that will be used to purchase rewards.

Mansion Poker rewards players at the Omaha cash game tables even more than usual. Omaha players will receive a base of 20 Status Points per USD, 25 points per EUR, and 30 points per GBP in rake contributed. These numbers will be multiplied as usual by the points boost applicable to a player’s Club Mansion tier. You’ll thus climb the ranks faster at Omaha and receive more rewards from your play than those grinding at other games, including No Limit Hold’em.

Players at dollar-denominated Omaha tables will achieve 33% greater returns on their play than normal. Omaha games running in euro will reward their players with 25% higher returns. Those playing Omaha using pounds sterling will also see their benefits automatically increase by 25%.

Beginning at Club level, players who can maintain their status for three or six months will receive a special Points Boost through the Mansion Poker Loyalty Scheme. Although it shares the same name as the normal, everyday point boosts are given to players based on their Club Mansion level. This is a special bonus that must be requested by the player.

You can claim a points boost for the lowest level that you achieved for three straight months. For example, if you tried to maintain Elite for three months, but you were able to only make Pro level in the last month, you can still claim the three-month boost at the Pro level. Everyone claiming a three-month Points Boost will receive a fixed number of Mansion Points added to their accounts depending on the level:

The six-month boosts work differently. All Status Points earned during the six previous months will be multiplied by a certain number depending on Club Mansion rank. This many Mansion Points will be added to the player’s account:

People who have achieved three months at one level and then another three months at a separate level will have some flexibility in how to proceed. They could claim the three-month Boosts for each separate level. On the other hand, they could claim the six-month multiplier-based Boost at the lower of the two levels. Mansion thus offers players the flexibility to be rewarded in the way that’s most beneficial. Once you calculate what type of loyalty scheme Points Boost you want applied to your account, you can email support@mansionpoker.com with your request, and they’ll get back to you within 72 hours.

Points can be redeemed in the Club Mansion Shop to purchase two types of rewards: instant cash and tournament tokens. If you have the discipline to keep from cashing in early, you’ll receive a better rate on your cash bonuses. See below for details: 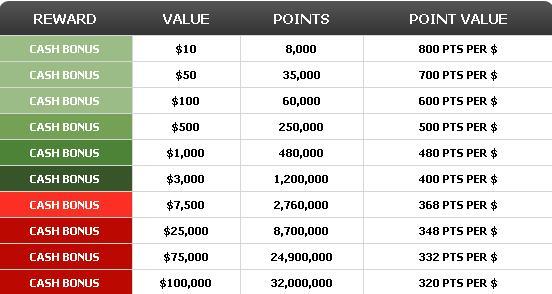 The tournament tokens offered are:

Your Mansion Points will expire if unused after 12 months. If your account is inactive for 6 months, they will also be forfeited. So use up your points to get some free cash rather than letting them sit idle!

Although it’s not technically possible to receive Mansion Poker rakeback, the Club Mansion program effectively is equal to a sliding percentage of rakeback that gets higher the more you grind.

When you first start as a Player in this VIP scheme, you won’t have any special freerolls, loyalty scheme points boosts, or loyalty shop options available to you. Therefore, your rewards will equal 0% valueback. However, you can start earning rewards merely by earning 250 Status Points (rake $16.67) to advance to Rookie Level. If you accumulate 8,000 Mansion Points at rookie level to purchase the $10 cash bonus, you will have paid $464 in rake, for an effective rakeback percentage of 2%. That’s not great, but it’s a start, and your returns will only increase as you climb the ranks.

At Diamond level, players will really see some excellent rewards. By maintaining their status for six months and taking advantage of the Loyalty Scheme Points Boost of 3x, Diamond players can effectively earn 127.5 MPs per dollar of rake they pay. The largest cash payout available, $100,000 for 32 million points, has a value of 320 points per dollar. This means that Diamond players can get back almost 40% of the rake they have generated! If the player in question plays at Omaha tables, he or she will benefit from the special point accumulation rate at those games. When we take this into account, Omaha cash game players at Diamond level can receive effective Mansion Poker rakeback of 53%! 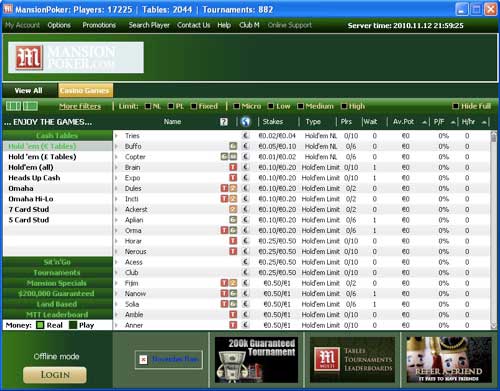 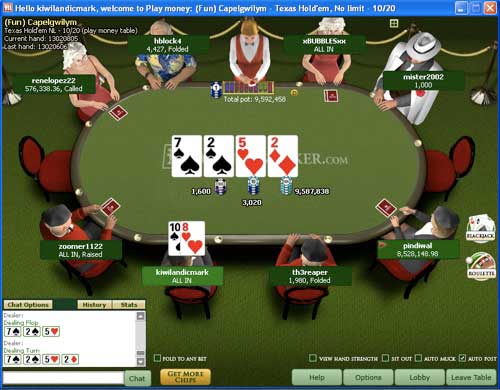