Party Poker is one of the world’s largest poker rooms. Consistently in the top 10 in site traffic, Party Poker is a well-respected operator in the world of online gambling. In the past, Party Poker’s Loyalty Program had been significantly lacking compared to other big sites such as PokerStars or FullTilt, but this has changed somewhat. Party Poker revamped its Loyalty Program on March 1, 2015 to make it easier to advance through the levels.

While Party Poker does NOT offer “rakeback” per se, it now offers quite a nice equivalent. Much like PokerStars’ VIP Program, the Party Poker Loyalty Program is a ladder-system that offers bigger prizes to their more loyal (and higher rake-paying) customers.

There are four tiers in the Party Poker VIP Program: Bronze, Silver, Gold, and Palladium. Your position in the program is based upon the accrual of Party Points during each month of play, and each level has access to different cash and tournament ticket options in the points store.

Once you earn enough points within a given month to move up to a higher level, you’ll be instantly granted access to the rewards that pertain to that level. Furthermore, your new status will carry over until the end of the next month. If you fail to earn the requisite number of points by the end of the month, your status will be reevaluated and lowered.

At PartyPoker, you’ll get a poker point for every $0.50 in rake you pay or tournament fees you fork over. Additionally, you can earn more points by playing bingo or casino games or by betting on sports in the attached gambling offerings. Check out PartyPoker’s website for more information on ways to earn points besides at the poker tables.

There are tournament tickets available in the points store, but most serious poker players will prefer to buy one of the cash options.

This chart details the rewards that are available – including their Party Poker rakeback percentages – depending on your level in the Party Poker Loyalty Program:

Every week, players will be able to test their mettle against others of their Loyalty Program level by entering a special tournament that requires points to buy in. Each tournament takes place Saturday at 6pm CET. The details of the events are as follows:

As we’ve mentioned before, there’s no direct PartyPoker rakeback on offer. Instead players can receive cash and tickets through the PartyPoker Loyalty Program, which acts as effective rakeback. At the lowest level of the scheme, Bronze, players aren’t able to trade their points in for anything but freeroll entries, so their effective value back percentage from the points store is 0. But by raking $25 in a month to get to Silver level, they can gain 4% of their rake back in the form of tournament tickets. At Gold status (rake $375 in a month), players can receive 10% back from instant cash awards or 13.33% from tickets. Players at the highest level, Palladium, get to take advantage of 22.22% valueback in the form of cash. Although the Loyalty Program tops out rather quickly and doesn’t return as much value as the highest VIP levels at many other online poker sites, you can achieve Palladium by raking as little as $1,000 in a month. This means that earning the highest rewards at PartyPoker isn’t as hard as at many of its competitors. 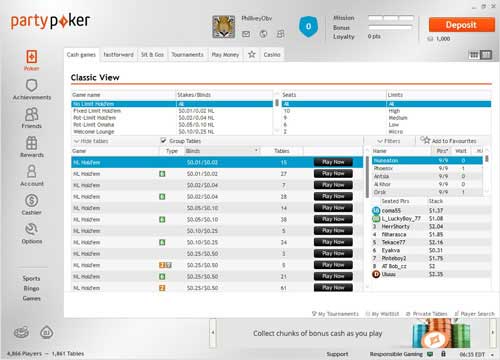 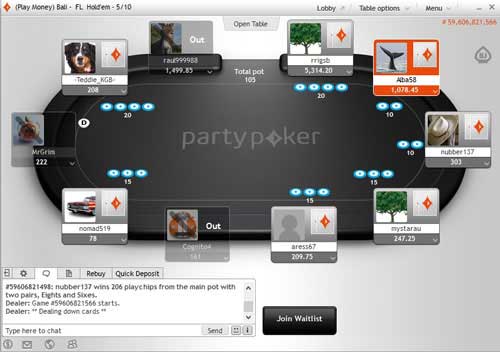