You can play Zoom Poker on the main PokerStars.com client. Use any of the links on this page to be taken to PokerStars. Or you can start the PokerStars download right from this page.

What is Zoom Poker?

About two years ago, it was Full Tilt Poker that launched one of the most monumental innovations to poker in recent history: Rush Poker. Since then, PokerStars has developed their own version of speedy action-packed poker, which they named Zoom Poker.

The concept is simple, but the effect is enormous. Basically, players never have to wait at a table where they have already decided to fold. Zoom Poker places you in a large player pool, so that the second you press Fast Fold, you will be whisked away to a new table of opponents. The software will automatically fold your old hand in turn as seen by your opponents at the previous table, so no one can see when a player has folded out of turn. 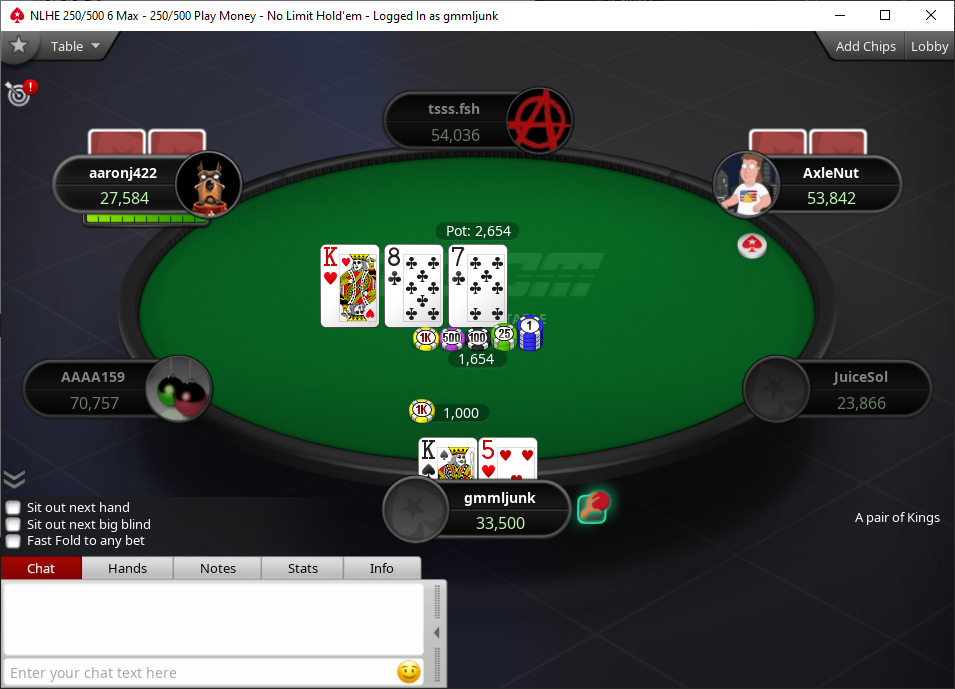 Zoom Poker is available in both cash games and tournaments (SNG and MTT), on all PC and Mac clients, and on the PokerStars mobile app.

How Does it Work?

When you press Fast Fold, Lee Jones swoops down from the heavens, re-shuffles the deck, and drops you at a table with a new hand and 8 new players from the pool. Seriously.

Instead of sitting at a table with just 8 other players, you are entered into a pool of hundreds or thousands of players playing the same game and stakes. When you join the pool, you will be randomly seated and dealt in immediately, usually in the big blind. If at any point you don’t want to play the hand, say you’re dealt 72 off suit on the button, just press Fast Fold and you will be randomly seated at a new table with different players from the pool. Because PokerStars is so smart, they also keep track of blinds. The blinds are assigned based on who has had the big blind least often.

Because there is a large player pool, there are many people pressing fold at once, all of which are randomly seated at a new table, over and over and over until the end of time.

This gaming style is a blast for recreational players who want action, who hate staring at unplayable cards and whose least favorite part of the game is waiting for other players to finish out a hand so they can be dealt in again.

Hands hands hands. The key to making money in poker is to play more hands. Poker is a long term game so anyone can have be a big winner or loser over a small sample like 1,000 hands. The true winners of the game come out at 100,000+ hands. Zoom Poker allows you to play more hands over the same period of time. How much faster? Let’s look at an example.

Zoom Poker also enables players to jump in on cash game action immediately. There are no waiting lists, no waiting for the Big Blind and no searching for tables to join! Simply open the Zoom Poker lobby for the stakes and game type you want and jump into the player pool.

PokerStars’ Zoom Poker isn’t for everyone. Players whose style relies heavily on table dynamics and opponent reads are concerned that only seeing players—even regulars—once every several hands makes for an ABC game-play. In other words, many believe that some nuances of the game are compromised so that players are just playing the strength of their hands instead of playing their opponents in a strategic chess match.

Interestingly, these games had an almost opposite effect in the early Rush Poker days. Play style actually got extremely aggressive at many stakes as players took advantage of the guise of read-less play.

Watch that fast fold button! Mis-clicks are possible no matter what game you play, but if you’re dealt AA on the button and accidentally click fast fold, say goodbye to those rockets.

It may seem that this debate is moot if players who don’t like Zoom Poker simply avoid Zoom Poker, but the ripple effect is a bit more complicated than that. Since a game with constant, seamless action for every player is such a big draw for recreational players, regulars are concerned that games within their own comfort zone will thin out. Essentially, they’ll either have to adapt to the new game or adapt to the new playing environment in the regular ring games.

Points are earned at the same number per hand/rake contribution. But due to the huge increase in the hands played per hour, players will see a much higher amount of FPPs and VPPs earned per hour.

So basically, you earn FPPs/VPPs at the same rate, but because you are seeing more hands per hour, you will collect them faster. So yes, you will earn more points per hour by playing Zoom.

The differences between Zoom Poker and regular cash games means that you’ll likely have to adjust your play slightly in order to keep up. Because players can simply quick fold and move onto a new hand right away, you’ll notice that virtually all players are now playing quite tightly, especially from early position. Below we’ll examine some consequences of this major change, as well as how to counter and profit from it.

1) Opponents generally play much tighter. Tighter play means that your opponents are only playing stronger hands pre-flop, and are avoiding more troublesome spots, especially in early position. A typical Zoom player’s early position range will be VERY tight. They will be folding virtually all of their marginal hands such as Ace-Ten off-suit and suited connectors from these early positions. Thus, an under the gun or very early position raise should be given a lot of respect.

2) Pre-flop re-raises should be viewed with more strength. At regular tables Tight-Aggressive and Loose-Aggressive players will sometimes 3bet (re-raise) with somewhat weak hands because others are raising a wider and weaker range. However, in Zoom poker where players are raising more tightly, they cannot afford to re-raise as a bluff or on a weaker hand because the likelihood of running into a huge hand (JJ+/AK) is so much higher. Do not continue in a hand where you get re-raised preflop and do not have a solid hand or good post flop odds to crack their big hand- such as with a small pair hitting a set or a speculative hand like 76 suited hitting a big draw.

3) Be less stubborn about defending your blinds. Players will still try to steal the blinds from late position fairly frequently, but you should be less willing to defend your blinds. Defending your blinds from out of position without a solid hand is marginal at best. You can stay out of a lot of trouble if you simply let your mediocre hands in the blinds go. Fold and move onto the next hand to find a more profitable situation.

4) From late position, steal the blinds about as much as you would in a regular game, or even more often. Because players are playing much tighter and avoiding tough spots, you can make them fold their blinds more often than you would be able to normally.

5) While reads are not as important in Zoom Poker, you can still benefit from simple notes such as “loose.” “tight” and “aggressive” on your opponents. You may not play many hands against them, but it is still very useful to know their tendencies once you are in a big pot with them.

6) Play cautiously after the flop unless you hit a huge hand. Because players are folding most of their marginal hands, when they do connect with the flop and keep betting, they’ll have a stronger hand on average. Be willing to let pretty good hands go in the face of strong betting, especially when facing a passive player who is betting like they have a superb hand.

It’s Not That Much Different

Don’t be turned off if it seems like a whole new game of poker, because it’s basically the same game you’ve always loved, just faster.

Other than the player pool and constantly changing tables/opponents, Zoom Poker is essentially the same as other online poker cash games. You’re able to take notes, auto-top up your stack and tables will have similar minimum/maximum buy-in amounts.

Players still take turns posting their fair share of blinds. PokerStars uses the most distributive method available to determine who needs to post the SB and BB. Every player playing a first hand is automatically the Big Blind, and if there are no new players at the table, the player to have gone the longest without paying the BB has to pay up.

PokerStars also allows you to keep up with the action of past hands by looking in the Hand History window, just like at a normal table. Action that happened after you folded and left the table will be recorded there for you to see at your convenience. You’ll be able to look back and see if you might have won the hand, to make sure that your borderline hand missed the flop or to see if there was any big action after you folded.

In our opinion, Zoom Poker rocks. It’s win-win for PokerStars and the player. PokerStars earns more rake per hour and players see more hands per hour. But that’s just it, it’s up to you. There are still thousands of players at the regular tables, so you’re not forced to play Zoom. However faster is the trend, and you have to follow trends because that is where the fish are.

In an industry where change and innovation is key, the PokerStars “Adapt or die” motto is what maintains their world leader status among online poker sites. Given the popularity and success of Zoom Poker, it seems likely that it will be around for some time.

– Zoom Poker is available on PC, Mac or the PokerStars mobile app. (For Apple and Android devices)
– Zoom Poker deals you into a player pool with hundreds of other players instead of just one table.
– By pressing Fast Fold you will be instantly moved to a new table with a new group of players.
– Pressing CTRL while you fold allows you to see the end of the hand.
– You can see 300+ hands per hour, per table.
– Playing Zoom earns more VPPs/FPPs per hour since you see more hands.
– You can play up to 4 tables per player pool.
– It’s possible to play more than 4 tables, just join a different pool.
– Strategy changes and reads become less important. (But still helps to take notes!)
– Overall the game is the same, but you just see more hands in the same amount of time.

So now you know what Zoom is and you’re itching to play. If you’ve yet to create an account and make a deposit, PokerStars gives all new players a bonus of £20 free on their first deposit. You can use the cash bonus on the Zoom tables! Just make sure to use the bonus code TWENTY when making your deposit.

If you don’t already have a PokerStars account, click here to visit PokerStars.com to create one or download the official PokerStars software directly from FTR to save some time. When prompted, enter the Marketing Code FlopTurnRiver. 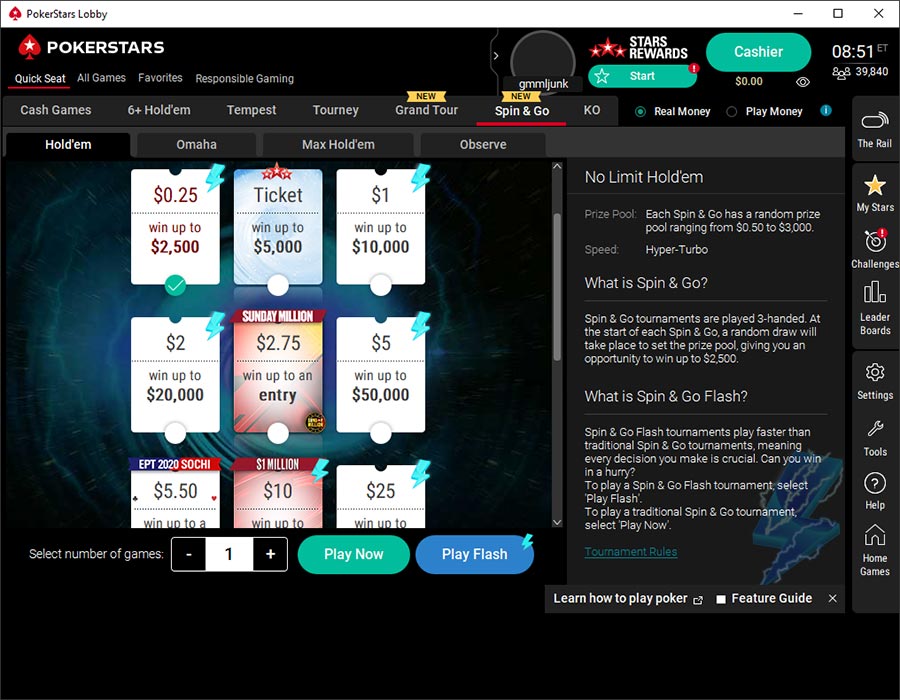 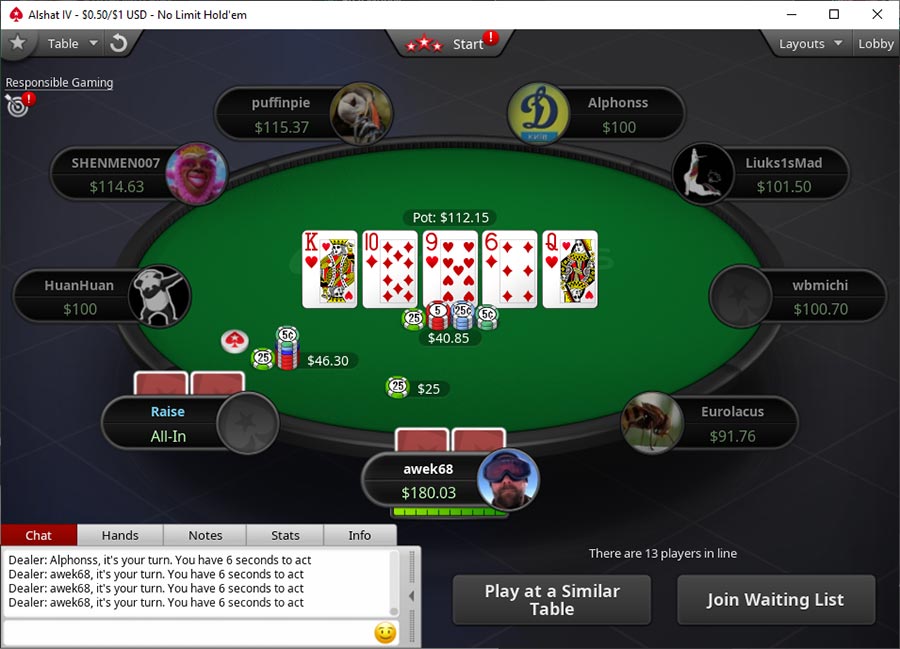