William Hill is one of the most well-respected bookmakers in the United Kingdom. It has been in continuous operation since 1934 in the brick-and-mortar arena and has grown since that time and expanded its operations with the introduction of online products. Among the offerings at William Hill is an online poker site on the iPoker network, one of the largest Internet poker providers with a healthy player pool and lots of game variety.

As you would expect from such an established operation, William Hill knows how to treat its customers right, including poker players. With the William Hill Poker Players Club, players can receive cold, hard cash, bonuses, and tournament tokens.

William Hill Poker DOES NOT OFFER RAKEBACK, but because the Players Club returns regular rewards based upon your volume of play, it acts in lieu of rakeback and benefits you similarly to how rakeback would.

Based upon the number of WHPoints (WHPs) you can accumulate during a month, you’ll be assigned a position in the Players Club. The levels are named ClubStatus1 through ClubStatus7. The major difference between the different tiers is the Club Status Multiplier, which will grant you a certain number of Club Points (CP) for every WHPoint you earn.

Here’s a chart detailing how many WHPs you need for each William Hill Poker Players Club level and the Club Status Multiplier applicable to that level:

As you earn WHPoints throughout a single month, you’ll automatically advance, within the minute, when you hit the points target for the next level in the Club. Your status will be active for the remainder of the current month and will be valid until the end of the next month. If you fail to earn the required number of points to maintain your status, you will be downgraded on the first of the subsequent month.

As you play ring games and tournaments, you’ll start to accrue WHPs automatically. For every €1 you pay in rake and tournament fees, you get 10 WHPoints. If you enjoy the GBP-denominated games, then you’ll receive 14 WHPoints for every £1 you pay.

William Hill Poker uses the weighted contributed method of rake calculation for ring games. This means that the amount of rake you generate is reckoned according to the amount you contribute to each raked pot. If you fold preflop without having posted a blind, then you’ll get 0 points for that pot. If however, you go all the way to showdown in a big, all-in pot that reaches the rake cap, you’ll receive a large rake attribution and thus many points. Most hands will fall somewhere between these two extremes.

All of the above is modified by the iPoker Network’s Real Player Value calculations. This means that net depositing players get a boost to the amount of rake they’ve generated while savvy sharks will be the total rake they’re attributed decrease. This is an attempt to be fair by rewarding those users who actually make deposits and put new money into the ecosystem. If you’re a professional player, you might see a slightly lesser rate of WHPoints earning than you might expect.

As you earn WHPoints, you will also receive Club Points. The number of Club Points you get for each WHP will be determined by your Club Status Multiplier. New players will receive only 1 CP per WHP, but ClubStatus7 grinders will see their Club Points balance increase by 2 every time they accrue another WHPoint. Check out the chart above for more details about the multipliers in effect at various tiers in the William Hill Poker Players Club program.

There are two types of rewards available at the William Hill Poker Points Converter: cash and tourney tokens. Each reward costs a stated number of Club Points. Below, we’ve presented all the relevant information on every choice available.


From the chart above, you can see that you can get a superior rate of points conversion by saving up your points until you can purchase one of the larger cash payments. The €2,500 option in fact offers one-third more money per point as the lowest €10 cash award.

The tournament tokens offer rates similar to, but a bit better than, the instant cash exchanges of similar sizes. They will expire after 30 days if unused.

All things considered, the tourney tokens are the best deal if you don’t mind playing MTTs. However, if you play enough poker to be able to afford any of the instant cash exchanges of €500 or more, then they’re the best option because they deliver a rate of value that beats anything on the tournament entry side. Remember to use your Club Points within 12 months of earning them, or they will expire.

William Hill Poker offers special tournaments to its Players Club Members. Each of these tournies runs at 8 pm GMT. They’re held in all-in format, meaning that you won’t have to actually play out your hands because everyone will be all-in on every hand until the freeroll completes. The schedule is as follows:

The ClubStatus2 FR runs every day and is open to players with ClubStatus2 and higher. It pays out €26 in SnG Ladder tickets.

The ClubStatus3 FR takes place every day, and players of ClubStatus3 and up can play. It distributes €50 in SnG Ladder tickets.

TheClubStatus4 FR occurs on the last Sunday of each month and rewards those of ClubStatus4 and higher. The prize pool is €500 cash.

In addition, there are various tournaments and sit and gos at William Hill that accept CPs as the buyin and award cash, tournament tokens, or even more CPs as prizes.

Poker players at William Hill have the opportunity to get €0.50 in cash every Monday for every 50 WHPoints they earned in the previous week, up to a maximum of €5. Players’ accounts will be debited a corresponding number of Club Points.

At the lowest Players Club level, this Monday’s Cashback payment offers a significantly better value than any of the options available in the Club Points Converter. However, players with a higher multiplier factor may find that these trivial payments cost too many Club Points. Fortunately, players must opt into this promotion to activate it, so those who wish to avoid it can easily do so.

Despite the fact that the rewards at William Hill are not equal to a set percentage of the rake you’ve paid, the Players Club offers the next best thing to William Hill Poker rakeback. The higher you climb in the ranks, the more Club Points you’ll get per dollar raked and the greater your cashback percentage will be.

At the lowest rungs of the VIP ladder, the Monday’s Cashback payment offers the best value. You’ll get 10% of your rake paid back to you every week as long as you don’t rake more than €50 (500 WHPoints) every week.

If you can make it to ClubStatus3 by earning 200 WHPs in a month (raking €20), you’ll have the opportunity yo surpass the benefits of Monday’s Cashback by exchanging your points for other rewards. The €10 bonus for 1,000 CPs should be feasible after saving your points for a few months. You must rake €91 to gather enough Club Points, for a cashback rate of around 11%. You can instead get a €10 tourney token for just 950 points, earning about 11.5% effective rakeback.

At ClubStatus7, with the 2x multiplier active and the largest rewards within reach after several months of dedicated play, your cashback percentage can truly be great. You’ll be able to earn the 187,500 CPs needed for the €2,500 cash payment by raking about €9,375, giving you about 27% cashback. If you elect to instead take €50 tournament entries, you’ll achieve valueback of about 25%. It really pays to climb the ranks so that you can obtain the best possible William Hill Poker rakeback equivalent. 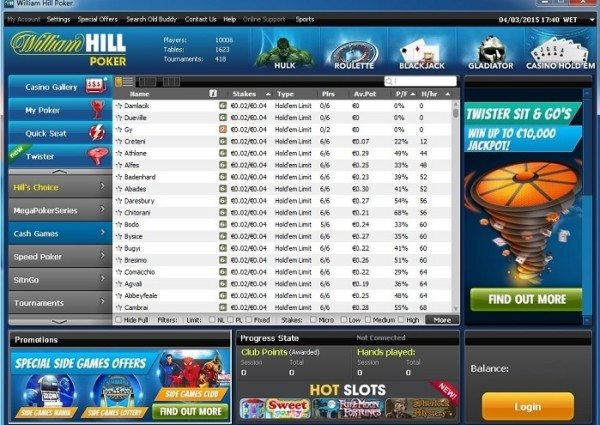 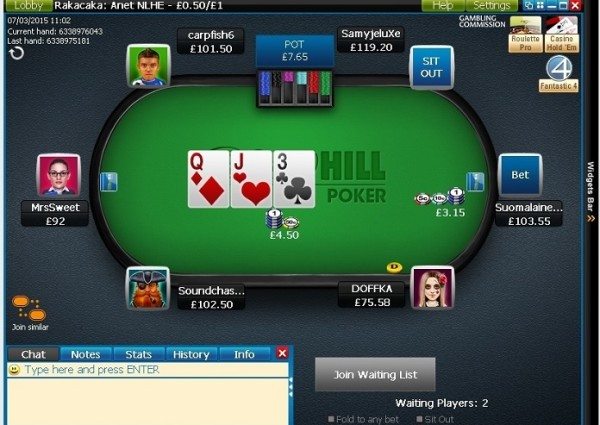