Breaking Down the 2011 WSOP November Nine

The final table of the 2011 World Series of Poker Main Event was set last night.  A field of more than 6,500 players was whittled down to just nine players over more than a week of action from the Rio Casino and Resort in Las Vegas, Nevada.  The Main Event, which is considered the toughest poker tournament to win in the world, will payout $8,700,000 to the winner.  Ever since Chris Moneymaker won the Main Event in 2003 the $10,000 championship has become a mainstay in mainstream media.  Sports channels around the world have picked up the series including juggernaut ESPN who aired the Main Event live this year.

Back in 2009, with the WSOP and ESPN looking to capitalize on its popularity, the two decided to delay the playing of the final table some four months in order to drum up excitement.  The final table, coined the “November Nine”, benefited last year from the presence of Phil Ivey.  This year there are nine new players looking for WSOP glory.  Amongst them are some of the world’s best tournament players as well as competitors who were virtually unknown entering the Main Event.  Let’s take a look  at the final table participants and their chip counts: 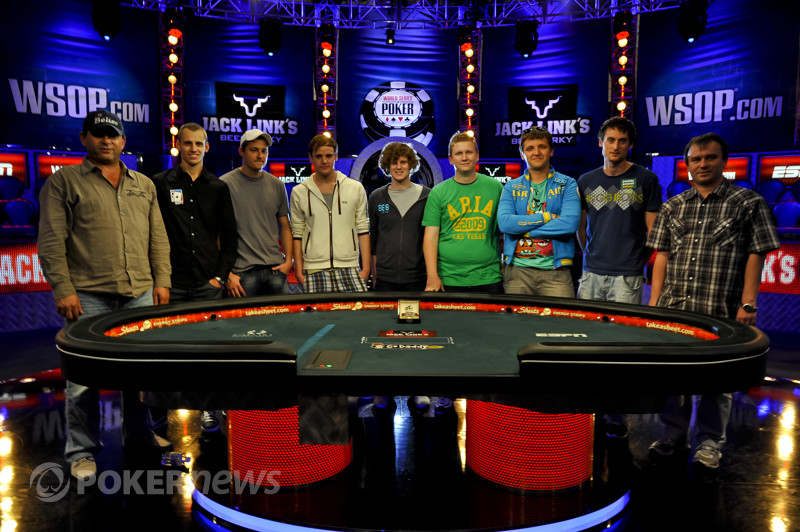 Chipleader Martin Staszko is certainly one of the more inexperienced players at the final table.  He has played very few live poker tournaments but does consider himself a professional online poker player.  The 35 year old hails from the Czech Republic where he nearly final tabled a $1,500 event at the Prague Unibet Open last year for just over $10,000.  His biggest cash came earlier in 2010 where he made a deep run in the $5k EPT Deauville before busting in 11th place for $49,547.  Staszko is the first player from the Czech Republic to ever make it to the WSOP November Nine.

Entering the final table approximately t6,000,000 behind Staszko is Irishman Eoghan O’dea.  Currently in second place, O’dea will probably be considered one of the favorites once play resumes in November.  He has had two big scores in the past, both for more than a quarter million dollars.  In 2008 O’dea broke through with a $260,000 score for his runner-up finish in the Poker Million VII hosted by Sky Sports.  He again finished 2nd in a major event in 2009 where he earned $388,532 in the WPT Marrakech Main Event. O’dea is probably hoping he doesn’t repeat those runner-up finishes in November although a $5,430,928 payday is nothing to sneeze at.

A trio of Americans make up those in 3rd, 4th, and 5th place.  In third place is Matt Giannetti, a high-stakes cash game professional who calls Las Vegas home.  While he is typically busy beating cash games in Vegas, he has taken time over the years to enter many WSOP events.  His first WSOP final table game was in 2008 when he finished 5th in the $1,500 Shootout for $40,267. Just a year later Giannetti made the final table of the $1,500 Pot-Limit Omaha event before busting in 4th place for $66,544.

Giannetti holds a small lead over fellow-American Phil “USCphildo” Collins who is perhaps the most decorated player in the field.  Collins has been crushing high-stakes online tournaments for years and has more than $3,000,000 in cashes on PokerStars and FullTilt alone.  While Collins has found great success on the online felt, he has yet to break through in live tournaments.  He has a few small WSOP cashes including a 10th place finish in the 2009 $1,500 Pot-Limit Hold’em event for $13,332.  Collins is sitting in a great spot heading into the November Nine with a strong chip-stack and the knowledge of what it takes to win a major final table.

Rounding out the American trio is another strong young player in Ben Lamb. Another player based out of Las Vegas, Lamb is no stranger to the live tournament scene.  In fact he made waves earlier in the 2011 series when he won the $10,000 PLO Championship for $814,436 and followed that up by making the final table of the $50,000 Player’s Championship.  However, it is online where Lamb first made a name for himself.   Lamb has won a few majors online including both a FTOPS and SCOOP event as well as the Sunday500 on PokerStars.  Lamb will certainly be a force to be reckoned with once play resumes as he sits in a good position with more than 20,000,000 in chips.

The oldest player at the final table is 49 year old Badih Bounahra.  With online players surrounding him, this competitor who plays exclusively live might have a decided advantage in reading his opponents.  Bounahra, who is from Belize, sits just behind Lamb in 6th place with 19,700,000 in chips.

The final table is rounded out by three short stacks in young gun Pius Heinz, Ukrainian Anton Makievskyi, and ultimate short-stack Samuel Holden.  All three players will have to make an early move to get back into the tournament.  However, even the first player to bust at the final table will take home $782,115 in prize money which should alleviate some of the nervousness over the next four months.

Be sure to stay tuned to FlopTurnRiver between now and the final table for any and all updates on the remaining participants of the November Nine.