Game 2 of the Gauntlet VII was much anticipated. This was mainly due to the fact that is was the first ever shorthanded tournament in the history of the Gauntlet! I predicted game 2 to be a 6-Max, action filled, donkfest; and boy was I right. If you are unsure what the Gauntlet is, check out the end of this article for information on how to register. You can play against FTR’s biggest players, for free!

Before we get into the action, let’s have a look at the current leaderboard. There is only 1 week played so far, so it isn’t anything too exciting:

If you read last weeks summary, or donked around in the action, you already knew nutsinho (nuts in ho, not nut seen ho – I don’t care what he says) took down game 1, defeating givememyleg heads up. Let’s see if he could defend his current 1st place position in game 2!

For those that haven’t seen the thread, there is also a $50 sidebet on who does best this Gauntlet. So far there are 8 people in (givememyleg, drmcboy, wildbob, shifubowa, kmind, bigspenda, warpe and spinswell). If you haven’t played a Gauntlet game yet, there’s still 30 games remaining, which is more than enough to get in! If you are looking for details on how you can get involved, see the thread by clicking here.

It is clear that 6Max is a complete different breed than full ring, because everyone came out swinging. In total, 30 people registered which was 10 less than game 1 on Sunday but still had a very nice turnout. FTR vet’s that were making their season 7 debut included bigspenda73, swiggidy, Warpe, pocketfours, Galapogos, bode, GatorJH, kmind, Santa Cruz, redzilla and the man who makes it all possible, Xianti. There was another $10 prize this week if your AA was cracked, but sadly no bounty.

Action started with 6 tables, and there was an obscene amount of 3bets within the first few hands. Early on table 2, givememyleg and Galapogos (PokerStars I_Lie_2_U) battled it out, with Gala getting the upper hand:

That was only the second hand in, and later he claimed to have had 99. Just to give a peak and what was going on at the tables, let’s check out a few hands:

It was hard to follow all of the action, simply because there was so much of it. I knew it wouldn’t be long before we had our first elimination, and 11 minutes in there was the first clash:

Good job Warpe! He hit a pretty big cooler with TPTK v set and was out 30/30. I had to make sure to let him know I was very happy about his elimination, then all of a sudden karma hit me:

I’m not very happy about this hand, but I said “screw this I don’t want to be left with 600 chips” and missed my 18 outer on the river. Warpe also had to needle me for finishing 29/30; still better than him! Shortly after my bust, it seemed my table was the craziest, as we had another all-in and call:

No goot indeed, and badgers was done in 28th. As the tables were adjusted, the players shifted around, and at table 5 you would find swiggidy and bigspenda. You just knew there would be a lot of leveling going on here, and they played their fair share of pots together:

Swiggidy won that battle, and soon found himself with a chip factory in his pocket:

Dozer’s (ge00) terrible preflop call ended his day in 26th. Back to the crazy table, bode picked up a pair, but unfortunately was dominated by Gauntlet rookie FeltOnTable’s higher pair:

Did I say unfortunately? Felt took a bad beat and was out in 25th. It was only 22 minutes in, and there were already 6 eliminations leaving 24 people remaining across 4 tables. I’m just including the below hand because Wildbob really wanted to be mentioned:

Pretty sick cooler getting it in with AKs and being a 7:1 dog! Meanwhile, GatorJH was running into problems all over the place, and eventually got all his chips in racing for his tournament life:

But he can flip coins well and “wheeeee’d” himself to a double up. A few hands later and kmind (toddanderson) found himself in a heap of trouble:

Kmind said he was calling on any non A or K river, and later jasons0147 showed that he did in fact have him beat with QKs. But it didn’t stop there:

In 2 hands, kmind was BUSTO! Speaking of busto, it is what spenda became when his boyfriend swiggidy got the best of him again:

Spenda missed his huge draw and was out in 23rd. It is pretty rare when Xianti signs up for a game, but too bad for him because he never could get anything going, and eventually shoved right into a monster:

There hadn’t been much noise so far from game 1 winner nutsinho, other than the occasional 3bet, but he finally played a pot against bode who got a bit out of line:

And just like that, nutsinho was again the chip leader. Everything was going right for him, that is until he picked up AKs against pocketfours (thisnickfree):

The classic clash of AKs v QQ switched their positions and now pocketfours was the current chip leader. Down to 4 tables and the blinds hitting 50/100 meant for a lot of raising and re-shoving, that is except for the nits of table 4 (GatorJH, jasons0147, Galapogos, fimanoid, and ackthecat) who were folding what seemed like every hand. However, it just could have been because the other 3 tables were insane.

Moving to table 3, seat 2 was the hot seat. Luckily for reDZill4, that is where he was located. In back to back hands, he served up 2 eliminations:

Just like that reDZill4 was now the chip leader. Speaking of back to back, ackthecat would also run two back to back hands where she would double up both times:

Aces were all over the place! The past 5 minutes were nuts, and 5 had dropped during that time frame. We were now down to 12 of the starting 30 and hadn’t even hit the first break yet. With fairly deep stacks, there was room for some postflop play, and even a little click it back action from swiggidy:

Unfortunately for her, she was dominated and finished in 12th place. This hand gave swiggidy a huge chip lead with 11 left. Speaking of all-ins, reDZill4 always seemed to find himself in the middle of the action:

But BOOM the king on the river doubled up GatorJH, keeping him alive. Back to game 1 winner, nutsinho, he was on a roller coaster ride and eventually got all his chips in again:

There would be no repeat tonight, and nutsinho was out in 10th place. We’ve all heard “a chip and a chair” way too much, but this is literally what rediak would be faced with when an all-in left him with just one chip:

Could he make the insane comeback from one chip?

Nope, and he was next to bust. Blinds had gone up to 100/200, and the players were on the final table bubble with 7 remaining. It was pretty tough being 3 and 4 handed, but eventually pocketfours would send the final casualty out:

Gametight (sucout) was your final table bubble boy, and we now had the final table set! Here were the stacks as they got started:

In just 2 hands, we were about to see the biggest pot so far of the tournament:

Swiggidy and GatorJH flopped positions and swig will eventually realize that TT was his cursed hand on the night. Meanwhile, the 2 other big stacks would play some pots together, with redZill4 getting the better of pocketfours:

Just on orbit after swiggidy doubled up Gator, he again found himself on the button, with TT:

And again it ran into a bigger pair. Swiggidy was now the short stack, and a few hands later push with, what else, TT:

In a bad turn of events, swiggidy exited in 6th place after starting as the final table chip leader. Not long after, reDZill4 would slow play a hand, and would end up paying off big time:

That ended the tournament for Galapogos in 4th place and the players were now on the bubble. However, this would not tone down the aggression at all, and we saw a huge preflop pot between Gator and pocketfours:

What a sick call! I don’t know how he did it, he must be a soul reader. This left pocketfours with just 220 chips, and he got it all-in the very next hand. However, it wasn’t going to be easy as the chips flew between Gator and red:

Pokcetfours was out n 4th place and the remaining 3 were in the money. Here is how the chip stacks looked as 3 way began:

Red had nearly half the chips in play, but blinds were only 125/250/25, so everyone was still very deep. 3 way was exactly what I expected, lots of back and forth pots:

That is until redZill4 decided to kick it up a notch (BAM!):

That sick turn card sent Shifubowa home out in 3rd place, and he collected $60 for his finish. Heads up play began, and reDZill4 had over a 4:1 chip leader over Gator:

In the very first hand, reDZill4 decided to go for the win, and get it over with right away:

However, Gator’s ace high held and now we had ourselves a match! Gator would go on to win a couple big pots, and steal the chip lead from reD:

Gator was now up 26k to 18k. It looked as if he might just walk away with it, but then reDZill4 went on an insane stretch, winning 13 out of the next 15 hands! 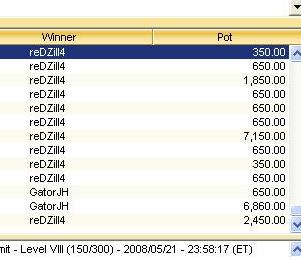 After the domination from reD, they were now virtually dead even:

However, reDZill4 got a little too aggressive for his own good:

And the 3 barrel bruff doesn’t work as Gator calls down with top pair! reDZill4 took 2nd for $90, and GatorJH was your game 2 champion earning $150 and 182 points! Congratulations to him, he certainly had his luckbox on tonight! Now for the 3 hands:

With spenda’s image, getting it in with AKs here and being in a bad of shape as he was in, was very unlucky.

WTF was he Thinking?

This is just sick, definitely not standard so it qualifies (imo).

Beat of the Night

I realize this isn’t a bad beat, just a flip, but with swiggidy losing his whole stack all with TT in 3 hands – pretty bad luck.

The FTR Gauntlet is played every Wednesday at 10:00 PM EST, and Sunday at 3:00 PM EST. Join us next Sunday, which will be the first pot-limit Omaha8 game of the year!

The Gauntlet is FTR’s private poker league which has been running since 2004. It is now in the 7th season, and is bigger than ever. Each game has an $11 buy-in and you earn points every game based on how you finish. For information on registering for the Gauntlet, visit the Gauntlet Forum!

During the course of the season, players compete for more than just bragging rights as FlopTurnRiver adds some nice extra prizes. Even though felting your arch-rival forum member is loads of fun, it’s even more thrilling to win loads of cash! Play well and run good and you’ll work your way up the leaderboard. At the end of the season, 3rd place wins free FTR gear and $75, 2nd place receives FTR gear and $150, but everyone is shooting for 1st place which gets the FTR gear and $300, plus the beautiful and coveted FTR Gauntlet crystal trophy! That’s not all. Randomly, during the Gauntlet games, there will be special Bonus or bounty prizes announced, so make sure you show up for your full 16 games!