Since Black Friday, PokerStars, the largest poker room in the world, has gobbled up the online poker market.

The poker network snapshot below reveals the percentage of players online on April 10, 2011, a few days before Black Friday. The pie graph clearly conveys PokerStars’ top spot. The now defunct Full Tilt Poker was in second place; however, it only had half the players as PokerStars. Cereus, who folded after the events of Black Friday, was in third place holding about 4% of the market. The total market share of other networks, like Ongame and iPoker, comprised less than 15% of the internet poker market. (Note – The graphs are missing data from Party Poker.)

What has changed? Check out the snapshot of the poker networks on December 15, 2011.

The PokerStars software is smooth, slick, and intuitive. The PokerStars last hand history function is also the best of any internet poker room. You can even customize the look of the tables with different themes. Overall, PokerStars’ software feels like it was developed by professionals. Other rooms (cough…Bodog…cough) have software that that looks and feels like it was developed by a high school computer science class, who really liked the color red, that smoked meth, rock cocaine, and plastic army men.

No matter the day or time, PokerStars always has a ton of cash games, tournaments, and sit and gos. You can play for pennies or hundreds of dollars. Better yet, PokerStars offers more than Texas Hold’Em. Log on to their site (no not you, USA player) and you’ll find Omaha, 7 Card Stud, Razz, five Card Draw, Horse, and Badugi. Rumour is PokerStars will offer Magic The Gathering booster drafts next year.

Most important of all, PokerStars has a stellar reputation. Its support staff is excellent, answering emails in a timely manner and even having a presence in many online poker forums. Even US players, who can no longer play at PokerStars, would vouch for PokerStars. Unlike Full Tilt Poker and Cereus, PokerStars paid out millions of dollars after Black Friday to its US customers.

As you can see by both of the pie charts, PokerStars actually increased its stock in the online poker world by 20%, 8 months after the events of Black Friday. Their overall numbers did drop by about 32,000 players, but the entire online poker industry took a hit, mainly with the absence of Full Tilt Poker.

Even with a 32k player loss, PokerStars is starting to pick up more heat. Just look at the graph below, which shows the sites traffic over the past year, to see how PokerStars has rebounded after the events of Black Friday (which is marked by the red line): 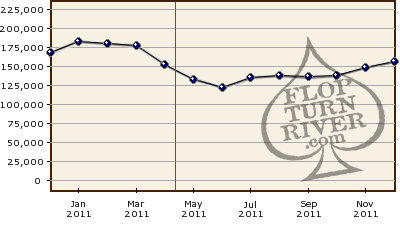 PokerStars has even managed to break new world records after Black Friday, and you can see by the below graph that they are able to pull in well over 400,000 players: 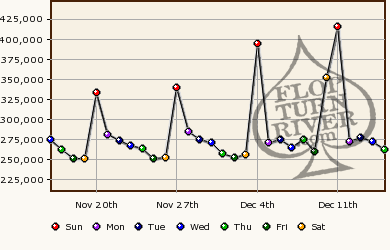 Is there anyone out there who can stop PokerStars?