The Sunday Million 9th Anniversary tournament will take place on Sunday, March 15 at 14:30 ET. The tournament will feature a regular $215 buy-in, but players can also win entry through satellites for as little as $1 or 50 Frequent Player Points (FPP).

Team PokerStars Online Pro Lex Veldhuis had this to say about the upcoming event:

“There aren’t too many one-off tournaments that are an absolute ‘must-play’, but the Sunday Million Anniversary event is for sure. Winning a $1m+ first prize from just $215 – or even less if you satellite in – is an unreal opportunity. I’ll be taking a shot as usual and hoping I can bink a huge score.”

On top of the regular satellites, PokerStars is also offering two Deadline satellites on the day of the tournament–one with an $11 buy-in with 1,000 guaranteed seats, the other a $33 buy-in with 333 seats. Special feeder satellites int these two tournaments are running every hour and cost only $1. 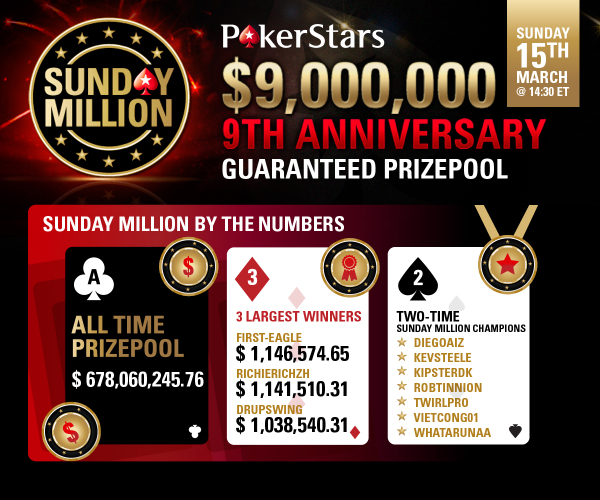